If you're looking for investing ideas to begin the new year, Warren Buffett's Berkshire Hathaway portfolio isn't a bad place to start. After all, he's one of the world's greatest investors, having amassed a net worth estimated at $89 billion. He's also made a fortune for long-term investors in Berkshire Hathaway.

When Buffett buys shares of a company, he looks for well-known brands that have established a competitive advantage. Then he plans to hold those shares indefinitely, watching them grow.

Right now, there are about 50 securities in Berkshire's portfolio. Let's take a look at three -- Apple (NASDAQ:AAPL), Amazon (NASDAQ:AMZN), and Mastercard (NYSE:MA). All have competitive advantages, all have promising growth prospects, and all are worth buying and holding for the long term. 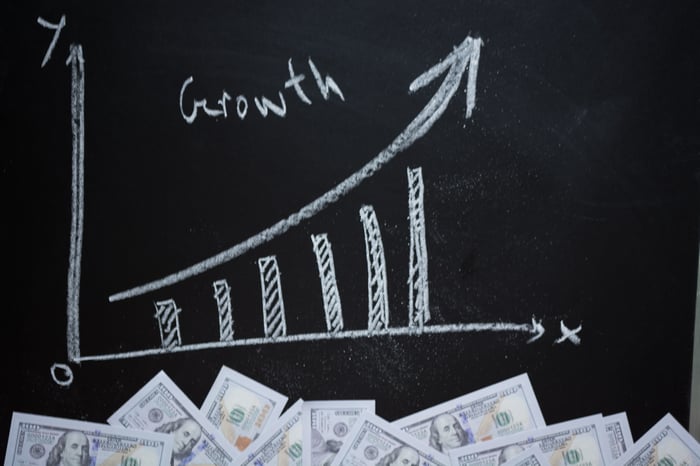 Apple: It's not just iPhones

Apple is by far Berkshire's largest stock position, accounting for roughly 25% of the Berkshire Hathaway portfolio. And it crushed the market in 2019, rising 85% compared to the S&P 500's 29% increase (through Dec. 30).

Apple shares have surged even while iPhone sales have slowed. That's because the company is growing other revenue streams. Apple's services -- things like the App Store, Apple Music, and Apple Pay -- are becoming a bigger part of overall revenue. In fiscal year 2019, which ended Sept. 28, services accounted for $46.3 billion in revenue. That was 18% of the company's total revenue, up from 15% the previous year. That growth is important, because services have much higher gross margins than Apple products -- 63.7% compared to 32.2% in 2019.

The prospect of services growing even larger and driving greater profitability has helped fuel the stock's rise. So has the "wearables, Home and accessories" segment. It has nearly doubled revenue in two years, from $12.8 billion in 2017 to $24.5 billion in 2019. Growth accelerated from 36% in 2018 to 41% in 2019.

Services and wearables have helped offset a decline in iPhone revenue, but iPhone sales remain critical. They accounted for $142 billion in FY2019. Although that's a 14% year-over-year decline, it was still 55% of the company's revenue. iPhone sales help fund share buybacks and boost quarterly dividend payments, which have risen 35% since early 2017 and are now $0.77 per share, for a yield around 1%.

Given Apple's customer loyalty, the growth prospects in services and wearables, and the attractiveness of rising dividend payments, Apple remains a compelling buy.

Amazon: Investing in its future

Unlike Apple, Amazon lagged the S&P 500 in 2019. Shares were up 23% as of this writing, nearly 6 percentage points behind the market and the company remains about 10% below its all-time high, set in September 2018.

Investing in growth isn't a new strategy for Amazon, which has been willing to sacrifice short-term profits to better position itself for the future. Here's why the current strategy makes sense:

Amazon is the undisputed leader in e-commerce, but the company isn't taking that for granted. For long-term investors, a rare year in which Amazon has trailed the market could be an opportunity.

Mastercard: A powerful network with a strong tailwind

Mastercard is known as a credit card company, but describes itself as a technology company in the global payments industry. That's a more accurate description, because Mastercard uses its technology to complete various types of digital transactions. The company makes money by taking tiny fees from transactions. Those fees add up to billions of dollars and have driven huge stock gains. Mastercard is up 58% in 2019 as of this writing, doubling the S&P 500's gain. It's risen nearly 240% in the last five years, compared to the S&P 500's 54% increase.

The company does business in 210 countries and territories, and continues to expand partnerships with financial institutions. For example, Apple launched its Apple Pay credit card in August. Goldman Sachs is the financial institution, while Mastercard is the payments network. The more transactions that occur, the more fees Mastercard will receive.

Mastercard also is benefiting from a global trend termed the war on cash. As people steadily move away from cash payments to digital payments, Mastercard stands to benefit. Through the first nine months of 2019, revenue was up 15% year over year. That's steady growth, but the more impressive numbers were below the top line. The company's adjusted operating margin was an impressive 58.3% -- a 1-percentage-point improvement; and adjusted earnings per share grew 21%.

The company has authorized more share buybacks, which will help improve earnings per share. And income investors should like this: Mastercard announced in December that it would be hiking its quarterly dividend 21%, to $0.40 per share. The stock currently yields less than 1%.

The combination of a rising dividend and continued growth prospects makes Mastercard a strong choice.