It's important to have goals, but is Plug Power's (NASDAQ:PLUG) plan to hit $1 billion in revenue by 2024 reasonable, or is it just pie-in-the-sky wishful thinking?

Considering the hydrogen fuel cell manufacturer generated almost $185 million in gross billings in 2018, the five-year plan laid out at Plug Power's September symposium would seem to be a case of simple daydreaming. Even with revenue up 15% through the first nine months of 2019, the 10-fold leap in gross bookings necessary in five years is still a long way from the 40% compounded annual growth rate required to hit the target.

The market, however, rewarded Plug Power for its optimism with a 150% stock gain last year, but that enthusiasm needs to be tempered with the reality of a decade of investor disappointment. So let's see whether the hydrogen fuel cell maker really has the power to reach its $1 billion goal. 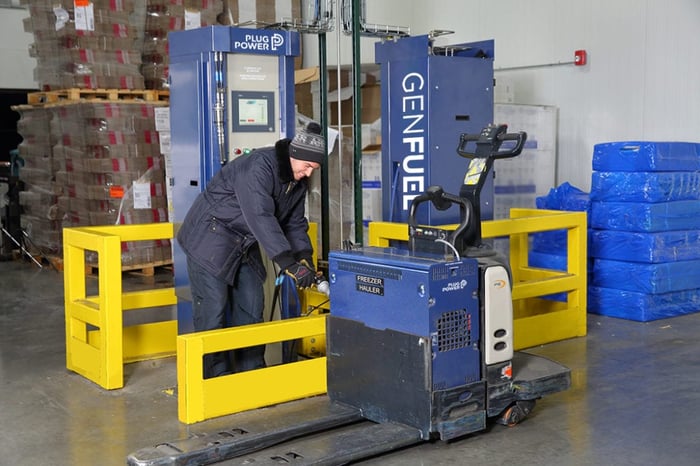 Industrial applications at its heart

The impetus behind Plug Power's goal is fueling further growth in its primary material handling business, or making hydrogen fuel cells that power forklifts in warehouses and distribution centers.

Plug Power has shipped over 28,000 fuel cells to dozens of customers to date, but Walmart (NYSE:WMT) and Amazon.com (NASDAQ:AMZN) are its two biggest, together representing over two-thirds of total revenue. At 44% of the total, Walmart is by far the biggest, and most of the growth Plug envisions over the next five years is forecast from expanding its relationship with the offline and online retailers.

It also intends to add at least one additional multi-site customer, while expanding overseas so that it is shipping 25,000 annually by 2024.

Plug Power sees it as a $30 billion global opportunity, with more than 6 million forklifts deployed that can be retrofitted with Plug's hydrogen fuel cells, which is why Plug says it's "comfortable" with its ability to deploy so many new systems each year. Doing so will allow it to hit $750 million in revenue in this segment.

Bolstering its belief was Plug deploying 1,700 GenDrive fuel cell systems at Walmart, Kroger, and Sysco in the third quarter, while also touting a list of major automobile manufacturers it has lined up to begin testing its technology, including BMW, Daimler, General Motors, Honda, VW, and most recently Fiat Chrysler. It says growing such new and old customers would allow it to triple segment revenue.

Can it do that, though? Although Plug reiterated its full year guidance of $235 million to $245 million in gross billings, and year to date it has recorded over $142 million, that means it will need to generate another $100 million in the fourth quarter to achieve that goal, a 60% increase over what it recorded in the year ago period.

Not only does that seem like a tall order for the current quarter, but it will need to continue growing sales like that every year for the next four years.

Moving on to street-legal vehicles

Plug Power estimates it will generate another $200 million in revenue from a greater shift to on-road vehicle adoption of its fuel cell technology, which it sees expanding the total addressable market ten-fold.

Plug already supplies hydrogen fuel cell-powered engines for global delivery giant DHL, securing in May a deal to supply 100 trucks for DHL with fuel cells. It quotes DHL's head of DHL Express operations in Germany as saying, "If everything works as we imagine it would, there could soon be 500 vehicles worldwide."

The last $50 million in revenue will come from stationary applications, such as power stations or data centers. Plug Power is the biggest user of liquid hydrogen at over 22 tons per day, more than that used by NASA.

Flooding the market with stock

The biggest problem for Plug Power doesn't seems to be in its potential, but rather in its execution as it affects investors.

The fuel cell maker has a long history of destroying shareholder value, and even today it continues to dilute investors by issuing more stock. In early December Plug Power raised another $100 million by issuing an additional 40 million shares priced at $2.75 each. With around 242 million shares outstanding at the time, the stock sale amounted to a better than 16% dilution of existing investors.

Nor has it been able to grow its sales profitably. Even with the gains generated so far in 2019, losses have widened to almost $74 million and operating cash flows have been a $52 million use of cash compared to less than $42 million a year ago.

It seems that although Plug Power looks like it has the capability to potentially achieve its $1 billion sales forecast, it will require perfect execution. And even if it does hit its goal, that doesn't mean it will do so profitably. Moreover, over the next five years, Plug Power will likely have substantially diluted existing shareholders' stakes even further.

With Plug Power's stock having come so far so fast in 2019, it would undoubtedly suffer a collapse if it does not make any of its lofty targets at any point along the way. It may be a less risky stock from a business perspective than it was a decade ago, but it seems to offer the same investment risks as it did back then.