Please ensure Javascript is enabled for purposes of website accessibility
Log In Help Join The Motley Fool
Free Article Join Over 1 Million Premium Members And Get More In-Depth Stock Guidance and Research
By Scott Levine - Oct 5, 2019 at 10:45AM

This fuel cell leader has been plugging along for years, and management sees sharp growth in the coming years. But does that mean it's time to add it to your buy list?

With more than 100 global climate strikes now in the rearview mirror, investors may be left wondering if now is the time to initiate -- or increase -- positions in renewable energy companies. Among solar power companies, electric vehicle manufacturers, and other clean energy-affiliated businesses, though, the choices may seem overwhelming. So let's narrow our focus and take a closer look at Plug Power (PLUG -0.14%), a global leader in fuel cell solutions.

Having risen more than 108% year to date, shares of Plug Power have been on a tear so far in 2019. You might assume that the stock has gotten ahead of itself and doesn't offer a compelling buying opportunity, but it would be foolhardy to make a snap judgment such as this -- especially considering the bright future management sees on the horizon. 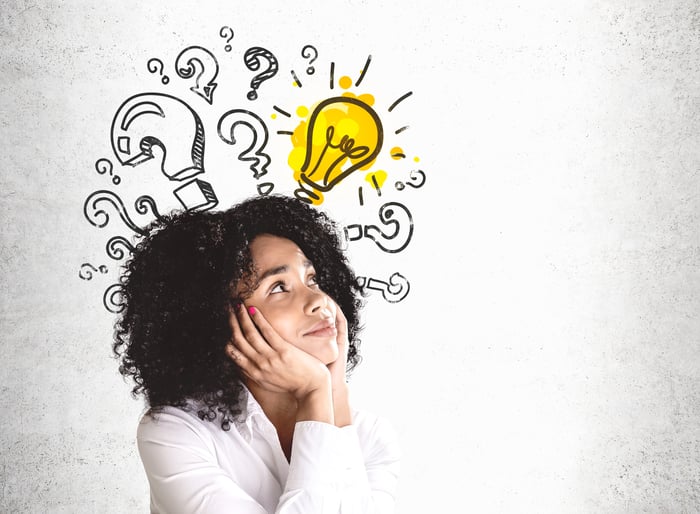 Investors counting themselves among Plug Power's most ardent supporters will point to the fact that the company has excelled at growing sales over the past few years. From 2014 to 2018, for example, the company has grown its annual top line from $64 million in 2014 to $175 million in 2018. While the compound annual growth rate of more than 28% over the past five years may seem impressive, it pales in comparison to what management foresees in the next five years. According to a recent investor presentation, management expects the top line will grow to an eye-popping $1 billion in 2024. While material handling sales are expected to account for the lion's share of this forecast, about $750 million, electric vehicles and stationary power solutions will contribute $200 million and $50 million, respectively.

But it's not only the top line where significant growth is projected; management also anticipates profitability to emerge. For one, the company's gross margin is expected to skyrocket from 1.5% in 2018 to more than 30% in 2024 due to cost reductions in all aspects of the company's business: fuel cell equipment, service and power purchase agreements, and fuel delivery. 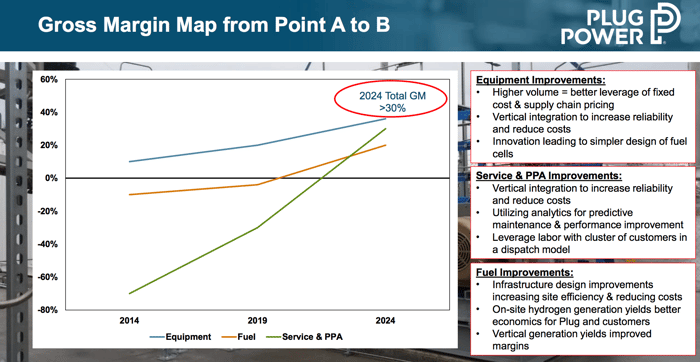 In addition to gross profit growth, management believes the improved profitability will continue farther down the income statement. Besides believing Plug Power will generate operating income of $170 million in 2024, management expects the company will report adjusted EBITDA of $200 million.

While bears will argue...

For investors familiar with Plug Power, management's ambitious outlook comes as little surprise, for the company is no stranger to grandiose forecasts. And while the company has taken steps in 2019 to mend its relationship with shareholders, pessimists will contend that the company hasn't come far enough to erase the memory of overzealous forecasts such as those made in 2013 and 2016, so the promise of profits in 2024 should be taken with not a grain of salt, but rather a heaping tablespoon.

Besides exercising caution about whether Plug Power will achieve its profitability targets, bears will question the degree to which the company is willing to sacrifice its financial health in pursuit of its goal. At the end of 2018, for example, the company had a net cash position of $21.7 million; however, Plug Power has taken on a considerable amount of debt in 2019 to help fund its future growth. How considerable? As of the end of Q2, the company had a net debt position of $79.9 million. This debt-laden balance sheet is even more concerning in light of the fact that the company doesn't generate operational cash flow. In other words, it seems further reliance on debt and the raising of equity also lie in the company's future -- the latter of which is also familiar to investors. 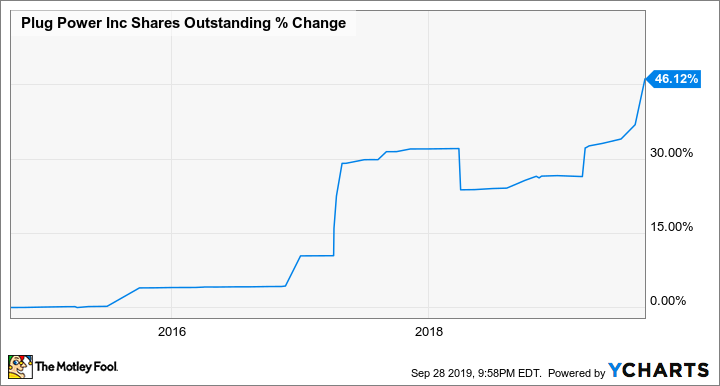 Lastly, bears would be reluctant to pick up shares of Plug Power considering the price tag seems unattractive at the moment. Since the company doesn't report a profit or generate positive cash flow, we're left with evaluating the stock in terms of its price-to-sales ratio. Currently Plug Power's stock is trading at 3.04 times sales. While this is a discount to its five-year average multiple of 4.36, it doesn't seem like enough of a discount to warrant the substantial risk that an investment in the company represents; moreover, the stock still seems pricey considering the S&P 500's multiple of 2.18.

Is it time to build a position in Plug Power?

Despite management's impressive imagining of what lies ahead in the next five years, the company's track record of failing to meet expectations suggests that investors -- except those with ample thresholds for risk -- would be better served by watching this story play out from afar. In the remainder of 2019, nonetheless, I'll be watching to see if the company achieves its forecast of EBITDA and cash flow forecasts. If it does, it may indicate that the company is, in fact, on an upward trajectory.