The U.S. military executed a drone strike against one of Iran's top military leaders in Iraq. The move sparked fears that it would further escalate tensions in the Middle East, which could disrupt the flow of oil out of the region.

Crude prices shot up on the news. The U.S. oil benchmark, WTI, rallied nearly 4% to more than $63 per barrel by 10:30 a.m. EST on Friday, which was its highest level in eight months. The uptick in oil prices is fueling big gains in energy stocks, especially of smaller oil and gas producers. Leading the way are Centennial Resource Development (NASDAQ:CDEV), Extraction Oil & Gas (NASDAQ:XOG), Denbury Resources (NYSE:DNR), W&T Offshore (NYSE:WTI), and Whiting Petroleum (NYSE:WLL). Each one rallied more than 10% at some point on the day. 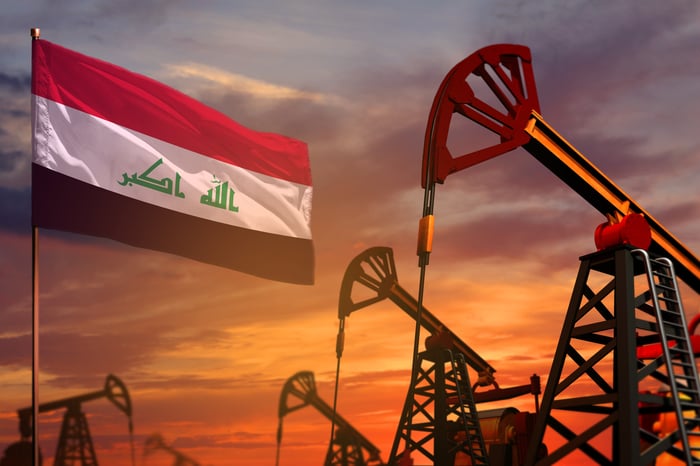 The air strike against the Iranian military commander -- who the U.S. believed was planning attacks against the country's interests in Iraq -- could cause Iran to respond. Iranian-backed militias operating in Iraq, for example, could work to shut down oil fields. Meanwhile, Iran could try stopping the flow of oil out of the Persian Gulf to drive up oil prices and harm the U.S. economy. If tensions continue escalating, analysts believe that could push crude prices up to between $80 and $90.

The prospect of even higher oil prices is driving up shares of oil producers, with smaller drillers seeing the biggest boost. That's because many would benefit from a further improvement in crude prices, as it would enable them to generate more cash that they could use to bolster their balance sheets and growth prospects.

Denbury Resources and Whiting Petroleum, for example, have been concentrating their efforts on improving their debt-laden balance sheets. Both companies have been selling assets as well as keeping a tight lid on capital spending so that they can chip away at their debt. With crude prices rising, Denbury and Whiting would produce more excess cash, which would enhance their debt repayment efforts.

Meanwhile, drillers like Centennial Resource Development, Extraction Oil & Gas, and W&T Offshore would also benefit from higher prices because they'd generate more cash, which they could use on a variety of initiatives. Extraction Oil & Gas, for example, could use the extra money to buy back more stock as well as continue repurchasing its debt at a discount. During the third quarter, the driller bought back $100 million in shares and spent another $11 million to repurchase $14 million of its notes. It could accelerate those efforts if oil keeps rising.

W&T Offshore, on the other hand, could use the additional funds to make more acquisitions. The Gulf of Mexico-focused producer spent $167.6 million to buy oil- and gas-producing properties in the region during the third quarter. The company noted that it's currently in a buyer's market, which could enable it to use its growing free cash flow to make even more accretive deals.

Centennial Resource Development could also use the extra cash from higher oil prices on expansion-related investments. The driller has been reducing its capital spending in recent quarters. However, it could reaccelerate if oil keeps rising.

Oil prices continue to push higher as the market shifts its focus from a slowing global economy to the potential for a shortage of crude supplies. Those concerns will likely grow unless there's a detente in the Middle East. Because of that, oil stocks -- especially shares of smaller producers -- could continue rising since higher crude prices will enable them to generate even more free cash that they can use to improve their financial situations and growth prospects. However, once fears start to fade, these stocks will likely give back at least some of these gains.