There wasn't much of anything left of value at Sears even before its bankruptcy, but of the assets it did still possess that retained monetary worth, the DieHard battery brand was arguably the most important.

However, Sears -- or Transformco, as it's officially known now -- sold DieHard to Advance Auto Parts (NYSE:AAP) for $200 million at the end of December, a seemingly deep-discount price that should help the auto parts retailer boost sales and expand into new markets. 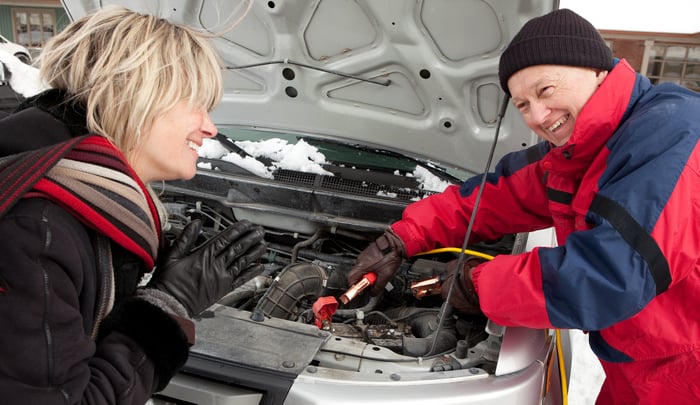 It was only a few years ago the value of Sears' KCD trio -- Kenmore, Craftsman, and DieHard -- was collectively pegged at around $3 billion. The Craftsman tool line was sold off to Stanley Black & Decker for $900 million, and though Kenmore had at one time been a premiere appliance brand, its star had long since faded, eclipsed by more innovative devices from Whirlpool, LG, and Samsung.

Yet DieHard endured. Unlike Craftsman and Kenmore, which were closely associated with Sears and its many failings, DieHard continued to command consumer interest. One of the smartest moves Sears Chairman and CEO Eddie Lampert did with the brand was to link it to the broader automotive market by rebranding one of its Sears Automotive Centers as DieHard Automotive Center.

Unfortunately, the concept was otherwise allowed to lie fallow, missing out on a rare opportunity to capitalize on the brand's inherent goodwill. It was so strong, in fact, that DieHard tires were the third most popular brand with consumers even though there were no DieHard tires at the time (there are now).

An anchor to its growth

On paper, DieHard probably looks as aged and threadbare as Kenmore. The market analysts at TraqLine say that as of the end of September, DieHard's share of the automotive battery market had shrunk to around 2.4%, down from 5.5% some five years prior.

But that was also due to the exclusivity Lampert imposed on the brand, only allowing it to be sold at Sears stores. With customers abandoning the retailer in droves and sales plunging from one year to the next, DieHard's ability to maintain any market share was an achievement.

Lampert did relax his grip on DieHard a bit in 2017 when he signed a deal with Amazon.com allowing the batteries to be sold on its website. He also partnered with LED flashlight maker Dorcy to manufacture DieHard-branded flashlights and other kinds of batteries beyond the automotive market. Those were some of Lampert's best decisions, but by then, Sears was too much of a foregone conclusion for them to actually matter.

But Advance Auto Parts has a chance to make a real difference with the brand.

A chance to spur big sales

In October 2018, Advance signed an agreement with Walmart (NYSE:WMT) to begin selling parts in a branded store, first on the retailer's website and then in its physical stores. It only really began rolling out in the second quarter of 2019, but now business is picking up, and as management mentioned during its most recent earnings call, the company already expects it to boost results next year and then materially contribute over the long term.

Introducing the DieHard brand into Walmart could substantially accelerate sales, especially as the next phase of the partnership could have shoppers buying automotive parts on Walmart's website but picking them up at an Advance Auto Parts store.

Advance has been investing heavily in its own "buy online, pickup in-store" initiative, and the company said results are positively impacting overall sales as they're becoming an increasing percentage of the total. Parts and batteries already account for over two-thirds of the retailer's revenue, so just breaking DieHard's tether to the Sears store should help Advance boost battery sales further.

Even greater opportunities ahead

But it's more than just batteries that Advance Auto Parts is looking at -- the company believes DieHard can open up completely new marketing opportunities, and it mentioned breaking into non-automotive markets such as sporting goods, lawn and garden, work clothes, and other new categories.

Because DieHard does still have a positive reputation with consumers despite its declining market share, having it owned by a company with some vision on where the brand can go in the future means Advance Auto Parts likely got this battery brand for a song.