Amazon (NASDAQ:AMZN) and Walmart (NYSE:WMT) have enjoyed a virtually free run in the Indian e-commerce space thanks to their financial muscle and the absence of major competition. But that's set to change now as Asia's richest man -- Mukesh Ambani -- has now officially unveiled his e-commerce venture: JioMart.

Ambani's Reliance Retail has been slowly laying the groundwork for the launch of a hybrid e-commerce business involving both online and offline channels. From pulling its products from Amazon and Walmart's marketplaces to reaching out to local mom-and-pop stores through its mobile app, Reliance Retail has been preparing itself to carve out a big piece of the lucrative market for itself. 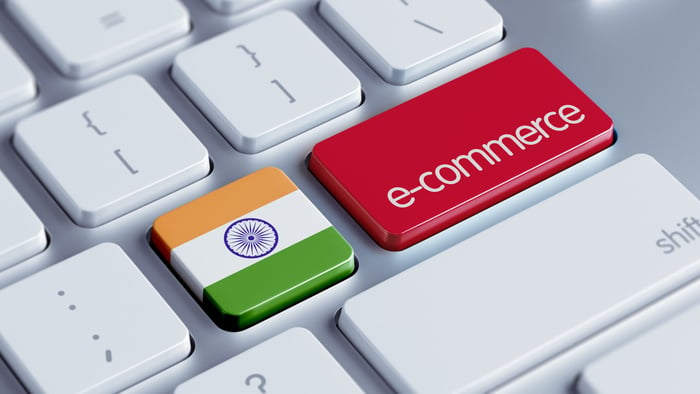 JioMart arrives with a bang

JioMart will initially be launched in three major suburbs of India's financial capital Mumbai, according to a report in Indian financial daily Mint. During the pilot phase, Reliance Retail will offer more than 50,000 grocery products online to shoppers.

What's more, JioMart is going to provide free home delivery to customers regardless of order value. The fact that consumers won't have to meet a minimum order value and are also being promised fast delivery times could turn the heat on Amazon and Walmart in India.

JioMart is also going to make product returns easier for customers with a no-questions-asked policy. Reliance Retail plans to gradually expand this service into more markets to include more products. And doing so won't be a big deal for the Ambani-led company, thanks to its existing physical footprint.

Scaling up won't be a problem

Reliance Retail eventually plans to connect 30 million offline retailers in the country with more than 200 million households across India through its e-commerce platform. This indicates that Reliance is aiming to corner a huge portion of India's e-commerce market in the long run. The target might seem ambitious right now, but Reliance has a ready network of supermarkets, online portals, neighborhood stores, and hypermarkets that will come in handy.

In all, Reliance Retail has more than 10,000 stores in India -- covering over 6,600 cities and towns -- that add up to more than 22 million square feet. JioMart can use this extensive network to quickly expand into more cities and bring quick deliveries of groceries and other items to millions of customers.

But the biggest weapon in JioMart's hand is a huge database. Reliance's telecom arm is the second-largest telecom service provider in India with a market share of nearly 31% and a subscriber base of more than 364 million. Not surprisingly, Reliance is using its massive telecom subscriber base to promote JioMart.

The Mint report points out that Reliance Retail has started sending invites to Jio subscribers for signing up to JioMart. What's more, customers pre-registering for JioMart can save up to 3,000 rupees (approximately $42 at current exchange rates), which will lure more users into its ecosystem before operations begin.

As such, JioMart has the potential to quickly build up a customer base running into the millions across several Indian cities once Reliance starts scaling up this venture.

Amazon and Walmart's free run in India is almost over

Amazon and Walmart have been vying for the e-commerce crown in India for some time now, cornering more than half of the overall market in the absence of a major third rival. But the American giants have been hit hard by regulatory changes in India's e-commerce rules, and they're also facing the wrath of millions of small merchants.

The Indian government has been probing Amazon and Flipkart -- Walmart's Indian e-commerce arm -- for accusations of predatory pricing. India's commerce minister Piyush Goyal pointed out in Oct. 2019 that the likes of Amazon and Walmart have "no right to offer discounts or adopt predatory prices" as that would cause losses for the country's small retailers.

But Reliance might not be facing such scrutiny. We have already seen that JioMart is offering a nice sign-up bonus to customers, and it could bring more lucrative offers in the future to boost its customer base. And the Indian government might not put any obstacles in Reliance's path given the proximity of Mukesh Ambani to Indian Prime Minister Narendra Modi.

After all, Ambani was able to launch his telecom service for free back in 2016 and didn't charge a single penny to subscribers for three months for calls and high-speed data services. This allowed Reliance to build a massive telecom subscriber base in India in a short time, upsetting the established order.

If Reliance decides to follow a similar playbook with JioMart, it could get off to a great start and derail the momentum Amazon and Walmart have been enjoying in India's consumer discretionary space so far.