Shares of CrowdStrike (NASDAQ:CRWD) shed 14% of their value in December, according to data from S&P Global Market Intelligence . The cybersecurity stock dipped after the company reported its third-quarter results early in the month. 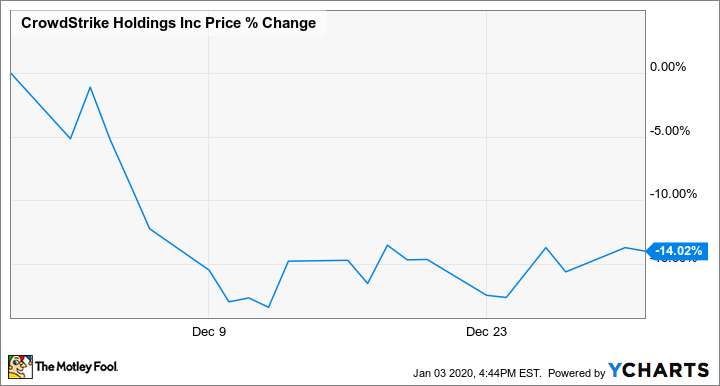 CrowdStrike published its third-quarter earnings on Dec. 5, and results came in ahead of the market's targets. The company posted a non-GAAP (adjusted) loss per share of $0.07 on sales of $125.1 million, topping the average analyst estimate's call for a per-share loss of $0.12 on revenue of $118.8 million.

CrowdStrike's subscription revenue climbed 98% year over year in the third quarter to hit $114.2 million. Annualized recurring revenue for the October quarter wound up at $501.7 million, up 97% year over year. Total sales for the period were up 88% year over year, and results in the quarter were generally encouraging. However, investors seemed to have expected more from the company's guidance for the fourth quarter and sold out of the stock ahead of a lockup expiration on Dec. 9.

CrowdStrike is guiding for an adjusted loss between $0.08 and $0.09 in the fourth quarter, with revenue for the period coming in between $135.9 million and $138.6 million. The initial publication of the third-quarter earnings release included a typo that omitted a digit from the second figure in the fourth-quarter sales target, showing $38.6 million instead of the proper figure of $138.6 million, which may have factored into the stock's poor performance following the release.

The cybersecurity company actually raised its guidance for the full-year period, and the fourth-quarter sales target came in ahead of the average analyst estimate. The analyst target had called for revenue of $127.2 million, but it looks as if the third-quarter performance beats and better-than-expected fourth-quarter guidance weren't enough to keep investors in the stock ahead of the massive lockup expiration.

CrowdStrike is up roughly 49% from its $34 opening price on the day of its initial public offering in June 2019, but it trades down roughly 8% from its closing price on the day of its market debut. The company is growing sales at a rapid clip and expects to be free cash flow-positive for the current fiscal year, but it still trades at a lofty multiple -- even in the context of the growth-dependent cloud services space.

CrowdStrike is valued at roughly 22 times this year's expected sales.