In investing, you also run into parent-child pairs, and sometimes it's a tough call whether to buy the parent company or its subsidiary. Take, for example, asset management company Brookfield Asset Management (NYSE:BAM). It's the parent of several master limited partnerships (MLPs) and subsidiaries, including MLP Brookfield Infrastructure Partners (NYSE:BIP).

Both parent and child had a stellar 2019. So which one is the better buy as we head into the new year? Let's find out. 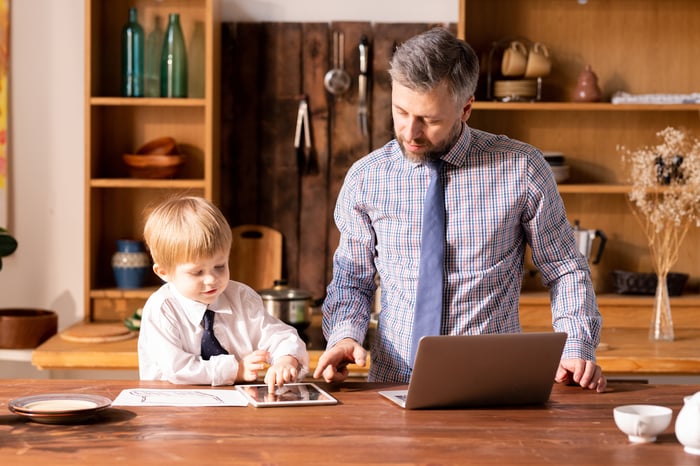 The stock market is full of parent-child pairs. But which will come out on top? Image source: Getty Images.

A piece of the pie

There are a few things to know right up front about these companies. First, as an MLP, Brookfield Infrastructure has a different structure than a traditional corporation. Instead of selling "shares" of stock to "shareholders" and paying a "dividend," it sells "units" and pays a "distribution" to its "partners." One of those partners -- the largest unitholder and manager of the partnership -- is called the "general partner." In this case, Brookfield Infrastructure's general partner is -- surprise! -- Brookfield Asset Management.

As its name implies, Brookfield Infrastructure Partners is a pure infrastructure play. The MLP owns a global and diversified group of infrastructure holdings, including telecom networks, energy grids, railroads, pipelines, highways, and ports. Meanwhile, Brookfield Asset Management not only owns its share of these assets, but also shares of the other MLPs in the Brookfield portfolio, including real estate holdings from Brookfield Property Partners and renewable energy holdings from Brookfield Renewable Partners. Its recent purchase of Oaktree Capital has given it exposure to specialty credit markets as well.

So the big question is what's better in this case: Owning a whole apple pie, or owning slices of many different kinds of pie? The answer probably depends on what you're hoping to get out of your investment.

If you're in the market for a dividend-paying investment, there isn't much of a choice. While the entire Brookfield family has a solid history of regular dividend/distribution increases, the yields of these two investments are vastly different. MLPs often generate superior yields thanks to their structure, and Brookfield Infrastructure's current 4% yield trounces its parent's lackluster 1.1% yield.

However, owning Brookfield Infrastructure Partners outright might be tricky for some income investors. Because of their favored tax status, MLP unitholders have to fill out some extra paperwork around tax time. MLP units also may not play well with certain types of tax-advantaged accounts -- particularly retirement accounts. If you're looking for an investment for such an account, you may have no choice but to go with Brookfield Asset Management...for now.

It's worth noting that, thanks to strong share price growth since 2016, the yields of both these investments have fallen sharply over the past three years.

In case of recession, break glass

Quite frankly, both parent and child have similar advantages. Because they're part of the same family, management quality is quite high for both. Both have seen share price growth in recent years, and they even trade at similar valuations. However, there's one way in which they might differ in the near future.

The U.S. is now well into the longest uninterrupted bull market in history. And while the Brookfield family is technically based in Canada, these investments are primarily traded on the NYSE. At some point, we're due for a recession. There's disagreement about whether that will come in weeks, months, or years, but when it does arrive -- which it has to at some point -- the portfolio of Brookfield Infrastructure is more likely to weather the storm. That's because we use infrastructure -- to heat our homes, make phone calls, and drive to the grocery store -- regardless of how well the economy's doing. By contrast, some of the investments held by Brookfield Asset Management -- distressed credit, for example, or retail real estate -- may not fare so well.

Just take a look at how (relatively) well Brookfield Infrastructure performed versus its parent in the last recession: 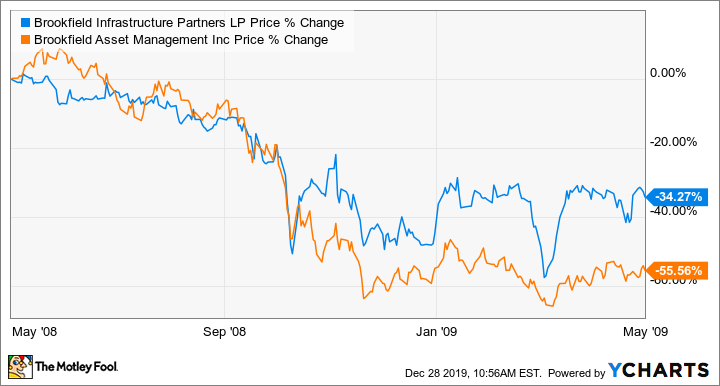 This could tip the scales in Brookfield Infrastructure's favor for investors concerned about capital preservation.

With its superior yield, excellent management team, and more recession-resistant portfolio, Brookfield Infrastructure Partners is going to be the better buy for most investors. However, those who are looking for an investment for a tax-advantaged account may not be able to invest. For these investors, Brookfield Asset Management is certainly an attractive option, as long as it's not a high dividend yield you're after.

But what if you are looking for a dividend-paying stock for a retirement account that's unfriendly to MLP ownership? Well, you may want to wait until Brookfield Infrastructure Corporation begins trading (but expect that the share price may rise as others jump in as well). Otherwise, there are plenty of other solid dividend investments for you to consider.