While it might be tempting to make one large $10,000 investment on your favorite stock, a smarter approach is to invest like a venture capitalist. Don't be afraid of volatile, high-growth stocks. But do spread your risk out among several investments. One or more might be a loser, but you'll more than make up for it with massive gains on your winners.

For this posit, I'm picking four stocks from a variety of industries. All are high growth, with revenues for each company increasing 40% or more year over year. None are profitable yet, although one achieved profitability under generally accepted accounting principles (GAAP) in its most recent quarter. I believe these stocks will crush the S&P 500 over the next three years. Let's take a closer look at my four picks. 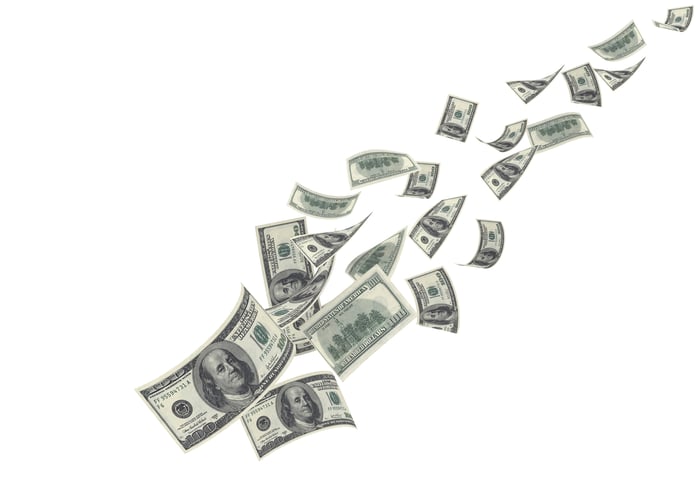 What's amazing about Shopify (NYSE:SHOP) is that it's the white knight of mom-and-pop retailers. You know all those companies that tried to compete with Amazon and went out of business? Now they're back and going strong -- with a little help. Imagine an army of mom-and-pop retailers with wonderful websites, awesome software, and fulfillment centers that deliver quickly and efficiently. That's what Shopify provides. It equips anybody and everybody to better compete with the top dog of retail in the world.

Every year since we bought it in January 2017, the darn stock has doubled. Last year it practically tripled. The market loves Shopify, which makes it a very expensive tech stock at the moment. It's trading at 32 times sales and 438 times forward earnings. There are stocks on this list that are much cheaper than Shopify -- and growing faster. And yet it would be almost immoral to exclude this stock from any buy suggestions. It might get cheaper in the future -- growth stocks are notorious for volatility and occasional big declines on their march to greatness -- but you can account for that by buying small lots along the way. Six shares at its current price around $404 a share = $2,424.

Carvana (NYSE:CVNA) is a very cheap stock. It's trading at four times sales. And that's after the stock tripled last year. The stock market is giving the company a tiny multiple because Carvana is a retailer and retailers generally have awful margins. What the market is forgetting is that two of the top-performing stocks of the last 50 years were both retailers -- first Walmart and then Amazon.

Carvana will one day be the largest car retailer in the world. The company is radically upending auto retail, a trillion-dollar industry that is very disaggregated and ripe for both disruption and consolidation. Those car towers you see on their selling lots are a sign of a marketing genius. If this were 1975 and Peter Lynch were driving by a Carvana car tower he would say, "What is that?" And then he would buy the stock. Thirty shares at the current selling price of roughly $94 apiece = $2,820.

I don't have shares of EverQuote (NASDAQ:EVER) yet, but it's definitely on my watch list. EverQuote is an internet platform where people go to find insurance rate quotes. The networking effect is very strong with this one. The more people go on the website to search for insurance, the more insurance companies sign up. Collaborators include Progressive, Travelers, MetLife, Nationwide, Farmers Insurance, Liberty Mutual and more.

In 2019 this small-cap stock was on fire, up 725%. The numbers are kind of amazing. EverQuote had $214 million in revenues last quarter, and it's growing that number by 61% year over year. And it's not just sales that are increasing. The rate of increase is increasing. When EverQuote went public in 2018, its revenue growth in its most recent quarter was only 28%. To make it even sweeter, small-cap EverQuote just achieved GAAP profitability in its most recent quarter.  And despite all this good news, the stock is still cheap, with a price-to-sales ratio of four. It's a tiny company right now ($883 million market cap), but it's in a sweet spot. Much like how Roku is revolutionizing the monetization of streaming media, EverQuote is working to change the trillion-dollar insurance industry. Seventy-five shares at the current selling price of roughly $33 a share = $2,475.

Amarin (NASDAQ:AMRN) just got an expanded label for its drug Vascepa. The drug lowers users' triglyceride levels. What are your triglycerides? They're the precursor molecules that eventually turn into cholesterol in your blood. High triglycerides can lead to heart attacks, strokes, and death. So lowering your triglycerides is a big deal. And the number of people who need to lower their triglycerides is sky-high: 25% of all adults, according to the Centers for Disease Control.  That's a market opportunity of 50 million people for Amarin, just in the United States.

Amarin had dramatic, 103% revenue growth before the FDA agreed in mid-December to allow a wider range of patients to be treated with the drug. Sales should escalate nicely in 2020. One hundred shares at a current average price of around $22 a share = $2,200.