Shares of Carvana (NYSE:CVNA) exploded last year as the used-car dealer continued to post blowout revenue growth aided by its unique vending-machine model that has won over customers. The stock also seemed to get a benefit from a short squeeze, as short-sellers have repeatedly been forced to buy back the stock. According to data from S&P Global Market Intelligence, the stock finished up 181% in 2019, following a 71% jump in 2018.

The chart below shows the stock's path. 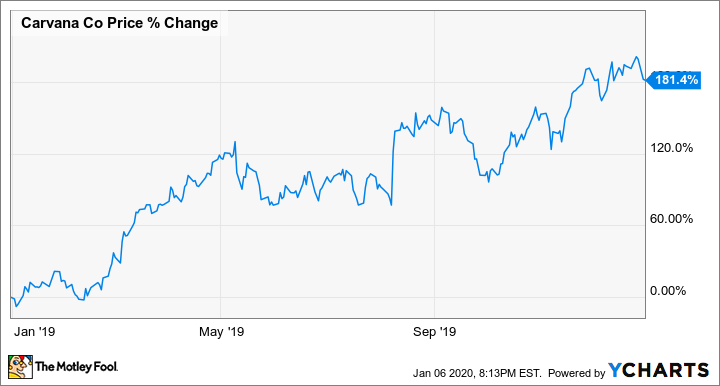 After trading flat for the first few weeks of the year, Carvana stock began to take off after its fourth-quarter earnings report at the end of February. The company reported another round of blockbuster growth, with revenue up 121% to $584.8 million, marking its 20th straight quarter of triple-digit revenue growth. The stock rose 7.3% on the news and marched higher over the following weeks as the company made a move that allows it to resell its loans and opened up in a number of new markets. 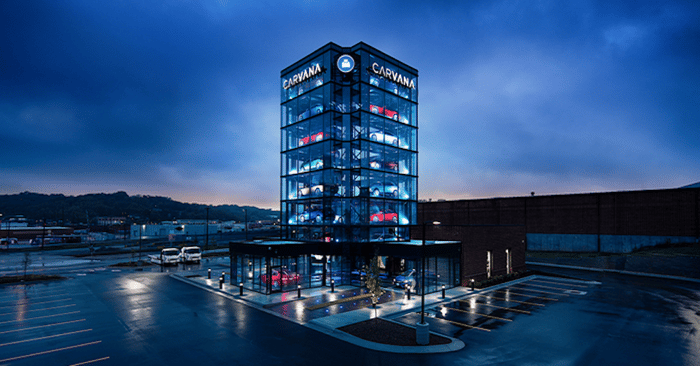 A short squeeze also seems to have contributed to the stock's gains through March and April, as the money-losing company has been popular with short-sellers. Currently, 53% of the stock is sold short, which helps explain its volatility. The stock pulled back in May as its first-quarter report wasn't enough to keep the rally going in spite of revenue jumping 110% to $755.2 million, and fell again later that month when the company announced a secondary offering.

After trading mostly flat for the next two months, shares spiked on a strong second-quarter report in the beginning of August as revenue easily beat estimates at $921.2 million, surging 108% to $986.2 million. The report showed the company's blistering growth continuing, bucking expectations of a slowdown.

Shares fell in September on a broad-based sell-off in growth stocks as the WeWork IPO collapsed, but then Carvana finished the year on a strong note, as it rebounded from an initial sell-off on its third-quarter earnings report, which included 105% revenue growth to $1.095 billion, its 23rd straight quarter of triple-digit revenue growth.

Carvana comes into 2020 with the stock still heavily bet against and the company is on track to lose more than $100 million in 2019. However, a company that has reported 23 consecutive quarters of triple-digit revenue growth and surged 732% since its 2017 IPO is clearly resonating with car buyers. Carvana's growth has to slow down eventually, but the company believes it can reach annual sales of more than 2 million cars annually, up more than 10 times what it's doing today.

While the stock is unlikely to triple again this year, as Carvana is now worth $14 billion, keep your eye on the top line, since that is likely to dictate the stock's trajectory going forward.