Wind power and solar energy are often discussed as a set in the conversation about renewable energy sources, but they are very different industries. The way they fit into the electrical grid is different, their efficiency is different, and they clearly receive different treatment politically.

That was evident late in 2019 when Congress struck a deal to extend the wind production tax credit (PTC) for one more year, but allowed the solar investment tax credit (ITC) to lapse. Ironically, the solar industry fought harder for a subsidy extension, but its appeals fell on deaf ears. 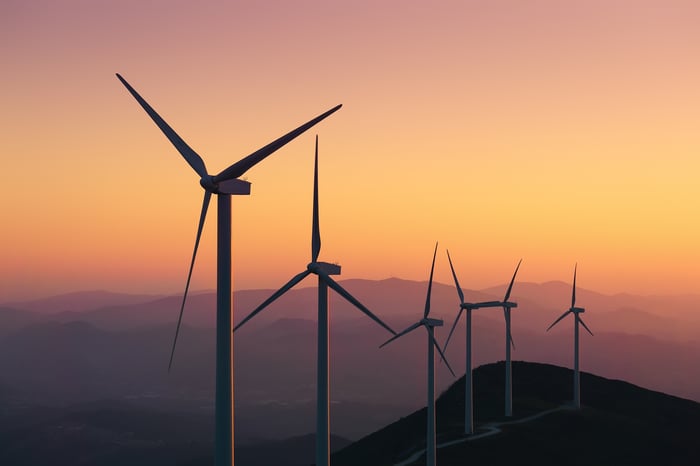 First, let's go over how these two tax credits work. The PTC is a tax credit that's based on the energy production of an asset. So, the PTC of $24 per megawatt-hour means that for the first 10 years of a wind turbines life, it gets 2.4 cents per kilowatt-hour of electricity produced. For perspective, the average residential consumer pays about 12 cents per kWh for electricity, and (after factoring in the subsidy) a wind farm's costs are as low as 1 cent per kWh. Basically, the subsidy is covering as much as 70% of the cost of electricity early in a wind farm's life.

The biggest beneficiaries of the wind PTC extension will be turbine manufacturers like General Electric (NYSE:GE), Siemens (OTC:SIEGY), and Vestas Wind Systems (OTC:VWSY.F). There will be much more demand for that equipment in the U.S. as developers continue to build cost-effective wind projects across the country.

There will likely be a marginal drag effect on the suppliers for large-scale solar projects if some developers choose wind over solar. First Solar (NASDAQ:FSLR), SunPower (NASDAQ:SPWR), and Canadian Solar (NASDAQ:CSIQ) are three of the biggest suppliers to utility-scale solar developers, and would have loved to have seen an ITC extension rather than a PTC extension. But they'll have to deal with falling subsidies in the solar energy starting next year when the ITC goes down to 26%, the start of a multiyear reduction in the subsidy.

The harsh reality is that lobbying in Washington, D.C., affects the economics of U.S. wind and solar projects. This past month, we saw that wind still carries a lot of weight in the nation's capital while the solar energy segment struggles to get its policies passed. In an industry where public policy is a key factor in economics and grid access, that will keep wind installations growing and leaves solar energy behind other energy sources that seem to be more favored by politicians at the moment.

From an investment standpoint, the PTC extension is the most critical subsidy to keep the industry growing. Over the last decade, wind installations have dropped off a cliff when the PTC has been expected to expire, which was in 2013 and then again at the end of 2019. This will give developers an incentive to keep investing in the technology.

The negative for solar is when developers are choosing between wind and solar for renewable energy developments. Many projects that may have gone solar will now use wind, an incremental loss of demand. It's just a shift of power in the renewable energy business, where there's still finite financing and demand to go around.

For the time being, wind is still king in Washington DC and that won't be changing anytime soon.