For mining-minded investors who are exploring the various opportunities which lie before them, Sibanye-Stillwater (NYSE:SBSW) certainly warrants consideration. With assets located in South Africa and the United States, Sibanye-Stillwater has significant exposure to both gold and platinum group metals (PGMs), including platinum, palladium, and rhodium. But digging the metals out of the ground isn't the company's only business; it also brandishes itself as "a globally leading recycler and processor of spent PGM catalytic converter materials."

Skyrocketing 251%, Sibanye-Stillwater's stock was one of the top performers among precious metal miners' stocks in 2019. For some prospective shareholders, this may suggest that the stock's no longer a bargain, and one would be better off foregoing it for other choices. This, however, could be a costly assumption, so let's dig deeper to see if the stock still provides a compelling opportunity. 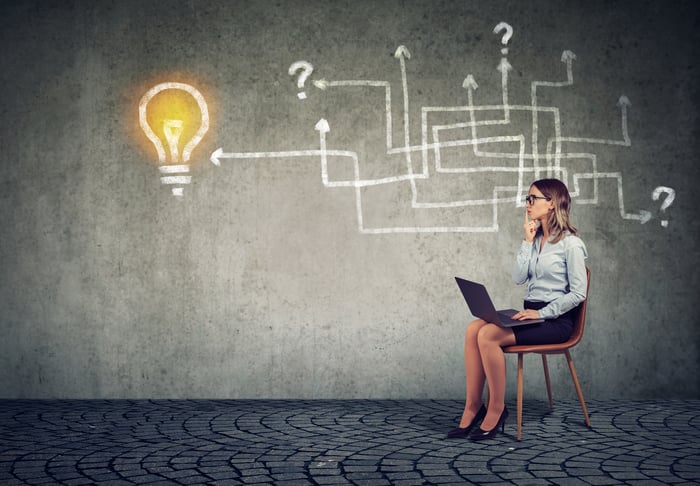 One of the things to like about Sibanye-Stillwater is the reduced amount of risk which the company represents thanks to its diversified portfolio. In 2018, for example, PGMs and gold represented 59% and 41%, respectively, of the company's annual metal production. So while the company can benefit from the upticks in the price of gold, platinum, palladium, and rhodium, a sharp downturn in the price of these commodities will not be ruinous for the company. The company's position among its peers is also worth noting: Sibanye-Stillwater touts itself as the largest primary producer of platinum, the second-largest primary producer of palladium, and a leading producer of both rhodium and gold.

Bulls will also point to Sibanye-Stillwater's recent success in shoring up its balance sheet and improving its financial health as other ways in which the company glitters. As of the end of the second quarter (the company reports financial results on a semi-annual basis), Sibanye-Stillwater had reduced its net debt to $1.5 billion -- its lowest level since the acquisition of Stillwater in May 2017. And in a recent update, management revealed that the company is making progress on its goal of deleveraging. With the company's net debt-to-adjusted EBITDA ratio of 1.7 as of the end of September, management expects to end 2019 with a ratio below the year-end leverage target of 1.8 -- notably more conservative than the 2.5 ratio which the company had as of the end of last June.

Despite the stock ripping higher in 2019, it still doesn't appear to be too richly valued. Currently, shares are trading at a very reasonable 1.95 times operating cash flow -- a discount to its five-year average multiple of 2.55, according to Morningstar.

While bears aren't quite convinced

Although there's a lot to like about Sibanye-Stillwater, naysayers aren't as enthralled with the opportunity afforded by the stock. For one, investors are left without the benefit of a dividend. Suspending the dividend in 2017, the company was trying to get its fiscal house in order after the acquisition of Stillwater. Management, however, didn't seem interested in forsaking the dividend indefinitely. Speaking with Reuters in February 2018, Neal Froneman, the company's CEO, said that the plan was to suspend the dividend for at least a year but resume payments eventually. Now, almost two years since he made that comment, the company has yet to reinstitute the dividend -- something which is noteworthy considering mining peers like Barrick Gold recently raised its quarterly dividend 25% to $0.05 per share.

Another source of concern is the fact that shareholders are often subject to dilution. Last April, for example, the company announced its intent to raise about $130 million through the issuance of approximately 109 million shares in order to "enhance balance sheet flexibility" according to the company's press release. 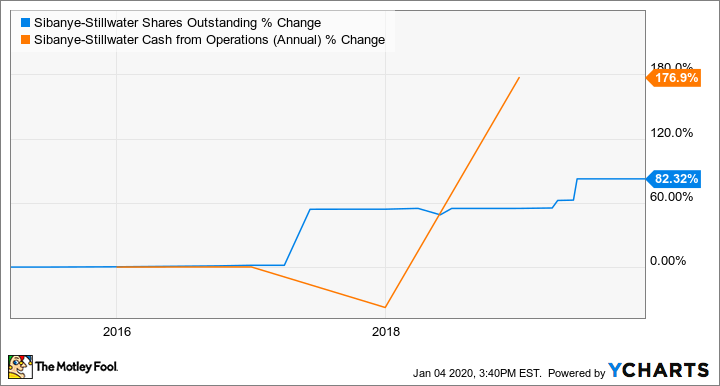 While the company has made some recent progress in growing cash from operations, it hasn't shown consistent growth, raising the concern that the company will have to raise additional capital through the issuing of shares in order to deleverage further or to help finance acquisitions.

Although there are valid concerns regarding Sibanye-Stillwater's stock, the compelling valuation offers a risk-reward ratio that I'd be willing to accept in the pursuit of gaining exposure to both gold and PGMs. And while the lack of a dividend is disheartening, there seems to be a glimmer of hope on the horizon. In a Q3 2019 operating update, the company noted that if it maintained momentum toward its long term targeted net debt-to-adjusted EBITDA ratio of 1, the company could "potentially resume dividend payments in the latter half of 2020."