After shares lost ground following a clinical trial failure in Tourette syndrome in December 2018, Neurocrine Biosciences (NASDAQ:NBIX) bounced back in 2019 with an eye-popping 50.5% return, according to S&P Global Market Intelligence.

The biotech's market-beating performance was supported by growing sales of Neurocrine's lead drug, Ingrezza; the filing for approval by the Food and Drug Administration for a new drug, opicapone, in Parkinson's disease; and the potential for an FDA label expansion for Orilissa, an endometriosis medicine.

Neurocrine Biosciences had hoped it could expand Ingrezza's use beyond tardive dyskinesia -- a movement disorder often occurring in patients taking antipsychotic medicines -- to Tourette syndrome. However, management announced in December 2018 that Ingrezza had failed in that indication, contributing to a 42% drop in its share price during the fourth quarter of 2018.

As it turns out, that sell-off was a great buying opportunity. 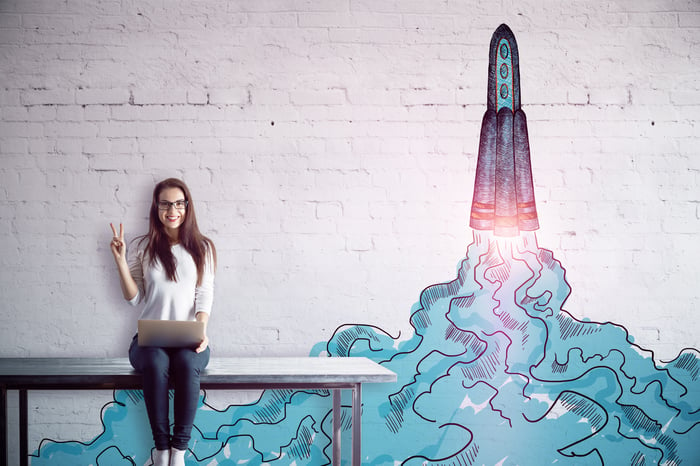 In 2019, Ingrezza delivered significant sales growth. The company filled 34,800 Ingrezza prescriptions in the third quarter, up from 19,400 in Q3 2018, and third-quarter Ingrezza revenue clocked in at $198 million, up from $111 million in the prior-year quarter.

Royalties on Orilissa from AbbVie (NYSE:ABBV) also increased in 2019. The drug was approved for use in August 2018; AbbVie's Orilissa revenue improved 50% sequentially to $27 million in the third quarter, resulting in about $4 million in royalty revenue to Neurocrine in the period. In Q2 2019, Neurocrine pocketed roughly $3 million in Orilissa royalties.

Altogether, Neurocrine's third-quarter 2018 revenue totaled $222 million, including milestone payments, up 46.4% year over year. Its net income totaled $53.8 million, or $0.56 per share, in the period. That's solid progress in both revenue and profit. 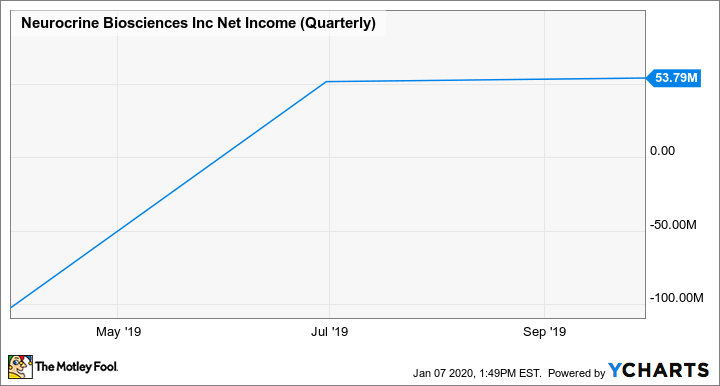 Investor interest may also have been sparked by the potential approval of Neurocrine's latest drug, opicapone, in the near future. The drug, which may help reduce "off-time" in Parkinson's disease patients taking levodopa (a commonly used drug in the indication), was licensed from Bial in 2017. It's already approved in the EU, and a U.S. decision is expected around April 26.

There's still plenty of reason for Neurocrine investors to remain optimistic. For instance, Ingrezza's addressable market is around 500,000 patients in the U.S. alone, so there's still a lot of opportunity for prescription growth despite its success so far.

Orilissa also appears to be overcoming a slower-than-expected launch thanks to a new marketing campaign, including direct-to-consumer ads. Additionally, Orilissa's target market could double to about 6 million patients in Q2 2020, if the FDA agrees to expand its label to include patients diagnosed with uterine fibroids.

Finally, opicapone could be a big winner if the FDA green-lights it in April. Roughly two-thirds of the 1 million Parkinson's disease patients in the U.S. take levodopa, and many of them see off-time increase as levodopa loses its efficacy over time.

Overall, there's no shortage of catalysts that could propel Neurocrine's shares higher. For risk-tolerant investors, continuing to own it could be wise.