A lot has changed in that time. Netflix (NASDAQ:NFLX) increased its pricing by $2 per month, Disney (NYSE:DIS) launched Disney+, Apple (NASDAQ:AAPL) launched Apple TV+, AT&T (NYSE:T) and Comcast (NASDAQ:CMCSA) have streaming services coming out in the near future, and various niche streaming offerings have come and gone. All the while, the price of traditional pay-TV continues to climb and virtual multichannel video programming distribution (MVPD) competitors have started raising their prices to be more in line with traditional distributors.

Those trends aren't slowing down -- just the opposite. As more and better streaming video options come to market and pay-TV prices keep climbing, investors should expect consumers' willingness to pay for streaming to keep improving. 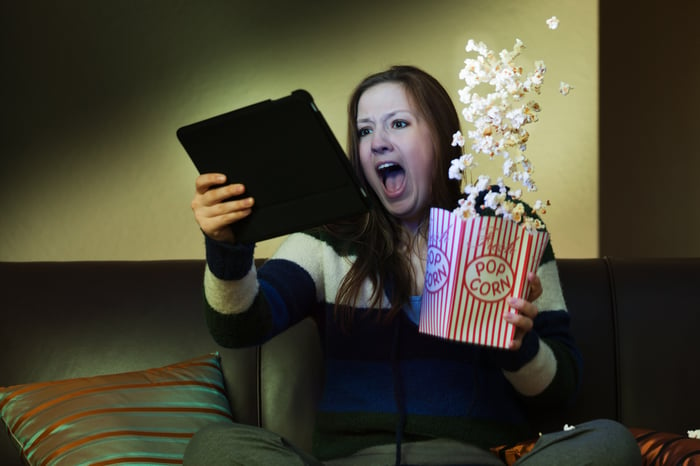 Getting viewers hooked on streaming

Disney and Apple recently launched streaming video services with extremely attractive prices. Disney+'s $7 per month price tag (or $70 per year for annual subscribers) led 10 million customers to sign up for the service on or before the day it launched in November. Apple TV+ comes bundled for a year with any new Apple device purchase, and it'll cost just $5 per month after that. Comcast is planning to offer an ad-supported version of Peacock, its streaming service launching in the spring, for free to its existing customers.

These prices are artificially low in an effort to attract consumers to the service. Ultimately, these companies want to convince consumers that their services are indispensable even if they raise prices.

Both AT&T and Comcast plan to offer ad-supported versions of their streaming services. That said, Hulu's advertising fits well with the majority of its content (next-day television episodes with natural ad breaks). It's not clear the same will work for the newcomers. All the same, ad-supported versions of streaming services allow companies to offer a lower entry price for consumers to try the service and see what's available.

Netflix has had a lot of success over the last half-decade raising its prices. After attracting millions of subscribers at $8 per month, it raised the price on its most popular plan by over 60% since 2014. It also added about 26 million new subscribers in the U.S. during that time.

In other words, consumers' willingness to pay increases as they experience the value of a streaming service. Considering we're on the precipice of a major change in the streaming video landscape, it's very likely consumers are underestimating how much they'll spend on streaming.

Hiding the real price of streaming

Many companies in the premium streaming video space are planning ways to obfuscate the price of their services. Apple is bundling Apple TV+ with new device purchases, and it's reportedly working on a bundle with its other subscription services. While CEO Tim Cook might've called the streaming service a "gift" to Apple customers, the price consumers are paying is tied into the price of their device purchase.

Likewise, Comcast is bundling Peacock with its cable and internet services. AT&T is bundling HBO Max with its pay-TV and wireless phone services. Disney is bundling Disney+ with Verizon's wireless service. Even Netflix is part of several bundles. Even if they offer a discount, these bundles often hide the actual cost of the streaming service.

Bundling will push consumers to spend more on streaming and increase the likelihood they'll remain subscribed month after month. But these bundles may not last forever. And when faced with the true price of the streaming services they've been enjoying, consumers will have to make a tough decision.