Please ensure Javascript is enabled for purposes of website accessibility
Log In Help Join The Motley Fool
Free Article Join Over 1 Million Premium Members And Get More In-Depth Stock Guidance and Research
By Adam Levy - May 17, 2019 at 6:21PM

Netflix is already nearing its long-term goal in the U.S.

Netflix (NFLX 1.98%) has held a long-term goal of reaching between 60 million and 90 million U.S. subscribers. It reached the bottom end of that range in the first quarter.

In order to get to the top end of that range, Netflix will need to reach consumers that are still tied to the pay-TV ecosystem and legacy media while reducing the percentage of customers that cancel their subscriptions as other options become available. The company's best tool to do that is its partnerships with pay-TV distributors and wireless providers like Comcast (CMCSA 0.07%) and T-Mobile (TMUS 1.03%).

Here's how Netflix's partnerships, both in the U.S. and internationally, will propel its continued growth. 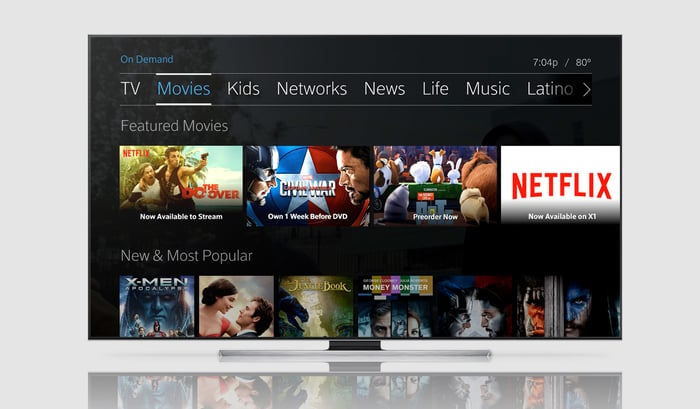 6.4 million net additions thanks to partners

Bundling Netflix with cable, home internet, or wireless subscriptions may have resulted in 6.4 million additional Netflix subscribers over the last two years, according to analysts at Barclays. The rough estimates show 22% of Netflix's net additions in the U.S. came as a result of increased sign-ups and lower churn rates among customers subscribing to Netflix through a partner. That number is 9% for its international effort, which is growing much faster organically.

Netflix's U.S. partnerships are adding about 1.2 million domestic subscribers per year by Barclays' estimate. At that pace, it'll be a long time before Comcast or T-Mobile propels Netflix to 90 million U.S. subscribers.

But there are reasons to think partnerships will start producing even better results for Netflix.

First of all, Netflix hitched its wagon to the fastest (nay, only) growing wireless carrier in the U.S. in T-Mobile. The company consistently adds more than 1 million postpaid subscribers every quarter. Customers taking two or more phone lines on its unlimited data plan are eligible to receive a free Netflix subscription. Not only is T-Mobile adding new subscribers, it's also working to move subscribers on its legacy plans to its unlimited plans.

Beyond its deals with T-Mobile and Comcast, Netflix has an opportunity to make more bundling deals with pay-TV distributors. "We'll see more and more of those [partnerships], and I think it's a nice supplemental channel that accelerates our growth," Chief Product Officer Greg Peters told analysts on Netflix's first-quarter earnings call.

Netflix's partnership with Comcast allows Comcast to sell Netflix as part of its cable packages. While Comcast's customer base is sizable, it represents just 25% of all pay-TV subscribers in the U.S. That leaves a lot of opportunities out there for Netflix to pursue.

Deals like Comcast's may become more and more appealing as pay-TV distributors look for ways to package a skinny bundle to appeal to subscribers. As the television media industry undergoes some consolidation, putting together a smaller bundle becomes increasingly difficult. Adding Netflix as an option for subscribers could make it easier for distributors to keep customers subscribed to TV.

Another reason partnership subscribers will be an important source of subscriber growth is because viewers subscribed through partners are less likely to cancel their subscriptions. That means the net additions from partners will show faster growth compared to those coming through traditional channels for Netflix, since it won't have to offset as many subscriber losses.

If a customer subscribes to Netflix as part of a bundle of channels from Comcast, they're not going to cancel that subscription unless they end their cable subscription. That's a lot harder to do than just clicking a button on the Netflix app to stop billing.

Likewise, if a customer gets Netflix bundled with their T-Mobile subscription, they're not likely to cancel very quickly. T-Mobile's postpaid phone churn fell to just 0.88% in the first quarter, a new record for the wireless carrier.

While Netflix doesn't report its churn rate anymore, Barclays' analysts believe churn from partners is considerably lower than its organic churn rate. Combined with additional partnerships with distributors, it will make Netflix's bundling deals a significant source for its continued growth on its path to 90 million domestic subscribers.