Under Armour (NYSE:UAA)(NYSE:UA) shareholders may be either extremely satisfied or sorely disappointed, depending on when they invested. If they invested when shares first came public in 2005, they're up well over 500% and handily beating the market. But if they invested in September 2015, they picked the worst possible time to buy. 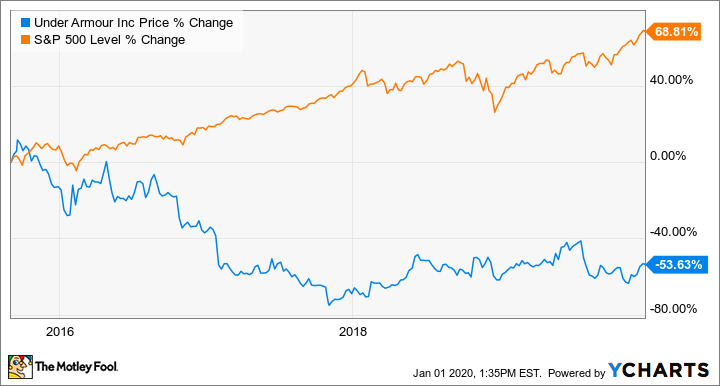 Under Armour is an underdog in athletic apparel compared to the current alpha dog of the space, Nike, which has a market capitalization of $158 billion and over $40 billion in trailing-12-month (TTM) revenue. Under Armour's market cap is under $10 billion with roughly $5 billion in TTM revenue. This picture paints an opportunity for Under Armour. Growing into a company even half the size of Nike would provide today's investor outsize returns.

But investors need to look past simple market cap and revenue comparisons. Under Armour's stock currently trades at almost 90 times trailing earnings. Nike trades at only 35 times earnings for perspective. Now, Under Armour's high valuation could be warranted if the underlying business was performing well. One year ago, the company released its 2023 strategic growth plan. Before buying Under Armour's stock, investors should measure the company's progress toward its stated goals, and whether reaching those goals support the stock's sky-high valuation.

The plan is broken into two priorities, and the first is to "protect" the Under Armour brand. The company rose to prominence on the back of its moisture-wicking technology -- an innovative product at the time. At this stage in the company's life, protecting its brand means innovating new products to meet what users want from athletic apparel. 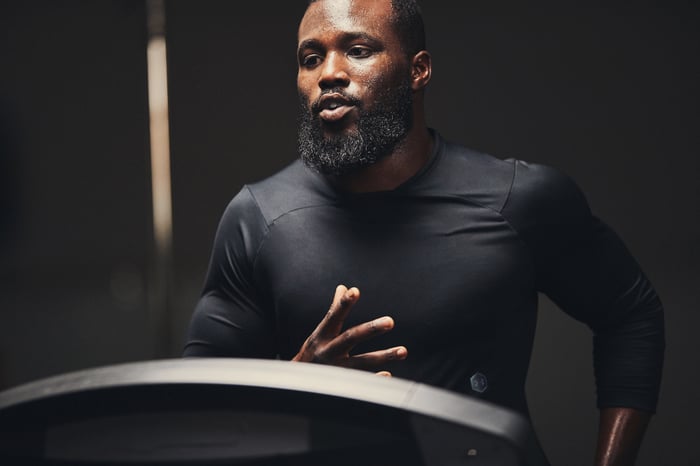 In April 2019, Under Armour brought one such innovation to market: UA Rush, which weaves minerals into the fabric, which the company says has an infrared effect. The claim is that as heat is reflected back into the body, blood flow and oxygen circulation improve, thus increasing the wearer's strength and endurance.

Another newer product (introduced in 2018) is Under Armour's HOVR line of connected running shoes. These chip-equipped sneakers track your running performance and integrate with the company's popular MapMyRun app. Management is clearly pleased with how these shoes are selling (they've mentioned them in every earnings call since release), but they are less innovative than UA Rush. Both Nike and adidas have products similar to HOVR. To be sure, it is important to keep up with industry trends, but I wouldn't consider HOVR sneakers as accomplishing the company's innovation priority the same way as UA Rush does.

Under Armour needs more true innovations. One analyst asked about future innovations on the third-quarter 2019 earnings call. Management responded that it was "really excited" about its "innovation pipeline" but was light on details. Until those details are clearer, investors should withhold their excitement.

The strategic plan's second priority is to "perform," and Under Armour's management laid out six financial targets it will gauge its performance by. All are important, but its goals for revenue growth, earnings per share (EPS) growth, and annual operating cash flow are the easiest to understand and most indicative of whether progress is being made toward the other three goals.

In 2019 Under Armour hoped to grow revenue in the low- to mid-single digits. It will report on the year in mid-February. Then from 2020 to 2023, it hopes to grow at a mid- to high-single-digit compound annual growth rate (CAGR), and a low double-digit CAGR after that. The EPS CAGR goal is more aggressive at 40% leading up to 2023. And finally, the company is aiming for annual operating cash flow to be $700 million by 2023.

Since three quarters of fiscal 2019 have already been reported, we can judge this plan against the company's performance up to this point. For the first three quarters of 2019, Under Armour's revenue was up less than 1% compared to 2018's results for the same period, and operating cash flow was down 14%. The company did earn $0.24 per share, and it deserves credit for that EPS turnaround, but underperforming revenue and operating cash flow targets so far puts the plan's future in question. To be fair, investors can expect operating cash flow to improve in the upcoming fourth quarter, as it typically spikes at the end of the year. But Under Armour's revenue typically peaks in the third quarter. 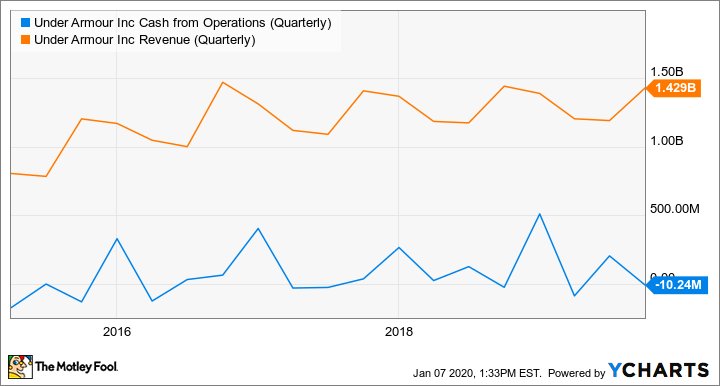 This means that the company underwhelmed in the first year of this five-year plan. And it only gets harder from here. It doesn't seem reasonable to expect the company to grow revenue at least mid-single digits in 2020, when it likely didn't even muster 1% in 2019.

Is Under Armour a buy?

In light of performance compared to plan so far, I don't believe Under Armour is a buy. In fact, this is what inspired me to sell my shares recently. I love the brand's innovations, and will likely continue using its products. And it could be worth revisiting once Under Armour is meeting or beating its own expectations as double-digit revenue growth and 40% EPS CAGR might support a high valuation. But right now, Under Armour isn't getting it done, and I believe there are plenty of other better growth stocks out there.

For example, in the second quarter of Nike's fiscal 2020, it reported adjusted revenue growth of 13% and EPS growth of 35%. That revenue growth is what Under Armour is forecasting four years from now, and the EPS growth is more significant since it's a much more profitable company. Not only is it outgrowing Under Armour, but it trades at 29 times forward earnings estimates compared to 45 times estimates for Under Armour. Additionally, Nike stock pays a modest 1% dividend yield, which Under Armour does not.