Memory chip giant Micron Technology (NASDAQ:MU) started Tuesday's trading session with a 6% gain, based on an upgrade from analyst firm Cowen. The stock got a second wind when Chief Business Officer Sumit Sadana took the stage at the 2020 CES show to share some rosy updates on the memory market as a whole. All told, Micron's shares closed 9% higher on Tuesday.

Let's have a closer look at Sadana's market forecast.

How to optimize the supply-and-demand equation

According to the Micron executive, both DRAM and NAND memory markets are "in a better place" this year due to a more favorable supply-and-demand balance.

Lower capital expense investments across the memory industry are putting a damper on the growth in production volumes, and that trend is starting to have a real effect on memory prices. Micron's own capital expenses clocked in at $1.9 billion in the recently reported first quarter of fiscal year 2020, 28% below the $2.7 billion CapEx investment Micron made in the year-ago period. The trend line looks like this over the last two years: 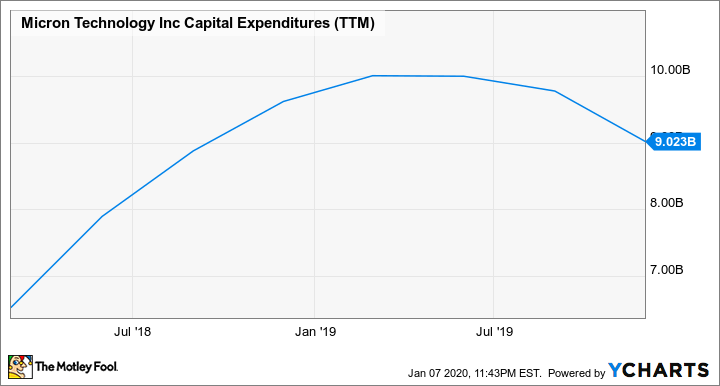 Sadana described the demand from mobile devices as "robust." This market is currently driven by much larger memory capacities in 5G-capable smartphones, both on the short-term DRAM side and in the long-term NAND storage compartment. Similar trends are playing out in the auto industry, where wireless connectivity meets self-driving functions and better infotainment systems to create a strong upswing in the onboard memory content.

Memory chip demand is solid and rising, while Micron and its supply side peers are tapping the brakes on production line upgrades. And then there's the shifting market share in SSD devices, where profit margins also tend to run higher. Some of this is old news, or simply confirmation of third-party estimates, but it's always good to see confirmation of this data from a highly ranked Micron insider.

All of this adds up to a solid bounce for memory chip makers in general, and for Micron in particular. And you don't have to take Sadana's word for this analysis since his insider view of the market largely matches up with the reasons behind Cowen's Micron upgrade as well as optimistic executive comments made in last month's earnings report.

Micron's shares have now gained 71% in 52 weeks, but the stock still looks ridiculously cheap as it trades for 11 times forward earnings. If there's a financial rebound in the cards, as Sumit Sadana suggests, this stock should have room to post even stronger gains in 2020.