Please ensure Javascript is enabled for purposes of website accessibility
Log In Help Join The Motley Fool
Free Article Join Over 1 Million Premium Members And Get More In-Depth Stock Guidance and Research
By Rich Duprey - Jan 8, 2020 at 6:46AM

These publicly traded companies make it insanely easy to cut the cord on cable and satellite programming.

If 2020 is the year you've decided to cut the cord because there are just so many streaming video options now available, you still need a way to get the content streamed into your television. Do you want a dedicated dongle that attaches to your TV; a set-top box that, well, sits on top of your TV set, or maybe a smart TV that has the streaming technology built right into it?

There are almost as many ways to get streaming content into your home as there are streaming services. And while streaming software and hardware represents only a small fraction of most of these businesses' operations, the companies behind these products could make fruitful fodder for your own investing research.

With so many choices, the five stocks below represent the strongest contenders in streaming-media hardware today. 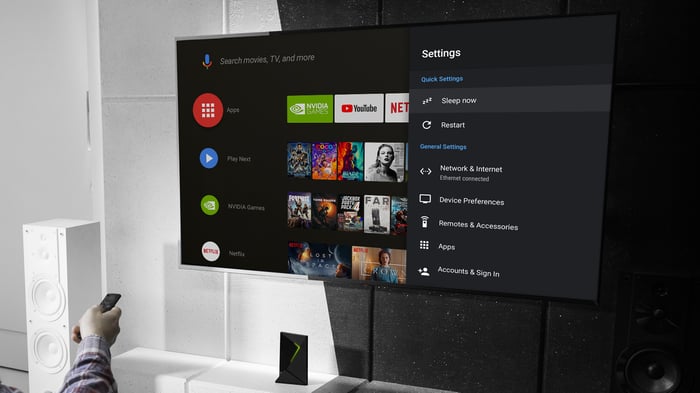 Most of the companies offer multiple devices to watch content on your TV. Amazon.com (AMZN -3.21%) is no slouch when it comes to giving you options based upon your personal preference.

Its Fire TV Stick, which resembles a thumb drive and comes with or without Alexa voice control, is one of the most widespread devices on the market today. There is also the Fire TV Cube, a small black box that lets you watch movies and TV shows, and allows hands-free control over a wide range of smart-home devices, including your Ring doorbell.

Amazon Fire TV is also built into smart sets made by Toshiba and Best Buy's house brand Insignia, and has been introduced into soundbars from manufacturers such as Grundig, JVC, and Onida. Amazon also just announced it is partnering with BMW and Fiat Chrysler to offer Alexa capabilities in cars.

Similarly, Roku (ROKU -13.74%) is just as broad-based in its coverage, and though the gap between it and Amazon has been narrowing, Roku remains the leader in media player devices, with a 39% market share as of July 2019, compared with 30% for Amazon.

Roku's interface is arguably the best in the industry. It offers the most apps for streaming content, the easiest-to-use interface, and (perhaps most important) a platform that is agnostic -- it doesn't push any one content provider over another, and all are welcome.

Like Amazon, Roku offers a dongle, the Roku Stick Plus, as well as devices with small form factors, such as its Express and SE (which is essentially the Express, but made for Walmart). And the Premiere allows you to turn older "dumb" TVs into smart ones.

The company really excels in smart TVs. Its software as a service is far and away the leader with one out of every three smart TVs sold being a Roku set with its platform built in. It just announced it has added 15 more manufacturers of smart-TV sets as brand partners.

Because Roku and Amazon suck all the oxygen out of the room when it comes to media players, it's easy to forget that Apple (AAPL -1.92%), with its Apple TV, is the third largest player in the space, albeit far behind the other two with about a 16% market share as of last June.

That's likely because it has chosen to target the high end of the market, as would be expected of an Apple device. Apple TV 4K, for example, costs about $100 more than either a Roku or Amazon stick.

At one time, its advantages over the competition made it worth considering even if you weren't normally part of the Apple ecosystem. It supports Dolby Vision and HDR (or high-dynamic range imaging), which gives you a better picture. But now Roku and Amazon devices also support such capabilities. Still, the sleek interface and excellent voice controls make Apple TV one to consider.

Right behind Apple is Alphabet's (GOOG -5.14%)(GOOGL -4.95%) Google Chromecast. At one time, it was also a serious contender for market share leadership, but has since slipped in the standings, with the gains by Roku and Amazon having come directly at the expense of Google and Apple.

The Chromecast is one of the cheapest ways to get streaming video content, and if you are in deep in the Android milieu and using Google Assistant in your home, this media player may be right for you. It's very streamlined, making it very portable, though some may find the lack of a remote to be limiting and will be put off by no on-screen menus.

NVIDIA (NVDA -4.40%) is not a company often thought of when it comes to streaming, but the NVIDIA Shield has found a home with many cord-cutters because of its functionality beyond just viewing content.

For example, gamers truly appreciate its capabilities, as it comes with a fairly extensive portfolio of titles built in. It can handle a number of other jobs as well. It's a network-attached storage device (useful, for example, for downloading video and audio content), and can be a Plex media server, which lets you take your downloaded content with you on the road. Its compatibility with Silicon Dust's HDHomeRun devices provides access to free over-the-air content, letting you view it on your phone or tablet, too.

It's a pricier option at around $150, but its capabilities for gamers and others who want to amass a lot of content make it worth the money.

It's never been easier to cut the cord on expensive cable and satellite programming that you likely hardly ever use. And just as the content providers are allowing users to get skinnier and skinnier packages (albeit at costs that are beginning to approach cable TV pricing), the media player manufacturers are making the decision a no-brainer.