At a retail level, the alcohol business is highly fragmented. There are 34,000 different liquor stores operating in the United States alone, and the top 50 companies involved make less than a quarter of the sales.

Walmart (NYSE:WMT),  the world's biggest retailer, has long sold most mid-tier alcohol brands. So, from an investor standpoint, the news last week that the company is boosting the number of premium alcohol brands it stocks isn't game-changing -- it just won't move the financial needle for the company all that much.

However, the announcement is interesting all the same. It reflects two different (but connected) retailing trends that Walmart can continue to capitalize on. One is that consumers increasingly don't care who provides a product or service as long as they like the product or service. The other? Convenience is everything.

There was a time not terribly long ago when shoppers thought -- and behaved -- along clearly defined lines. Walmart was where you went to find bargains on basics, usually items that came packaged in a box. You went to Macy's at the mall to purchase new apparel. If it ended up in your refrigerator, it came from Kroger, Safeway, or some other supermarket chain. And for premium alcohol, one would likely go to a liquor store -- bearing in mind that the shops of wine, spirits, and beer retailers used to offer more charm than the warehouses so common today do. 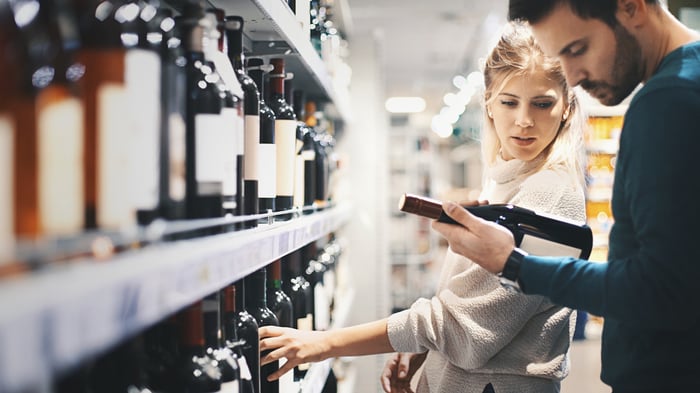 None of these walls still stand though. Amazon (NASDAQ:AMZN) is now the nation's biggest clothing retailer, and Walmart is the United States' largest grocer.

Elsewhere in the consumer-services landscape, cable and internet company Comcast now also provides wireless phone service to 1.8 million customers. And it's not just the monster-sized companies making lateral moves into new businesses: More than half of all Americans purchase at least one true meal a month at a gas station.

This decompartmentalization is a trend few saw coming a couple of decades ago.

Walmart VP of adult beverages Jason Fremstad wasn't kidding when he told Business Insider that his company is "really not known for" the local craft beer, fine wines, and premium spirits that it's bringing to its shelves. But increasingly, the stigmas that once prevented companies from branching outward or upward are being shrugged off by consumers.

Consider, for instance, the ongoing success of second-chance apparel retailers like TJX Companies' (NYSE: TJX) TJMaxx. It thrived in the throes of the 2007-2008 subprime meltdown and the subsequent recession. But despite the U.S. economy's solid growth since 2011, the more-upscale department store Macy's is still struggling, while TJX Companies same-store sales improved to the tune of 4% for the quarter ending in October, extending a long-standing streak of sales growth.

We're also seeing a value-minded shift among the selections on grocery store shelves. Gone are the days where national brands dominated shopping carts. Private-label and store-brand goods are not only en vogue now, but Nielsen said in August their growth was on pace to exceed the growth of third-party consumer packaged goods in 2019, as it did in 2018.

Underscoring this seismic shift is a growing demand for premium private-label goods. Consumers -- particularly millennials -- know they're store brands. They just don't care. Consumer behavior research company Daymon reported late last year that 85% of shoppers trust store brands just as much as national brands, and are even willing to pay something of a premium for the right private-label products.

That's not to suggest Walmart's new interest in premium alcohol will inevitably lead to it offering private-label spirits or wine. It does make clear, however, that shoppers just want good products at the right prices, regardless of which retailer is selling them.

Grocery shopping was once a weekly chore, involving a trip through a store's aisles for at least one member of every household. Not anymore. Walmart and Kroger have both demonstrated success with their curbside pickup services, while Amazon has made life more convenient by delivering consumer staples in some markets from its warehouses. Some trusting consumers are even willing to let grocery delivery people enter their homes and put perishables into their refrigerators.

The push beyond the old cultural norms has carried well beyond just how groceries are procured though. Consumers are employing other ways to save time. One only has to look at the success of Dollar General (NYSE:DG) to see how.

It has been often criticized for capitalizing on the lack of shopping options available in lower-income neighborhoods, and also is accused of preventing more traditional grocers from opening stores near their locations. The data doesn't entirely jibe with those complaints, however. Alternative data provider Thinknum points out there are somewhat more dollar stores in the nation's middle-income ZIP codes than there are in lower-income ZIP codes; Dollar General aims to continue its expansion at a pace of 1,000 stores per year.

People are increasingly taking advantage of the easy access those nearby stores provide. As Telsey Advisory Group analyst Joe Feldman said in a Fortune article last year, "The dollar stores have become a lot more acceptable to all income demographics."

Again, Walmart's enhanced interest in high-end booze doesn't make its stock remarkably more buy-worthy than it was just a few days prior. It's also not to suggest that all of its ventures outside its core competencies will pan out; CEO Doug McMillon's plan to turn stores into cloud-computing centers still looks like more of an expensive distraction than a viable business idea.

However, to the extent that its foray into the premium alcohol business reflects Walmart's understanding of the state of modern retailing -- where certain products drive foot traffic and improve consumers' perceptions -- it's actually a rather encouraging move.