Shares of artificial intelligence (AI) company Cerence (NASDAQ:CRNC) surged 45.4% in December, according to data provided by S&P Global Market Intelligence. It was a significant improvement in the stock price following a disappointing start as a publicly listed company. The move largely came down to a positive set of fourth-quarter results and outlook given in the middle of December. 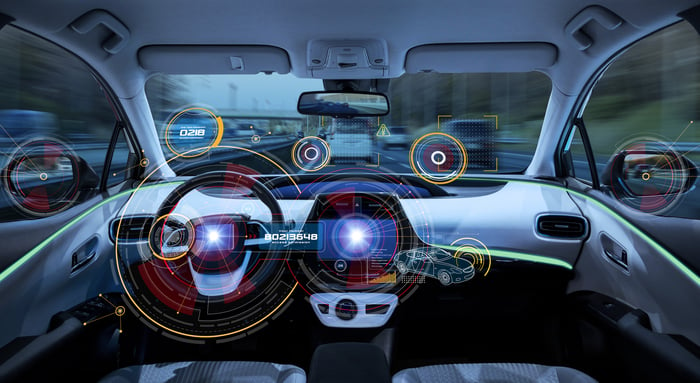 Cerence, which was was spun off of Nuance Communications (NASDAQ:NUAN) at the start of October, focuses on AI solutions for the automotive market, such as voice, eye tracking, and even gesture recognition. Customers include automakers Audi, BMW, Daimler, Ford, GM, and Toyota.

It's an exciting growth story, and Cerence currently has a dominant market position. But as a newly listed company with mid-single-digit operating margins, it's likely to face competition from technology giants such as Google, Amazon.com, and Apple.

In a conference call in September, CFO Mark Gallenberger claimed 80% market share, while "win rates right now are running about 90%, and that's been consistent." Even with niche players and some of the larger tech companies trying to enter this market, Gallenberger said, "our win rate has still been very high."

Given the level of uncertainty around the stock, the market was significantly reassured by the fourth-quarter results and sent the stock rocketing higher. Management expects revenue to jump to a range of $321 million to $336 million, up from $303 million in 2019, representing growth of 6% to 11%.

The design wins in the fourth quarter and affirmation of guidance is definitely a positive result in an environment where many other automotive-focused companies have disappointed with guidance on the back of weak light-vehicle sales and production figures.

In addition, the lack of trading history as a stand-alone company is always likely to create some uncertainty over the stock, and the results served to fill in some of the blanks.

Cerence closed its fiscal year with a record backlog, and management expects 50% of convert into revenue over the next three years. This would mean $260 million in revenue from the existing backlog in 2020, $235 million in 2021, and $195 million in 2022.

But instead of revenue projections, investors should focus on what will drive growth in the future: continued design wins and revenue from cloud-based services that allow a car to operate as a kind of rolling smartphone.

Management expects the percentage of cars with AI products to increase from 59% in 2018 to 85% in 2023, and those with connected services to increase from 12% in 2018 to 50% in 2023. If the projections prove correct and Cerence maintains its leading position, then the company could have a very bright future.