J.C. Penney (OTC:JCPN.Q) is struggling to deal with the challenges of the retail apocalypse. Its stock is down an incredible 90% from its five-year market peak in 2016. Its new CEO, Jill Soltau, who took the helm in Oct. 2018, is vowing to restore J.C. Penney to its former glory. It needs to first work to ensure its survivability before it can even think about returning to its previous competitive position.

The retail apparel industry is not expected to get easier in the next decade, especially for a traditional department store. It's likely going to get more intense as an increased percentage of shopping moves online, an arena Amazon dominates, and leaves a smaller pie for brick-and-mortar retailers to divvy up. Let's look at J.C. Penney's chances of surviving the decade. 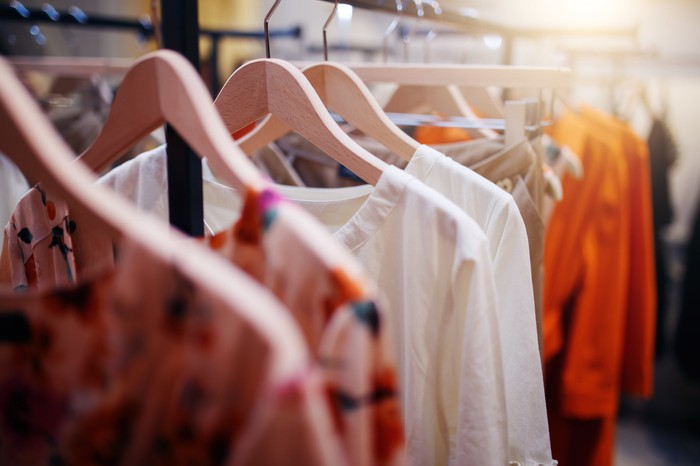 The balance sheet is vulnerable

J.C. Penney's cash and equivalents position stands at $157 million, which is dangerously low. The company is on the hook for over $4 billion in debt, which is considerably large by any measure but exceptionally large when you compare it to the company's current financial position. What makes matters worse is that it also has over $2 billion in accounts payable, which means a big chunk of the cash that comes in from holiday sales will go toward paying those liabilities instead of paying down the company's debt burden. The holidays make up the biggest selling season for retailers, and J.C. Penney is no different. In its next earnings release, its balance sheet should look better as it converts a significant amount of inventory into cash.

The department store chain also owns billions of dollars worth of real estate that it can turn into cash. In some cases, it sells the property to raise money, and in other cases, it uses the property as collateral to borrow against. Its ability to harvest value out of its real estate, similar to what Macy's is doing, is vitally important to its survival as its creditors may stop lending to it if the situation gets dire.

Is there an end in sight for declining sales?

Sales declined 9.3% last quarter, and comparable-sales were down 8% in the first three quarters of fiscal 2019. On the bottom line, net income has been negative for years. With its balance sheet up against the wall and limited levers to pull to increase sales, there doesn't seem to be an end in sight to the declining results. J.C. Penney's hope lies in its plan for renewal, and if that works, it can build on that success to ensure survival.

Consumers are increasingly making purchases online, and because of that trend, a retailer must be able to offer shipping terms at least on par with its peers. Yet to qualify for free shipping with J.C. Penney, online customers must spend a whopping $99. Otherwise, shoppers must pay $8.95 for regular shipping. By comparison, Macy's offers free shipping on orders over $25, and Nordstrom offers free shipping on any order, no minimum required. J.C. Penney does provide shoppers the option to buy online and pick up in-store the same day, which is on par with its peers. To increase e-commerce sales, J.C. Penney will need to make its fulfillment options more appealing.

In its need to conserve cash, one of the areas of reduced spending is in advertising. While saving money on that front may result in higher profits, the unfavorable side effects become apparent in subsequent quarters when sales and traffic trend lower as a result. What investors would rather see is efficient marketing, which is a more sustainable path to profitability and growth.

In J.C. Penney's third-quarter conference call, management unveiled its five-part plan for renewal. The strategy includes its intention to drive traffic, offer compelling merchandise, provide an engaging experience, fuel growth, and build a results-minded culture. While it sounds lovely, it is yet to be proven, and it might be too little too late for the retailer. The good news about this plan is that it will not require a significant capital investment to complete.

J.C. Penney has a slim probability of surviving the decade

Between now and 2030, J.C. Penney has over $3 billion in debt coming due, with roughly $2.5 billion scheduled between 2022 and 2023. It's not generating nearly enough free cash flow to pay down its debt from operations, but an improvement in this area will make lenders more inclined to extend it time and credit.

There are also unknown roadblocks that could hamper J.C. Penney's recovery efforts in the next decade: a recession in the U.S. economy, lenders refusing to extend the company credit, failure of its plans to fuel growth, and an inability to sell enough real estate to fund operations and pay back debt, to name a few. The path to survival is a narrow one, where the sales decline turns around and grows for an extended period without facing any negative shocks.

Investors looking to buy J.C. Penney in the hopes of a possible turnaround are best served waiting for proof that the various strategies have taken root and its cash and liquidity position are less reliant on creditors. Otherwise, the reward is not enough to accept the high-level risk of this stock.