Fannie Mae (OTC:FNMA) in late December put out its economic forecast for 2020, and it's much more gung-ho about the current state of the economy and the housing sector in general. The revised forecast is good news for mortgage originators and homebuilders.

Housing has been the missing piece of the puzzle for the U.S. economy since the housing bubble burst over a decade ago during the Great Recession. Housing construction has historically been the first sector to recover after a recession, but this time around it ended up being the last. Much of that was due to excesses built up during the bubble years. Those excesses have long been worked off. Seeing that, Fannie Mae has raised its activity forecasts for 2020.

Let's take a closer look at what companies could benefit from this upgraded forecast. 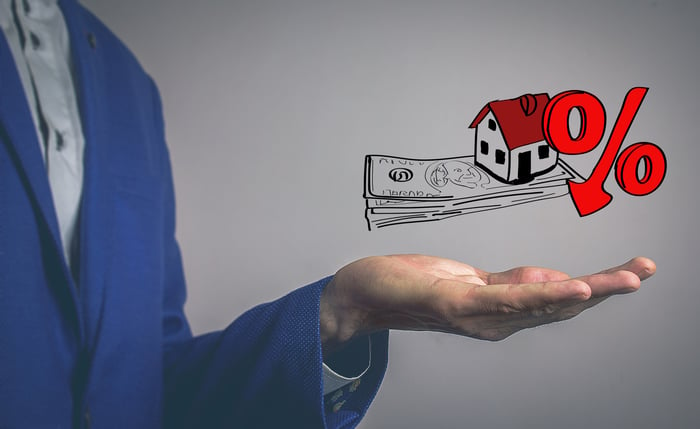 "Housing appears poised to take a leading role in real GDP growth over the forecast horizon for the first time in years, further bolstering our modest-but-solid growth forecasts through 2021," explained Fannie Mae's Chief Economist Doug Duncan. Stronger consumer spending and a tight labor market will boost the sector, along with a relatively benign monetary policy.

Fannie Mae raised its forecast for overall mortgage origination to just over $2 trillion in 2020. This is good news for mortgage originators like PennyMac Financial Services (NYSE:PFSI) and Two Harbors (NYSE:TWO) as well as banks with strong mortgage origination businesses like Flagstar (NYSE:FBC) and Wells Fargo (NYSE:WFC). The past year was the highest for mortgage volume since 2007, driven by lower rates and continued growth in new home sales. It looks like 2020 could be almost as good. This is bolstered by the fact that some home builders are not seeing the normal seasonal decline in home sales traffic. It is still conventional wisdom in the investment community that 2020 will return to the post-bubble normal we have become accustomed to-limited purchase activity. The early indications are that this year will resemble 2019 more than, say, 2016. Note that consolidation will be a theme in the origination sector as well. Flagstar bought Stearns lending a couple of years ago, and PennyMac could make a juicy target. PFSI rose 63% last year but is still trading at a reasonable valuation.

Mortgage originators perform best when interest rates are stable or falling. The market is currently forecasting further rate cuts, which lines up with Fannie Mae's forecast as well. In the past decade, the origination business had been driven largely by refinancing activity which was a function of falling rates. But home purchase activity lagged. In 2020, it appears we will have both engines finally working together. Lower rates will permit continued refinancing activity, while increased homebuilding and demographics will drive more buying activity for the first-time homebuyer.

How are mortgage originators taking advantage?

PennyMac Financial Services is a mortgage originator closely aligned with PennyMac Investment Trust (NYSE:PMT). The financial services company is one of the largest non-bank mortgage originators in the U.S. Its business model is to purchase completed mortgages from smaller independent bankers and then resell them either to the investment trust or to package them into mortgage-backed securities which are then sold to investors in the market. In the process, the company takes a small cut (creating its profit margin).

Two Harbors is somewhat different in that it originates and invest in loans that are generally not guaranteed by the government. Typically these are loans greater than Federal Housing Finance Agency (FHFA) limits of $510,400 (for most parts of the country). These loans are typically quite safe, with strong credit characteristics. Two Harbors will issue mortgage-backed securities against these loans (similar to buying stocks on margin). By borrowing money to buy stock, the returns are magnified. Both Two Harbors and PennyMac use this strategy.

Mortgage origination is largely a volume game -- the more the companies originate, the more profitable they are. PennyMac and Two Harbors will benefit from another strong year in origination. That said, the two stocks are very different animals. PennyMac is more of a typical financial services firm, which trades on its price-to-earnings ratio. PennyMac's forward P/E is 7.4, which is similar to a bank.

As a mortgage real estate investment trust (REIT), Two Harbors trades on its dividend yield, which currently stands at 11%. Two Harbors benefits from increased origination volume and an increased appetite for its mortgage-backed securities. Securitization has long been a staple of the mortgage market, and it pretty much is a shadow of its former self. While there were many excesses during the bubble years that don't need to return, the market has over-corrected these days and many potentially able homebuyers still lack access to credit. As memories of the bubble years fade, investor appetite for these securities should return and Two Harbors is positioned to benefit. Two Harbors' dividend yield will be supported by continued strength in the mortgage origination market, a benign interest rate environment, and a return of the private securitization market.

Many ways to win in the sector

While 2020 is expected to be a strong year for homebuilding, a benign interest rate environment will lift the boats of mortgage originators like PennyMac and Two Harbors as well. While a downturn in manufacturing could be a risk for banks with loans to the sector, the mortgage originators will be less exposed and could benefit if the Federal Reserve cuts rates in response. PennyMac will trade primarily on its earnings, and with a 7.5 P/E an investor is getting value, along with some possible upside if the company gets bought. Two Harbors trades on its dividend yield. For now, Two Harbor's dividend yield looks safe enough. There are many ways to win in this sector.