As the only publicly traded homebuilder that focuses exclusively on the luxury market, Toll Brothers controls two main segments: Traditional home building and City Living. It operates in 22 states and focuses primarily on the move-up, empty-nester, active-adult, and second-home buyers.

In an effort to expand into new segments of the housing market that fit into its wheelhouse, Toll is putting a new focus on reaching out to the first-time homebuyer, particularly through its concept of "affordable luxury." 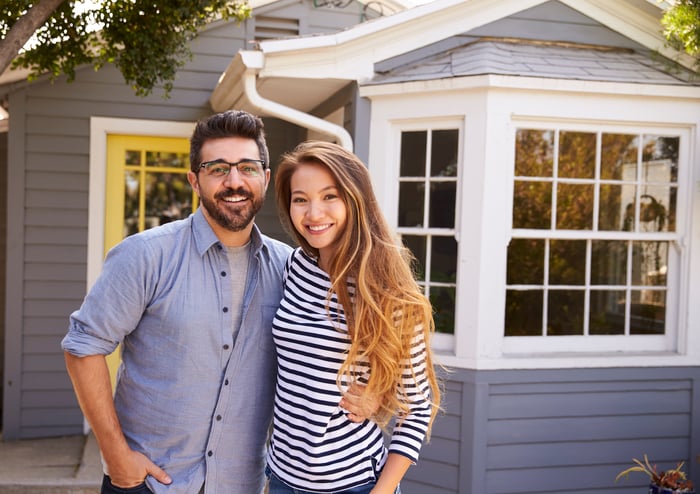 This year has been a good year for the homebuilding sector, and the S&P SPDR Homebuilder ETF has outperformed the overall market. Recent strong earnings from D.R. Horton and Tri Pointe have supported the theory that 2019 is the year when homebuilding went from being a drag on the economy to a source of strength.

The chart below shows new home sales going back to 1963. The excess inventory that was built during the bubble years has been liquidated, and we have a situation where demand exceeds supply. While there is an acute shortage of affordable homes, particularly detached starter homes, there is still a need for move-up and luxury properties as well. For example, there are empty-nesters looking to downsize from large homes into smaller, upscale active adult communities. And older first-time homebuyers, who are more established in their careers are often looking for something more than the typical starter 1,400-square-foot ranch. While it is hard to estimate actual demand by price tier, suffice it to say the demand is up across the board.

Historically, luxury in the housing market has meant McMansions. However, Toll Brothers has broadened its offerings to include luxury apartment buildings, and its newest effort: affordable luxury. The affordable luxury niche (Toll won't refer to it as a "segment") is geared toward the millennial buyer, who is buying later in life and often has more financial resources than the typical first-time homebuyer. Currently, 37% of Toll's offerings now have price points below $500,000, and in some areas hit $375,000. Note, however, that these are base prices, and when customization and additional amenities push the prices higher. Still, affordable luxury properties fall well below Toll's average selling price in the fourth quarter of $857,800. The increased density (meaning smaller units/properties built close to each other) of these projects will help Toll maintain margins despite the lower price points.

"While affordable luxury crosses all buyer segments including move-up and active-adult, this initiative is driven in large part by a growing number of millennials who are older, more affluent, and more discerning when they buy their first home. Think of it as a BMW 3 Series, a great example of affordable luxury."

Toll's outlook was surprisingly upbeat, especially compared to this time last year. Some of the markets that had been topping out then (California and the New York City area) are beginning their upward trajectory again. The most interesting factoid was that the demand for new homes and the growth in orders in the first six weeks of Toll's first quarter (November to early December) was stronger than the fourth quarter. This is remarkable given that the real estate sector is highly seasonal, and the November through January time period is typically weak. As a general rule, home building and home sales cycles peak in the spring and summer as families generally prefer to move in the summer when school is out. An acceleration in traffic during the dead part of the year is encouraging for 2020.

The luxury housing market struggled in 2018 and 2019 as interest rate hikes and tax reform put extra pressure on the luxury home affordability. Falling interest rates and a focus on lower price points have positioned the company for growth and will help Toll Brothers drive earnings going forward.