Aimmune Therapeutics' (NASDAQ:AIMT) share price has gained 11% over the past month as the company waits for the Food and Drug Administration to issue an approval decision on its very first drug, one that represents the theme of its three-drug pipeline: treatments to address food allergies.

The decision on Palforzia, an immunotherapy for peanut allergy in children and teens, is expected by late January. Investors are feeling optimistic because an FDA advisory committee offered a favorable opinion on the drug in September. While the FDA doesn't have to follow the committee's move, it does take the opinion into consideration. 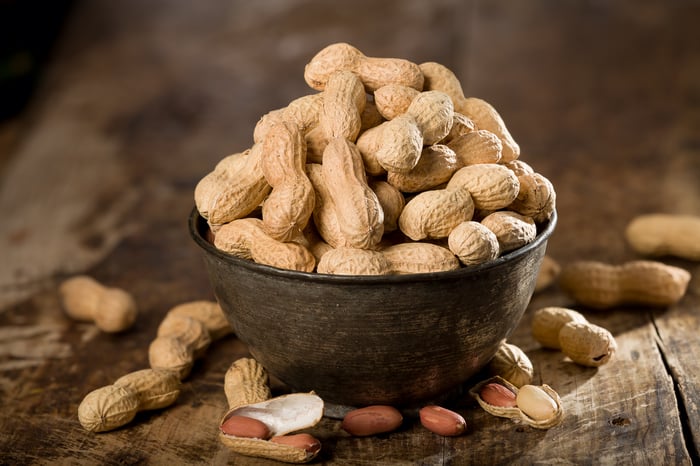 The verdict is crucial for Aimmune because it concerns the company's first drug and may influence investors' view of the rest of Aimmune's pipeline. What makes the decision even more crucial for the company and for patients is that the drug serves an unmet need -- and one that leads to severe reactions, even death.

Including Palforzia, Aimmune has three products in the pipeline. AR201 to treat egg allergies is in phase 1/2 studies, while an investigational product for tree nut allergies is at the preclinical stage. Since the drug candidates are based on foods that don't present toxicology issues, the company isn't obliged to conduct phase 1 trials. That factor could shorten the to-market timeline for Aimmune's treatments, a plus considering the average timeline of at least a decade to take a drug from discovery to the pharmacy shelf.

Since Aimmune's pipeline revolves around one particular theme, an FDA approval would validate the company's research and approach in the eyes of investors. This is key to further stock market gains because, for investors, the value of a biotech company is in its products. Products are the drivers of future profit as well as the asset that could attract an acquisition or licensing agreement.

Here's a closer look at Palforzia: The treatment, taken daily as a powder that can be mixed with unheated food, contains doses of a peanut protein in order to desensitize patients to the allergen. Currently, some allergy specialists offer patients desensitizing therapy, but all such methods and products lack regulatory approval. Palforzia would change the landscape, as it would be the first treatment of this kind accepted by the FDA, therefore easily and broadly prescribed by doctors. The standard treatment for peanut allergies these days is a shot of epinephrine following accidental exposure.

DBV is nipping at its heels

Aimmune isn't alone on the childhood allergy playing field. DBV Technologies (NASDAQ:DBVT) is close behind, with an FDA decision on its peanut allergy drug expected in August. DBV's treatment is a daily patch that delivers peanut antigen to "activate the immune system," according to a press release. Other companies are working on earlier-stage products, and even big pharma-biotech pair Sanofi (NASDAQ:SNY) and Regeneron (NASDAQ:REGN) are testing the already marketed drug Dupixent in a clinical trial for the peanut allergy indication (and combining it with Palforzia in another trial in cooperation with Aimmune). In spite of the competition, GlobalData sees Palforzia taking leadership, predicting that the drug could seize 67% of the market by 2027 for a share worth about $3 billion.

According to a 2018 study in the journal Pediatrics, peanut allergy is the most prevalent food allergy among children in the U.S., affecting about 1.6 million children. The growth of the peanut allergy market and the increase in food allergies is reason to believe that if Aimmune's products are successful in the clinic and approved by the FDA, the company has a bright future ahead. The global peanut allergy market is expected to grow at a compound annual growth rate of 111% to reach $4.5 billion in sales by 2027, and the U.S. will make up 88% of this market, a GlobalData report showed. The prevalence of food allergies among children climbed by 50% between 1997 and 2011, the Centers for Disease Control and Prevention reported. And according to the Food Allergy Research and Education website, more than 40% of children with food allergies have had serious reactions such as anaphylaxis, which sends the body into shock.

So how do things stand with Palforzia?

Analysts advise buying Aimmune shares, and the price target of $46.91 offers an upside of 38%. Things are looking bright, but the company still is facing a "make it or break it" moment, so investing in the shares right now is a big risk. A lot is riding on that FDA approval. But if Aimmune wins it, investors will likely have time to get in on this story, as it is one that will drive the shares higher over time.