Is this battered biotech stock now a good deal for investors?

Many investors and analysts alike were expecting Aimmune Therapeutics (AIMT) to become one of the big winners in the biotech world. The company received approval from the U.S. Food and Drug Administration (FDA) for a peanut allergy treatment back in January, so expectations were high as 2020 began.

However, Aimmune has suffered considerably so far this year. Shares have been on a steady decline, with the company losing about 60% of its value so far in 2020. What does this mean for investors considering this biotech company? Is now the time to stock up on shares while they are still cheap, or is Aimmune Therapeutics a little too volatile right now? Let's find out. 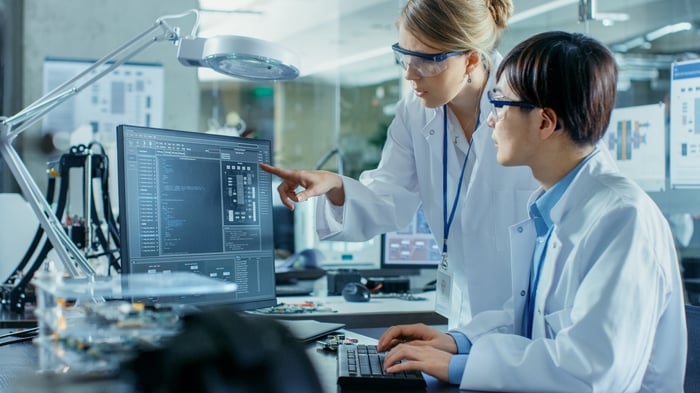 Peanut allergies are surprisingly common among people in developed countries. Some surveys suggest that about 2.5% of U.S. children have some form of peanut allergy, making it one of the most common food allergies out there.

Despite the prevalence of this problem among both children and adults, biotech companies have struggled to develop a drug that can successfully treat it. However, that all changed this January when Aimmune Therapeutics announced that its main candidate, Palforzia, had received FDA approval for patients between the ages of 4 and 17 with confirmed peanut allergies.

While the drug doesn't cure the allergies themselves, it does help mitigate allergic reactions by desensitizing the patient to peanut allergens. Late-stage clinical trials have shown that two-thirds of patients taking Palforzia managed to successfully tolerate increasing doses of peanut proteins throughout the trial. In comparison, just 4% of the placebo group managed to complete the study, with the rest having to stop due to allergic reactions.

Why did the stock collapse?

With such strong clinical results for this peanut allergy treatment, why has Aimmune lost almost two-thirds of its market cap since the start of the year? If you thought it must have something to do with COVID-19, you're right.

One requirement for patients taking Palforzia is that the first dose of each of the increasing dosage levels has to be administered in a certified healthcare environment. That means patients need to be physically present in doctors' offices, hospitals, and other healthcare locations on a reoccurring basis. Aimmune decided that many patients wouldn't be able to have this kind of access during the COVID-19 pandemic, so the company chose to suspend the launch of Palforzia altogether.

It was bad luck that Aimmune's long-expected product launch just happened to be planned for a time that turned out to be a historic pandemic. With no one knowing in the spring exactly how long this situation would last or how bad it would get, many investors were worried that Palforzia's initial pushback would extend for a long time, perhaps indefinitely.

As such, Aimmune's stock has been steadily declining over the past few months as the coronavirus has continued to spread. However, management has since said that Palforzia would begin returning to its previous launch plans once again, with many clinics having already begun to prescribe Palforzia to peanut allergy patients once more.

Aimmune has virtually no revenue to speak of. During the company's second financial quarter, product sales were literally nonexistent. This makes sense, as Palforzia's launch delay meant that the company's only product wouldn't be able to generate revenue.

In comparison, net losses for the quarter came in at $69.2 million. While that might seem pretty bad, the company has enough cash on hand -- $266.6 million to be precise -- to last until 2022, if not longer. The good news is that Aimmune's bottom line is expected to improve substantially as Palforzia's launch resumes and more doctors begin prescribing it to patients.

Is Aimmune a Buy?

While Palforzia has had a rocky start so far this year, the second half of 2020 holds a lot of promise for the drug. Perhaps the biggest catalyst for investors to look forward to is the European Medicines Agency's (EMA) expected Q4 action date for Palforzia in Europe. If the healthcare regulator approves the drug, this will open up another major market beyond the U.S.

Overall, there's a lot to look forward to when it comes to Aimmune Therapeutics. While year has been pretty bad if you just look at its stock price, it's really not the company's fault. Now that the panic surrounding COVID-19 is starting to subside and business is beginning to return to normal, revenue is expected to pick up substantially going forward.

For on-the-fence investors, now could be a rare opportunity to buy shares while they are still cheap.