iPhone and iPad users downloaded a lot of apps in 2019. Apple (NASDAQ:AAPL) says it paid out around $38 billion to App Store developers in 2019, suggesting consumers spent more than $50 billion total on apps and subscriptions last year.

Apple didn't release an update on cumulative developer payout (total since 2008) until the end of January last year when it reached $120 billion. But it did report an increase of 37% in App Store sales for the week from Christmas Eve to New Year's Eve, but just a 7% jump for New Year's Day. While overall sales growth may be slowing, growth in the App Store still appears to be fairly robust. 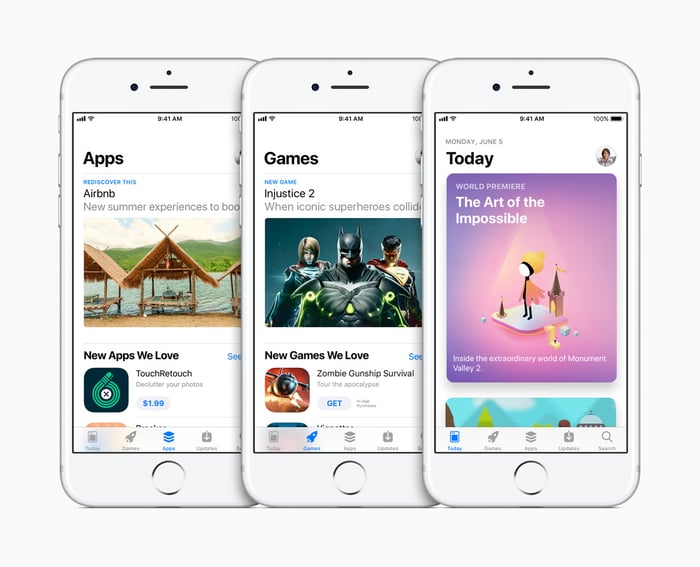 Apple's iPhone sales fell 14% in 2019, falling back to nearly the same level as 2017 and back below the previous peak sales in 2015. But that's more of an indicator that users are holding onto their devices longer rather than any failing on Apple's part. That's exemplified by the continued growth in App Store sales year after year.

Importantly, App Store downloads -- particularly paid downloads -- are likely to lock consumers into the Apple ecosystem. Switching to Android often requires users to download and pay for apps all over again, creating real switching costs for iPhone owners. As such, investors should expect a growing percentage of iPhone owners to buy a new iPhone when they're ready to upgrade their device in the future. (Many believe that could be next year with the introduction of 5G-capable devices.)

Meanwhile, Apple is able to generate considerable profits from existing customers and their App Store downloads. The net revenue Apple generates from the App Store, i.e. everything left over after paying out developers' share of sales, produces a gross margin of around 90% for Apple. Considering the size of the App Store, it's producing a significant portion of its bottom-line growth.

It's hard to argue a growing install base spending more on apps every year is a bad thing for Apple.

All that said, Apple is keen to highlight the many other ways it can monetize its install base through its various services. This year's highlights included mentions for Apple Music, Apple TV+, the Apple TV app, Apple Arcade, Apple News, Apple Podcasts, Apple Card, Apple Pay, and iCloud, where previous years' releases focused exclusively on the App Store.

Indeed, Apple realizes that maximizing the value of its customers now relies on getting them to pay for things during the ever-extending life-cycles of their devices.

Apple TV+ and Apple Arcade represent big bets in that regard. Apple is spending billions of dollars on content for both services with the hopes of locking customers in with a monthly subscription. Apple's profit margins on those services are directly tied to their success as it doesn't merely act as a distributor for other people's products -- it practically owns the products. If either attracts millions of users, it could have a considerable impact on Apple's bottom line.

Investors should note, Apple Arcade could cut into App Store sales as it grows in popularity. But the overall distribution in gross sales for Apple Arcade versus the App Store ought to favor Apple. This is similar to how Apple Music cannibalized iTunes, which is notably absent from Apple's roundup.

The Apple TV app, Apple News, and Apple Podcasts represent new ways for Apple to generate revenue by owning distribution. The Apple TV app uses a wholesale model to sell premium video subscriptions, which means Apple is in charge of pricing. That gives it a lot of flexibility to play around with promotions and bring in new revenue that consumers may currently spend through more traditional video distribution platforms. It could also serve to lock more consumers into the Apple ecosystem.

The inclusion of Apple Podcasts in the roundup suggests Apple may be looking into exploring new ways to monetize podcast listening in its app -- something music-streaming rival Spotify has made a big focus of its business.

Ultimately, however, the App Store remains a growth story for Apple. Not only were sales up considerably in a down year for iPhone sales, but it remains immensely profitable. App Store sales are a strong indicator of pent-up demand for iPhones, which could result in a return to unit sales growth in 2020. But even if it doesn't, the continued growth in Apple's install base indicated by strong App Store sales gives Apple plenty of opportunities to succeed with its new services.