Diabetes is a massive market in the healthcare sector. An estimated 415 million people have diabetes worldwide, and those numbers are growing. It's also an on-going healthcare issue, one that patients have to manage, often for the rest of their lives. As such, there is a lot of recurring revenue. It's not a bad idea to find a strong company focused on this vertical to add to your portfolio.

Over the last decade, one of the biggest stocks in healthcare has been diabetes specialist DexCom (NASDAQ:DXCM), a wireless health company that allows patients and doctors to track glucose levels in real-time. Another potential winner in this space is Livongo Health (NASDAQ:LVGO), an up-and-coming small-cap that sends updates, reminders, and coaching tips to all its clients with diabetes (and other health issues). And biotech company Provention Bio (NASDAQ:PRVB) is hoping to get approval from the Food and Drug Administration (FDA) for a drug that delays the onset of type 1 diabetes. Read more to see if any of these stocks are buys right now. 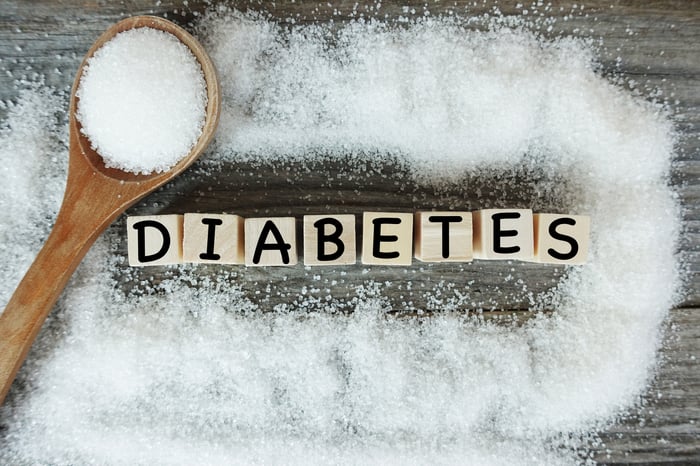 Dominating for a decade

DexCom, a $21 billion large-cap stock, has been dominant in healthcare for a long time. Over the last 10 years, shareholders have been rewarded with a 2,563% return. DexCom achieved that impressive return with a singular focus on diabetes. Traditionally, people with diabetes had to prick their finger to check their blood in order to monitor their insulin level. DexCom introduced a wireless device inserted under their skin. This sensor, called a continuous glucose monitor (CGM), is appreciated by patients because of its ease of use and valued by doctors because of its superior data and better health outcomes.

DexCom recently signed a distribution deal with Walgreens Boots Alliance to sell the CGM device. Patients insert a tiny sensor under the skin using an automatic applicator. DexCom's sensor starts automatically and continuously taking glucose readings in the patient's interstitial fluid. A micro-transmitter sends the data wirelessly to a receiver. Patients can read their own data in any connected smart device. The CGM can also be set to alert the patient if certain glucose levels are reached.

In its most recent quarter, DexCom reported $396 million in revenue for the quarter, 49% higher than the previous year. Net income was $60 million for the quarter. DexCom's main competition in this space is with Abbott Laboratories (NYSE:ABT) that sells a popular CGM device called Freestyle Libre. Abbott's CEO Miles White predicted in a conference call last year that his company's device would achieve sales of $5 billion a year (which would dwarf DexCom's $1.35 billion). So far, DexCom's fantastic numbers suggest DexCom is still winning in the diabetes space. Even with competition, clearly the market opportunity is vast.

Here's an upstart in diabetes

Livongo Health is a fascinating company and a rising star in personalized medicine. While unprofitable, the company has phenomenal revenue growth. It brought in $46 million in sales in its most recent quarter, up 148% year over year. Over 200,000 diabetes patients are on Livongo's messaging platform, up 118% year over year, and the company has 771 enterprise clients.  The company is creating additional verticals in prediabetes, hypertension, weight management, and behavioral health. Livongo specializes in helping all patients with chronic conditions, giving them advice, coaching tips, and interpretations of data readouts.

The company has conducted 48 studies measuring return on investment (ROI) and found that 90% of its clients had positive ROI in the first year. Indeed, some corporate clients are so happy with Livongo's offering, the clients are offering to reduce or eliminate the co-pay for hypertension or diabetes drugs for their employees, as long as the employees subscribe to Livongo.

So far, Livongo's stock has been a disappointment, down 30% from the company's initial public offering in July 2019.  The company has a $2.5 billion market cap, $400 million in cash, and no debt. Its price-to-sales ratio is 17, about the same as DexCom, while Livongo is growing revenues three times as fast. Gross margins are 74%, suggesting the company can become profitable at any time. Right now though, the company is focused on escalating its top-line growth. Livongo has formed partnerships with MDLIVE and Doctor on Demand to enable virtual access to doctors for all its clients, which will roll out in 2020. The future looks bright for Livongo Health.

A biotech that wants to delay the onset of diabetes

Provention Bio is an interesting biotech focused on preventing diseases before they become acute. It's a tiny company right now, with a market cap of $658 million. But the stock has been running wild, up 741% last year. What caused the stock to take off? The company reported amazing results in its phase 2 study for Teplizumab, a drug designed to delay the onset of diabetes in at-risk patients.

Provention has no profits and no revenues, so like many biotech stocks, it has to be considered speculative. On the other hand, the risk/reward ratio is very intriguing, since the diabetes market is so large.

After all, diabetes is a $45 billion market in the U.S. alone. Worldwide, the diabetes market will surpass $85 billion by 2022. It's a huge market opportunity for all three of these companies. Of the three stocks, DexCom has the largest upside. The stock has quadrupled over the last two years, so patient investors might wait for a better price.