We've all thought it: "Wouldn't it be great if one stock made me a millionaire?"

Hey, it's not that far-fetched. More people become millionaires thanks to the stock market than at the casino or playing the lottery. Top stocks like Netflix, Monster Beverage, and Booking Holdings have each returned more than 10,000% in just 15 years, turning every $10,000 investment into over $1 million -- if you were disciplined enough to not cash out early, that is.

So what about Beyond Meat (NASDAQ:BYND)? Could the plant-based protein company provide similar returns over the next 15 years and beyond, turning its shareholders into millionaires?

One thing is for sure: Those kinds of returns are impossible, unless the company can exponentially grow its revenue. 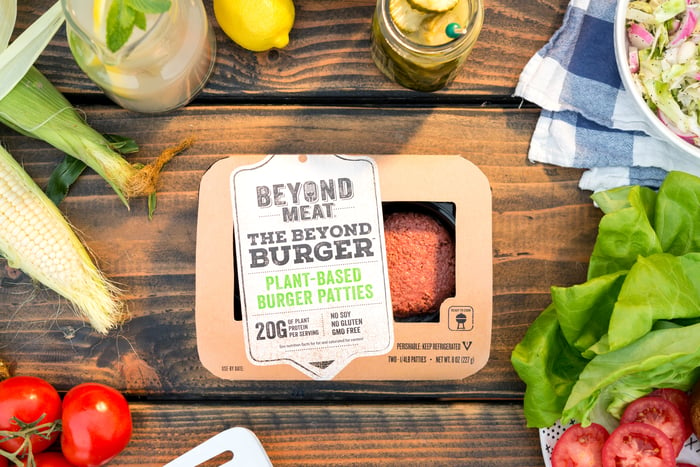 Beyond Meat grows revenue when it establishes new distribution channels and partners with new restaurants. For example, it just announced that it's bringing limited time menu items to Pollo Tropical, owned by Fiesta Restaurant Group. And it currently has deals in place at restaurants like Del Taco.

But these deals are relatively small. The biggest one so far is with Dunkin' Brands, where it landed a permanent menu item across a 9,000 location chain.

Beyond Meat's next deal might dwarf even the Dunkin' opportunity. It seems all but inevitable that it will be on the menu at McDonald's (NYSE:MCD) very soon. The fast food giant just announced that it's expanding a Beyond Meat experiment to 52 locations in Canada. The limited time P.L.T. (plant, lettuce, and tomato) burger started at just 28 locations, but the company saw enough promise to move forward.

This news comes in tandem with a Reuters report that Beyond Meat rival Impossible Foods withdrew from talks with McDonald's, because it was unable to meet potential demand. Beyond Meat now has an unimpeded shot at the world's #1 hamburger chain. 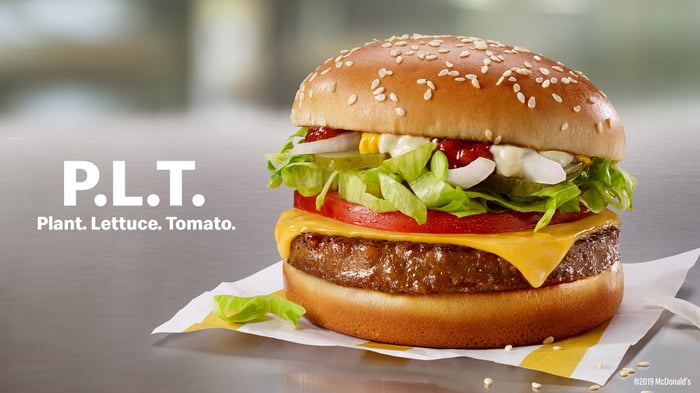 Is it unreasonable to hope that even 1% of McDonald's restaurant sales could go to a Beyond Meat burger? It's not (ahem) beyond possibility.

Consider that Restaurant Brands International added the Impossible Whopper to the Burger King menu, which was largely responsible for lifting comparable sales 5% in the third quarter of 2019. The average company-owned McDonald's generates around $3.6 million in annual revenue, and there are over 13,000 McDonald's locations in just the U.S. Assuming Beyond Meat menu items made up just 1% of McDonalds' U.S. sales, that would still generate well over $400 million annually.

Of course, it wouldn't boost Beyond Meat's top line by nearly that much as McDonald's would keep its own share. However, considering Beyond Meat's trailing 12-month revenue amounted to just $231 million, a McDonald's menu item is a huge deal.

It's worth noting that Beyond Meat is getting more profitable as revenue grows. In the third quarter of 2018, its gross margin stood at 19%, but in the same quarter of 2019, that figure nearly doubled to 36%. This shows that Beyond Meat's business benefits from scale, which bodes well as it inks major partnership deals.

There are other important growth drivers, such as new product lines (chicken) and international growth (did you know around 30% of India is vegetarian?).

But we should tap the brakes on all this enthusiasm. Beyond Meat undoubtedly has great growth opportunities, but it's a lot of hypotheticals, not a current reality.

Personally, I'm not convinced that demand, or at least general public demand, is sustainable. The novelty of it all is driving curiosity. For that reason, I prefer to wait on the sidelines and check in with restaurant chains like Dunkin' Brands and Burger King in a year or two to see how plant-based protein is holding up with diners. Considering the stock trades at over 20 times sales, any slowdown in demand that puts a dent in revenue growth is likely to send the stock plummeting.

So returning to our millionaire-maker question, Beyond Meat's market capitalization is around $5 billion as of this writing. To become a 100-bagger, it would need to become a $500 billion company.

For perspective, that's almost three times as big as McDonald's and Restaurant Brands International combined. Even if Beyond Meat perfectly captures its growth opportunities, 100-bagger status seems completely unrealistic, no matter how far out you look.

A more grounded question, then, is can Beyond Meat beat the market going forward? That is a much more reasonable hope. I'm still skeptical, but if plant-based meat alternatives become a lasting consumer trend, Beyond Meat is among the top companies and first movers in the space.