After the horrendous year in 2019 for most Canadian marijuana stocks, many investors might be thinking the smartest thing to do is stay away. But often when this sort of thinking gains sway, it turns out to be the best time to invest. As Warren Buffett once said, "Be fearful when others are greedy and greedy when others are fearful."

Although Canopy Growth (NASDAQ:CGC) shares sank nearly 22% last year, the company ended the year as the largest marijuana stock by market cap -- just as it was at the beginning of 2019. For investors who want to be greedy while others are fearful, the biggest pot stock around is definitely one to consider. But should you buy Canopy Growth in 2020? 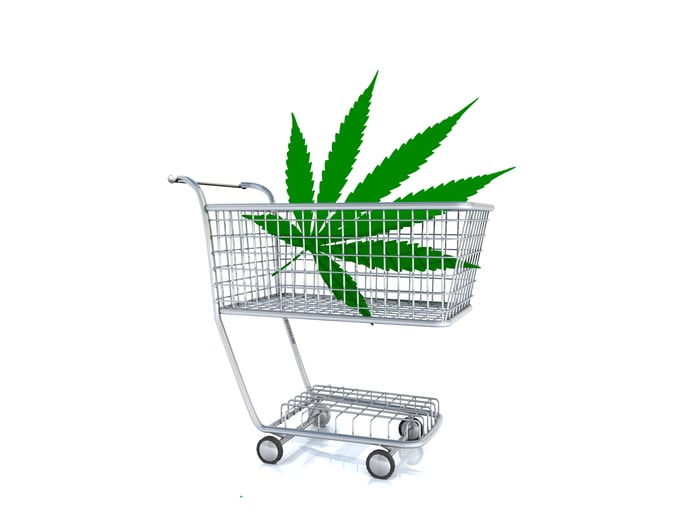 Let me first acknowledge the elephant in Canopy Growth's financial statements, which could cause many investors to head for the hills: The company continues to lose money hand over fist. It's an ugly picture.

In November, Canopy reported a fiscal second-quarter 2020 net loss of 374.6 million Canadian dollars. That dismal performance followed a net loss of CA$1.28 billion in the previous quarter. That massive loss, though, was due in large part to adjustments related to warrants held by Canopy's largest shareholder, Constellation Brands (NYSE:STZ).

The situation for Canopy Growth was so bad that former CEO and founder Bruce Linton was booted out in July 2019. And the reality is that the company won't be profitable anytime soon. Thanks in large part to Linton's largesse, Canopy continues to shell out a lot of money to reward employees with stock. Nearly one-third of the company's operating loss in the last quarter stemmed from share-based compensation.

In the past, when company executives talked about a path to profitability, they always limited the discussion to Canadian operations. But Canopy still plans to spend a lot of money to expand internationally, especially in the U.S., where it's expanding its hemp CBD (cannabidiol) business. The company also could have to fork over more than $3 billion to acquire Acreage Holdings, if the U.S. revises its federal marijuana laws in a way that allows Canopy to operate in the U.S. cannabis market and retain its listing on the New York Stock Exchange (a subsidiary of Intercontinental Exchange).

Despite the seemingly bleak financial picture, Canopy Growth still has plenty of positives. I'd put the company's partnership with Constellation Brands at the top of the list. Thanks to Constellation, Canopy still had CA$2.7 billion in cash, cash equivalents, and marketable securities at the end of September 2019. That's enough cash to carry the company for quite a while if it can curb its spending -- and I think it can.

One big reason why I think Canopy can control spending is the hire of David Klein as the company's new CEO. Klein served as Constellation Brands' CFO; he's also been on Canopy's board of directors for the last year. Klein takes over with a great degree of knowledge about Canopy's financial position. Without question, he was selected because Constellation was confident he would lead Canopy to exercise prudent financial discipline.

Tremendous revenue growth would also go a long way to cure Canopy's problems. My view is that the company will be in a better position to generate strong growth this year than it was in 2019. Probably the biggest factor behind my optimism is that Ontario plans to add significantly more retail cannabis stores, alleviating what has been a huge problem for Canopy Growth and its peers.

Another key growth driver for Canopy in 2020 is the Cannabis 2.0 derivatives market. I consider Canopy to be one of the most likely winners in this new market, with its broad lineup of cannabis-infused edibles, beverages, and vape products.

So should you buy Canopy Growth stock in 2020? It depends on what type of investor you are.

Risk-averse investors will be better off looking elsewhere. For conservative investors who would still like to potentially profit from growth in the global cannabis market, I think that Canopy's partner, Constellation Brands, is a good stock to consider. Constellation's leadership in the U.S. premium beer market gives it a solid foundation with steady revenue, while its 37% stake in Canopy gives it a way to profit from the marijuana boom.