It was a busy year for IPOs in 2019, and Pinterest (NYSE:PINS) was one of them. As exciting as it can be to invest in stock market debuts from day one, it's usually a better idea to sit on the sidelines and let the company report results for few quarters to better gauge the health of its business.

If you waited with Pinterest, I bet you're glad you did. As of this writing, shares are down 17% from where they opened on the first day of trading, and down nearly 50% from the highs set in August.

As we're about to see, Pinterest does face challenges that should be acknowledged, but they're not enough to keep investors from buying the stock today. 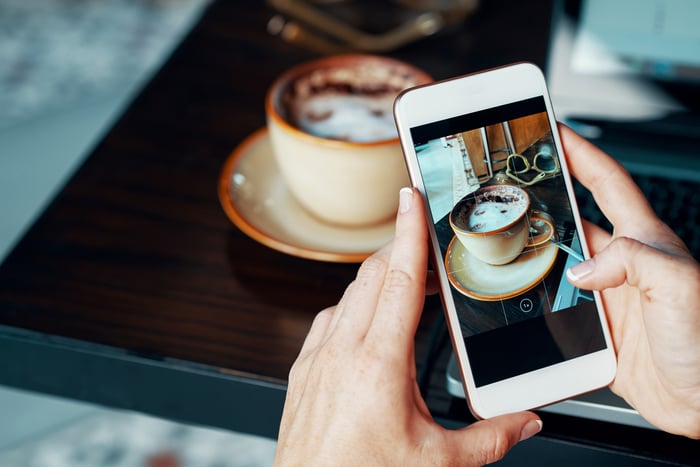 Pinterest, a visual social media platform, got crushed after reporting third-quarter 2019 results, as Wall Street fretted over slowing revenue growth. But that term can be misleading. After all, quarterly revenue still grew 47% year over year to $280 million. It just wasn't as good as the second quarter's 62% growth. If you can look past the slowing growth rate, key metrics are still healthy when compared with other social networks for the third quarter of 2019.

Chart by author. YOY = year over year. *Calculation by author based on revenue.

Note that this chart doesn't provide a purely apples-to-apples comparison. Pinterest and Facebook track monthly active users, while Twitter and Snap track daily active users. That said, these numbers demonstrate that Pinterest is growing its platform by attracting new users and that user monetization is improving. Both metrics are crucial to its long-term prospects.

But it's not all sunshine and roses for Pinterest. Monetizing the international user base is proving to be a challenge. As noted above, overall ARPU is $0.90. Drilling down into that number shows a much more robust $2.93 ARPU for the U.S., while international ARPU is dismal at just $0.13. If Pinterest is going to be a market-beating investment, it will have to improve that figure in its overseas markets.

Indeed, this is a topic management discusses with analysts during earnings calls. The company began advertising in nine new countries in the third quarer, bringing the total to 28. One of the things it's doing is offering educational tools to teach businesses how Pinterest can help them grow, but it's still too early to know if the strategy is working.

Another challenge for Pinterest is growth beyond its core demographic. The majority of its users are women, and the company estimates that 80% of U.S. women aged 18 to 64 (with children) are already part of its audience. This not only underscores the need (again) for improving international monetization but also the need to attract a more diverse user base to the platform. Not doing so will limit growth going forward.

By reporting $280 million in third-quarter revenue, Pinterest topped $1 billion in trailing-12-month revenue for the first time, an exciting milestone. The company trades for 11 times that revenue, which is expensive but comparable to its social media peers. However, value investors will likely feel the stock is overpriced since it reported a $125 million GAAP loss in its latest quarter.

Such losses are a valid concern, but also consider that the company generated approximately $50 million in free cash flow during the same period, and it has a pristine balance sheet with over $1 billion in cash and no debt.

Given this strong financial position, coupled with a growing user base and improving user monetization, I'd say the stock is a buy today -- at least worth a small position in a diversified portfolio. Any improvements in profitability or its international-user metrics would be reasons to add to a position.