The communications technology specialist's market-beating surge started with good news from leading client Apple and continued with analyst upgrades based on the company's opportunities in the 5G upgrade cycle.

Shares of communications chip designer Skyworks Solutions (SWKS 3.99%) rose 80.4% last year, according to data from S&P Global Market Intelligence. The first few months were a mixed bag for Skyworks, with nothing but blue skies ahead for this stock in the fall.

The hockey-stick moment for Skyworks occurred in early October when major customer Apple (AAPL 4.08%) was revealed to have boosted the production volume of its iPhone 11 smartphones. Skyworks' shares jumped 8% higher that day.

The momentum continued to build in mid-December as analyst firm Bank of America/Merrill Lynch upgraded the stock from underperform all the way to a buy. Merrill analyst Vivek Arya lifted his price target on the stock from $92 to $122 per share, citing the upcoming crush of 5G technologies that should drive "exponential" growth of 5G-capable component sales. That upgrade sparked a 17% rally over the next three weeks as investors and other analysts nodded along. 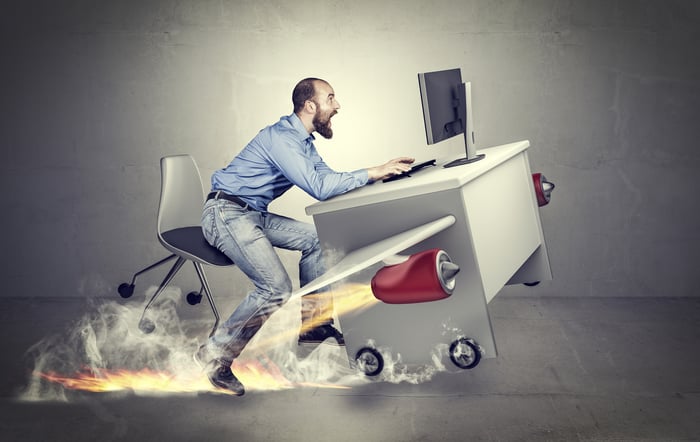 5G will most certainly be an important piece of Skyworks' strategy for the foreseeable future. The company already has 5G-enabled hardware in full production, as it looks for contracts on both the infrastructure and mobile device sides of those connections.

"We are seeing some great adoption with the handset players and they'll be ready to roll, but infrastructure has been a little bit slow," said CEO Liam Griffin in November's fourth-quarter earnings call. "We've been through 2G, 3G, 4G, we know how hard it is in 5G but it's a great opportunity. So... we're going to see an increasing level of revenue in 5G and it will not just be smartphones, it will be smartphones, it will be IoT, it will be enterprise, it will be factory automation and some incredible new avenues that we haven't even explored yet. So there's a lot coming and the business is ready to go."

This makes Skyworks a pretty pure play on the 5G revolution, which ties directly into other macro trends such as the Internet of Things and big data analysis. That's not a bad place to work at this generational juncture in the history of communications technology.