Molson Coors (NYSE:TAP) is in the midst of a transition that it hopes will leave it less reliant on beer sales. Management sees the future of the company in a broader-based beverage portfolio that includes non-alcoholic drinks, which is why, among other things, it replaced "brewing" in its official name to "beverage" last year, took a minority stake in an "emerging beverages" maker, and formed a partnership with marijuana producer HEXO (NASDAQ:HEXO) to produce cannabis-infused beverages.

Now, Molson Coors is selling one of its breweries because it no longer needs the capacity it provides. Because it has had a long-standing relationship with Pabst Brewing to produce its beer, it entered into an agreement to give Pabst the option to purchase the facility. 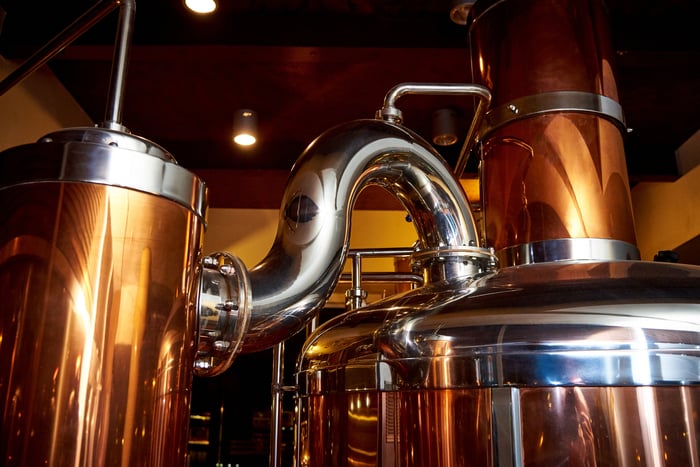 Although U.S. beer dollar sales are expected to finish higher year over year when the final results are tallied for 2019, that's only because that statistic includes sales of things that are not beer, like flavored malt beverages, which includes the high-growth hard seltzer segment. Sales for beer alone are on track to be down for the fourth consecutive year.

It's precisely because of the growth of such alternative drinks that Molson Coors was required to announce a "revitalization plan" last year. As CEO Gavin Hattersley noted at the time, "our business is at an inflection point." Either the brewer could continue to do things as it had previously -- a strategy that saw constant-currency net sales drop more than 2% in the third quarter -- or it could change direction.

It opted for the latter and has been moving aggressively to realign its operations.

Drinks for a new generation

The joint venture with HEXO was just one manifestation of management's realization that consumers were thinking differently about how and what they drank. The two will introduce half a dozen new cannabis drinks for the Canadian market that contain a mix of cannabidiol, or CBD, and THC. The beverages will be alcohol-free.

In that vein, Molson Coors' minority stake in L.A. Libations will give it a chance to branch out from beverages that give drinkers a buzz one way or the other.

For example, Molson acquired Clearly Kombucha in 2018, and the emerging drinks maker will help the brewer expand its availability. The president of Molson's emerging brands division said L.A. Libations' "expertise in creating and nurturing brands is especially valuable at a time when much of the growth in the beverage industry is coming from brands and categories that often were nonexistent five years ago."

L.A. Libations' health-and-wellness focus has allowed it to help established brands such as Zico coconut water, Core Water, and Body Armor expand, while also creating its own brands, like the plant-based Gloe.

Shedding a brewery isn't specifically part of the larger realignment Molson is undertaking, but the decline in beer drinking means the company will have sufficient capacity at other facilities to compensate.

The Irwindale brewery produced about 4.8 million barrels of Miller Lite, Coors Light, and Miller 64, as well as several Pabst brands last year. Molson's brewery in Golden, Colorado (which is getting a several-hundred-million-dollar modernization) and its Fort Worth, Texas, facility will pick up that production now.

Although Molson and Pabst have a long history together, in recent years the relationship has been rocky. Pabst even sued Molson over the latter's desire to close the California brewery. They settled their differences in 2018, and Pabst reached an agreement with contract brewer City Brewing in November to produce the majority of its beer under an agreement that runs through 2040.

Beer ain't what it used to be

The beer industry is changing as consumers become more health-conscious and their drink preferences evolve. Boston Beer, which has long been the face of the craft beer niche, now makes far more hard seltzer than beer.

Molson Coors is still primarily a brewer, regardless of its name change, but the percentage of its sales that beer represents seems likely to decline markedly over the next few years.