If the idea rings a bell, it may be because the prospect of e-commerce behemoth Amazon.com (NASDAQ:AMZN) acquiring brick-and-mortar outfit Kohl's (NYSE:KSS) first surfaced in 2017. Neither name floated the premise then, but plenty of other people did. Amazon had just purchased Whole Foods, and was experimenting with a small number of physical bookstores. A bigger retailing deal seemed to be a fairly natural progression, particularly given how Amazon was starting to dabble in private label goods. But, nothing ever came of it.

Perhaps now it will. Following Kohl's disappointing holiday sales report posted last week against the backdrop of the ongoing retail apocalypse, doing nothing doesn't feel right. It may not be the path the retailer wanted to take, but it may be the best one available to Kohl's from here.

Nothing else seems to be working

During the months of November and December when holiday-related spending was most frenzied, Kohl's saw same-store sales sink 0.2% versus expectations for a 0.4% improvement. Those tepid numbers prompted the retailer to dial back its full-year profit forecast to a range of between $4.75 to $4.95 per share, down from expectations between $5.15 and $5.45 per share. 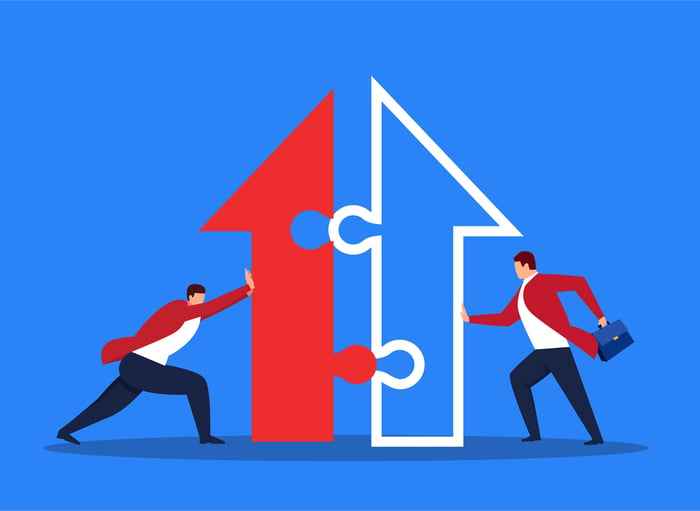 Of all the brick-and-mortar names that were supposed to see growth during the busy holiday shopping season, though, it was Kohl's. Early last year it expanded the program that turns its physical stores into return centers for Amazon.com, leading CEO Michelle Gass to tout the program and its potential during the company's third quarter conference call in November. More foot traffic spurred by Amazon's customers doesn't appear to have added sales, however. Perhaps the matter is beyond Kohl's control.

If that is indeed the case -- and the argument is a strong one -- Gass may want to start entertaining bolder options. The boldest and seemingly most exciting one is completely teaming up with Amazon.com.

Making the most out of private label

The proverbial win-win here is obvious, but likely underestimated by most investors.

Yes, Amazon would instantaneously own the physical footprint that it seems to want. Assuming its current market capitalization represents its value to a suitor, Amazon would have access to more than 1100 sizable retail locales for an affordable $7 billion; it spent $13.7 billion to own fewer than 500 Whole Foods stores, and groceries are a remarkably low margin business. Kohl's would enjoy a much stronger marketing effort too, with its parent able to direct more than 100 million U.S. customers toward the stores.

Such a pairing, however, would have much more meaningful strategic implications. A deeper relationship would be a means of giving Kohl's access to more exclusive brands that are now only part of Amazon's private label operation, and Kohl's would be a better distribution channel for those goods.

Amazon's foray into home-grown merchandise has led to the development of a few hundred brands, and it would be naive to suggest they've not rattled a few mid-sized rivals. But, its 100+ private label apparel names still only collectively account for about 1% of the company's own product lines, according to numbers from JungleScout. Most of the major apparel labels aren't sweating yet.

The struggle of Amazon's private label clothing effort at least partially points to the difficulty of shopping for apparel online. The garment can't be touched or tried on, preventing some consumers from making an online apparel purchase in the first place. More options to return ill-fitting clothing helps ease that friction, but it's still not enough. Access to that apparel in a physical store could only help sell more of those brands.

Access to physical selling space would also be a boost to Amazon's electronics business, and increasingly, its private label home goods business. Kohl's sells a fair amount of blenders, bedding, and small furniture, but Amazon has moved into the same space with its Stone & Beam brand of furniture, and AmazonBasics sheets, breadmakers, and cookware. Again though, that's often a hands-on purchasing process.

Admittedly, the idea is easier said than done. Private label goods sold in stores still have to be handled with care, as they compete with national, third party brands, and those outside vendors have plenty of experience not just with designing clothing and other hard line goods like kitchenware and luggage, but also with promoting those goods to pull them through distribution channels like Kohl's. About half of Kohl's top line is already driven by private label sales, and it's clearly not doing particularly well with its home-grown inventory. Yet, Amazon has little direct experience on this front.

A remix of its private label offerings and a good marketing jolt, however, could be a much-needed shakeup. Not only might that drive the average age of Kohl's customers from 50 to Amazon's average closer to 37, such a shift might inspire more frequent visits -- and purchases -- from Amazon's usually active customer base.

It certainly couldn't hurt in that regard ... that is, if Amazon is interested in taking on another project.