As good a year as 2019 was for the markets, it was an even better one for biotech. While the S&P 500 rose 30% during the year, many biotech stocks soared much higher. Axsome Therapeutics (NASDAQ:AXSM) skyrocketed more than 3,500% in 2019, dwarfing Seattle Genetics (NASDAQ:SGEN), which "only" doubled, while Vertex Pharmaceuticals' (NASDAQ:VRTX) 32% increase looked downright ordinary.

All three stocks finished the year trading around their five-year highs, and continuing to rise in 2020 may be a tall task for not just them, but biotech stocks in general.

Why have they done so well?

Biotech stocks are very sensitive to news. One major development -- such as a positive result from a clinical trial -- and share prices can take off in a hurry.

There were many reasons Axsome stock climbed during the year, and it didn't happen all at once. Although the stock's returns for 2019 had already hit 1,300% by December, shares of Axsome took off even higher when on Dec. 16, the company announced positive results from phase 3 trials of AXS-05. The drug "significantly improved symptoms of depression" and fared much better against the placebo. As a result of the positive findings, the company is planning to proceed with a new drug application in the latter half of this year.

It's a significant development for the company, and it stated in the release that, "If approved, AXS-05 would represent the first mechanistically novel oral pharmacotherapy for depression in over 30 years." 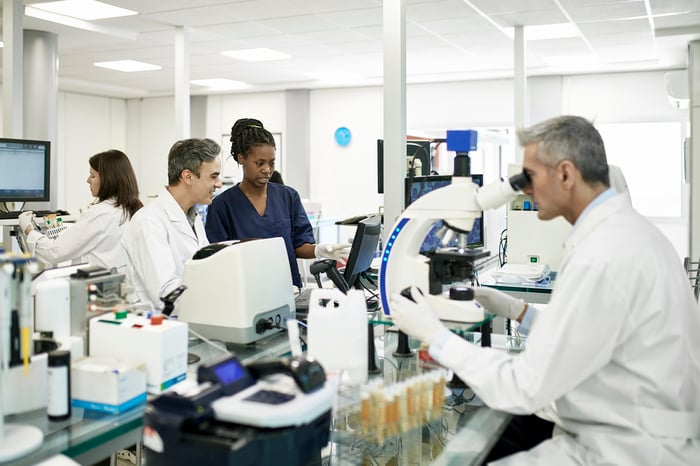 Seattle Genetics also got a bump in its share price in October, when the company released positive results from the phase 2 study of its HER2CLIMB breast cancer drug. It was successful in reducing death rates and the progression of the disease. The company is going to file a new drug application as well, as early as the first quarter of this year.

In addition to the positive drug results, Seattle Genetics gave investors more good news later in the month when it released its third-quarter results, which showed sales growth of 26% from the prior-year quarter. It also raised its guidance for the remainder of 2019. The stock rose on the results as the good news from the top line was more than enough to offset any concerns investors may have had that the company's bottom line was worse than analysts were expecting.

Vertex's stock was having a lackluster 2019 heading into October, with its shares flat since the beginning of the year. That changed, though, when investors learned that the Food and Drug Administration (FDA) approved the company's cystic fibrosis drug, Trikafta. It's a combination of three drugs, and the approval will allow it to be an option for 90% of people with cystic fibrosis, which is about 27,000 people in the U.S. Given the drug's expensive list price of more than $311,000, it could generate significant sales growth for the company.

Then, in November, Vertex and CRISPR Therapeutics together announced positive results from a gene-editing therapy the two companies are working on, CTX001, which treats people with blood disorders beta-thalassemia and sickle cell disease. While it's the first clinical trial -- and the results are still preliminary and only involved two patients -- it showed potential and was another bright spot behind which Vertex and its investors could rally.

Have shares soared too high?

Although each of the companies on this list has done well this past year, only Vertex has posted a profit over the past four quarters. However, that's not unusual for biotech stocks that are still in the early stages of their development; not only are they among the most volatile stocks, they're also not likely profitable, either. Investors are effectively paying for future expectations, and that's what can make them risky. And given how well these and other biotech stocks have done in 2019, it could make them vulnerable for a correction, whether it's this year or sometime down the road.

In Axsome's case, the company hasn't even generated any revenue yet. Investors are banking on the success and approval of AXS-05. The problem is that if there's a hiccup along the way, the stock could stumble as well. With little substance behind the stock other than future expectations, it could be vulnerable to a big correction.

However, the stocks that generate revenue are expensive, too. Seattle Genetics trades at 24 times its sales and more than 10 times book value. Both multiples are high for investors concerned about value. Pharmaceutical giant Johnson & Johnson trades at a more modest five times sales and seven times its book value. Vertex's valuation is a bit more modest, trading at 17 times sales and 11 times earnings, but they're still hefty premiums for investors to be paying.

A big development can generate a lot of hype for a stock, especially if investors expect that it will lead to significant growth down the road for a company. However, things don't always go as planned, and whether it's these or other biotech stocks, investors need to remember that clinical trials and new drug applications are not a sure thing. And when stocks are trading at high valuations, and investors are paying significant premiums for them, there's an increased risk that a correction could happen in the share price.

While investors can and should be excited about the progress biotech stocks make, that doesn't mean they should ignore valuations and neglect how much a company has proven today. Growth stocks can produce significant returns for investors, but they can also go in the other direction.

With biotech stocks doing so well in 2019 and an election upcoming this year that could have ramifications on the healthcare industry, there's ample risk for biotech investors, especially when it comes to stocks that are at high valuations. Rather than hopping on the bandwagon, investors should exercise a bit of caution when investing in biotech and ensure that there's still a solid business behind a company should an exciting new drug not pan out exactly as the company expects.