Sony (NYSE:SONY) recently stunned attendees at CES 2020 by unveiling an electric concept car called the Vision-S. The prototype car looks sleek, but Sony isn't entering the EV market to compete against Tesla or NIO -- it merely manufactured the car as a showcase for its other technologies. Let's see how those technologies could shape Sony's future.

The future of its I&SS business

Sony's image and sensing solutions (I&SS) unit has been its core growth engine over the past year. It generates most of its revenue by selling image sensors to smartphone makers, and sales have been surging on the rise of multi-camera phones. 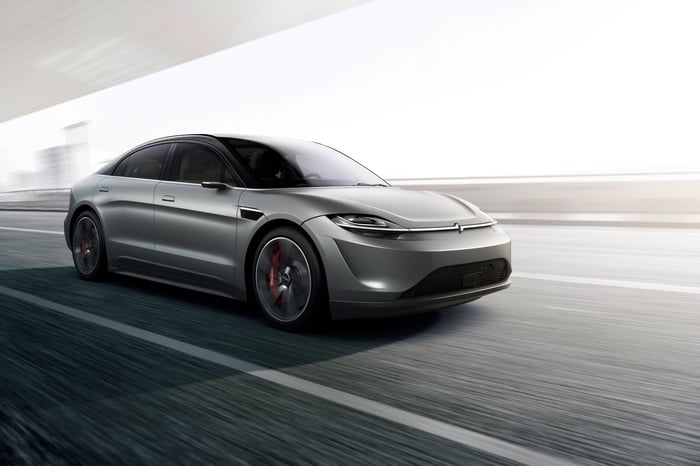 Sony's I&SS unit already supplies image sensors to roughly half the smartphone market. With the Vision-S, it demonstrates that the business also has a bright future in connected and driverless vehicles.

The Vision-S features 33 sensors embedded throughout the vehicle's interior and exterior. Time-of-Flight (ToF) camera sensors detect and recognize passengers in the cabin and measure their distance relative to the nearest digital screens. External CMOS image sensors track vehicles and pedestrians near the car.

Sony's sales of image sensors to smartphone makers may eventually decelerate, but the growth of connected and driverless cars -- which require a massive amount of cameras -- should easily pick up the slack.

The future of its electronic products and solutions business

The dashboard of the Vision-S is a wide edge-to-edge digital screen, and its rear seats are also equipped with digital screens. All four seats sport headrest speakers, which are equipped with "360 Reality Audio" -- which Sony calls a "deep and immersive experience" that will "encapsulate passengers in sound."

Those devices suggest that Sony's electronic products and solutions (EP&S) segment, which sells digital cameras, medical equipment, smartphones, TVs, and audio devices, could have a bright future beyond consumer electronics. It also mirrors Samsung's (OTC: SSNLF) moves into connected cars after its takeover of audio device maker HARMAN in 2016. Samsung and HARMAN notably unveiled a concept car at CES in 2018. 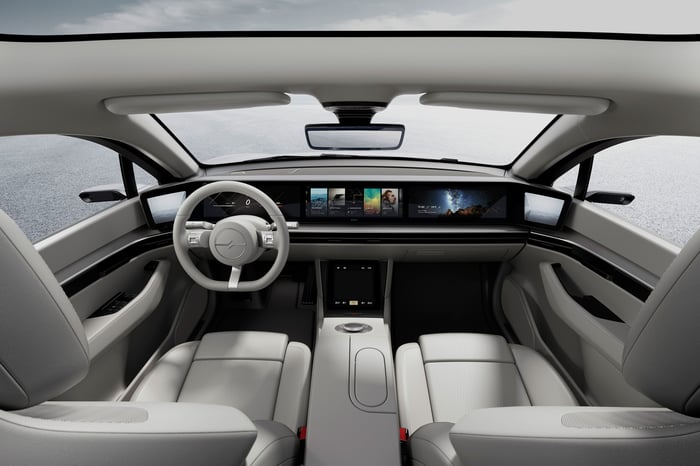 But for now, Sony's EP&S unit is struggling. Its revenue fell 13% annually to 977.4 billion yen ($8.9 billion), or 24% of its top line, in the first half of 2019. Sony mainly blamed the decline on sluggish sales of its smartphones and TVs -- two saturated markets that are dominated by Samsung.

However, the unit's operating profit rose 35% to 66.5 million yen ($600 million), or 13% of its operating income, as Sony cut costs across its product lines and restructured its struggling mobile unit.

But does Sony have a future as an auto supplier?

Sony's Vision-S indicates that the Japanese tech giant could benefit from the growth of connected and driverless cars. However, plenty of other companies have similar ideas.

Sony probably won't compete against those tech giants with end-to-end cockpit solutions, but it can aggressively market its image sensors, screens, and audio devices to those companies. In fact, NVIDIA, Qualcomm, and other companies all contributed to the development of the Vision S -- so investors should see these companies as Sony's potential allies instead of adversaries in the automotive market.