On Dec. 23, the S&P 500 added Live Nation Entertainment (NYSE:LYV), Zebra Technologies (NASDAQ:ZBRA) and Steris (NYSE:STE) to its index of 500 of the largest U.S. public companies. To add these three, three others got the boot. The market capitalizations of Affiliated Managers Group (NYSE:AMG), TripAdvisor (NASDAQ:TRIP), and Macerich (NYSE:MAC) have fallen, which led to these companies no longer rating as S&P 500 material.

Analysts have noticed that stocks temporarily jump in price upon being added to the S&P 500 index. But we're interested in the only term that really matters: the long term. Being added to an index doesn't make a stock a winner any more than being removed makes a stock a loser. In fact, I think TripAdvisor could still surprise investors with an upside return moving forward. Additionally, I believe Zebra Technologies can beat the market going forward -- demonstrating market beaters can come from both among and outside S&P 500 companies. 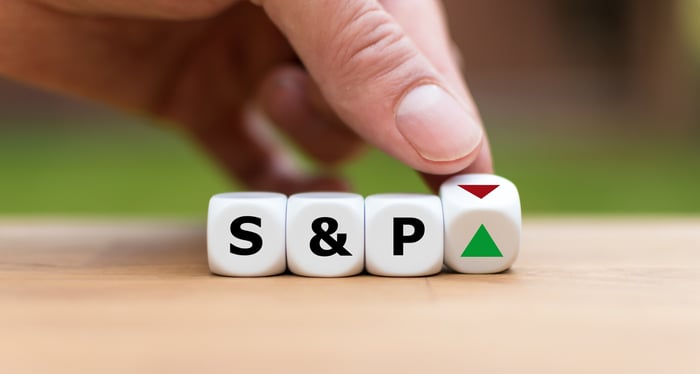 How Zebra stands out from the herd

Zebra Technologies is known for its hardware, specifically its barcode printers (hence the name Zebra) and its radio frequency identification (RFID) scanners. It's historically been used for inventory management, but over the years the company has smartly discovered new use cases, like its current partnership with the National Football League. You may be surprised to find out that NFL players are already wearing Zebra RFID labels, and Zebra scanners in stadiums track all movements, providing detailed statistics. While fun for fans, it's crucial for the league as it provides game data and statistics that were previously unavailable. Other new use cases include patient tracking at hospitals and employee management (sorry, your company-issued wristband might betray how often you visit the break room).

Imagining new contexts for collecting data obviously leads to more data creation, and therefore there's an increasing need for data storage and analytics. In mid-2019, Zebra went beyond being just a hardware company by launching Savanna Data Services -- a cloud-based data analytics software product. This is reported under the company's Services and Software segment, and only accounted for 13% of its third-quarter 2019 revenue. However, this segment grew 12% year over year, outpacing overall revenue growth of 3%.

An emerging trend in retail is that traditional businesses aren't going 100% e-commerce, but rather are embracing an omnichannel strategy -- one in which the online and physical store work together. Zebra looks to be a key player in this trend, being able to provide a complete package of inventory management hardware, and (more and more) software and analytics. While Q3 revenue was only up 3%, it should pick up as services and software make up a larger percentage of overall revenue going forward. And while investors wait for revenue growth to speed up, consider that 3% revenue growth was outpaced by non-GAAP earnings-per-share growth of 19% in Q3.

Don't check out on TripAdvisor yet

When TripAdvisor had its third-quarter 2019 earnings call, CEO Stephen Kaufer essentially said things were "difficult," and went straight to questions. Some things just can't be sugarcoated. Revenue was down 7% year over year, while net income was down 28%. Particularly troubling is that TripAdvisor's core business segment, hotels, saw revenues fall 12%.

TripAdvisor once had a higher valuation, but as the business stumbled, the stock fell much harder than the overall financials, until it was finally enough to get the S&P 500 boot. 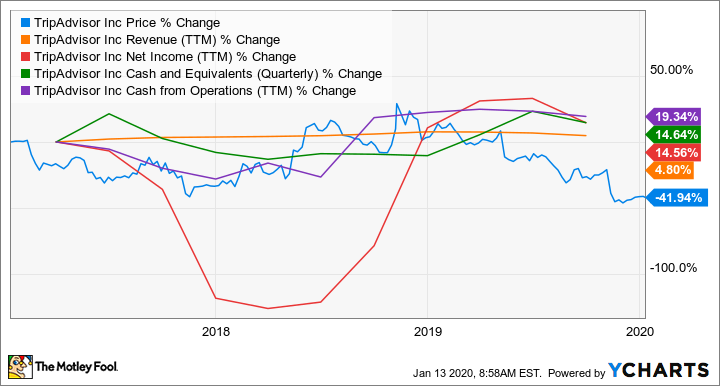 Aside from the financials, TripAdvisor's core platform remains strong. The company still has 460 million monthly visitors. Sure, that's down 6% from last year, but that's still more eyeballs than Pinterest's 322 monthly active users. Twitter no longer discloses monthly active users, but the last time it did (Q1 2019), there were 330 million -- 28% less than TripAdvisor. Granted, TripAdvisor isn't a social network, so the comparison is a little off. But it gives enough perspective for me to say that TripAdvisor's user base is huge. The company is merely struggling to effectively monetize that base. That could be fixable, although the company hasn't found a solution yet.

If TripAdvisor never quite solves monetization, this company still has value because of the data it has -- 830 million reviews and recommendations. It could be a situation like Fitbit, which struggled to grow the bottom line of its business but maintained a valuable asset in the health data collected by its fitness trackers. Alphabet likely acquired Fitbit not because it can't manufacture its own fitness tracker, but rather to mine the value from Fitbit's data.

Even with all that's happened, TripAdvisor remains profitable and trades for only 16 times forward earnings. And its balance sheet is strong, with nearly $1 billion in cash and a manageable debt load of $344 million. A special December $3.50 a share dividend will take a $490 million bite out of that, but it'll still be solid nonetheless.

Betting on TripAdvisor is admittedly betting on the upside from a declining business. That's riskier than investing in a growing business like Zebra Technologies. As we've already seen, Zebra looks to be riding a major industry tailwind in omnichannel retail. What's more, although it's now listed as one of the country's 500 largest publicly traded companies, it only trades around 17 times forward earnings, making it look more like a value stock than many others in the index.