Neither the personal computer market's woes nor printing's problems have been resolved yet, and they may not be for a while.

Neither is tremendous, but the first annual growth in personal computer deliveries since 2011 is still a big relative victory for names like HP and Dell Technologies. Things might have been even better had Intel (INTC 2.46%) not hit a couple of production speed bumps.

If you think the data marks a lasting turning point for HP and the personal computer industry, though, know you're going against the grain. Gartner believes the PC market is poised to run into a headwind -- as does IDC -- and the company's printer business continues to shrink as well. Contrary to glimmers of hope that seemed to start shining late last year, there's no proverbial light at the end of the tunnel.

There will come a time when consumers and smaller businesses alike have to invest in new hardware. There's only so much life anyone can squeeze out of an aging PC, and there's only so much functionality that can be extracted from alternatives like smartphones or tablets. Factor in that the stock's trading at a trailing twelve-month P/E of nearly 10 and that Xerox (XRX) continues to make acquisition overtures, and it seems like investors could certainly do worse than take a shot on a still-subdued HP.

But they could also do better than HP at the stock's current price. A lot better. 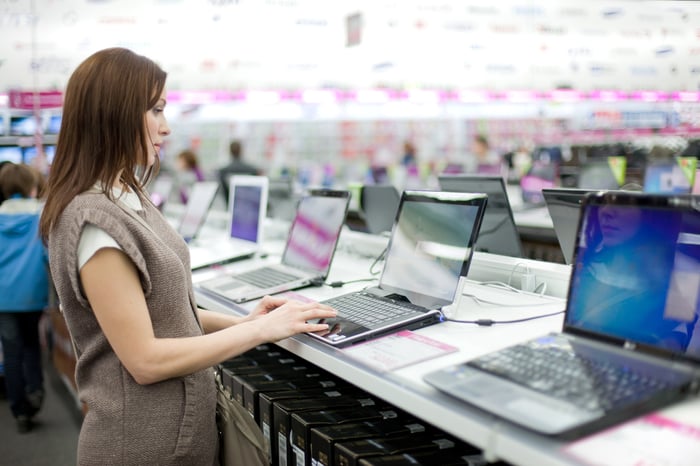 The strong quarterly finish to last year may have had more to do with the impending end of (free) support for Windows 7, and less to do with firm interest in newer computers. Microsoft (MSFT 2.76%) officially ended regular updates of the Windows 7 operating system on January 14th, with the earliest machines that natively used the OS now more than ten years old.

Moreover, some businesses rush to make purchases before the year-end for tax purposes, driving the uncharacteristic surge in demand during the quarter. Without those boosts, it's possible neither PC sales report would have looked so strong.

Value-minded investors expecting a recovery of the PC market to buoy HP in the near future will point out that there are on the order of 300 million computers in use that still utilize Windows 7. And those supporters are correct.

Those Windows 7 machines won't necessarily be replaced, however, and won't necessarily be replaced anytime soon if they're going to be replaced at all. Most Windows 7 devices can run Windows 10, which Microsoft still provides free of charge. Meanwhile, those computer owners may be holding out for more availability of Intel chips. There's also a sliver of these computer users that may simply not care about using a now-outdated operating system.

Whatever the reason -- and despite the sheer age of most Windows 7 computers -- the disinterest has prompted both Dell and HP to dish out cautious outlooks for a sizable portion of this year. IDC research manager Jitesh Ubrani agrees with the worry, commenting on IDC's analysis: "Despite the positivity surrounding 2019, the next twelve to eighteen months will be challenging for traditional PCs as the majority of Windows 10 upgrades will be in the rearview mirror and lingering concerns around component shortages and trade negotiations get ironed out."

Gartner's senior principal analyst Mikako Kitagawa is concerned as well, but for the longer term. Within the commentary of 2019's PC report, she conceded, "Looking ahead, Gartner predicts a continuous decline in the consumer PC market over the next five years," before going on to explain that innovation will be the critical factor in keeping the personal computer market propped up.

Whatever lies ahead, note that of the three major tech names in the personal computer business, HP saw the least growth in 2019. It appears to be the weakest of the weak, with analysts still modeling deteriorating results into 2022. 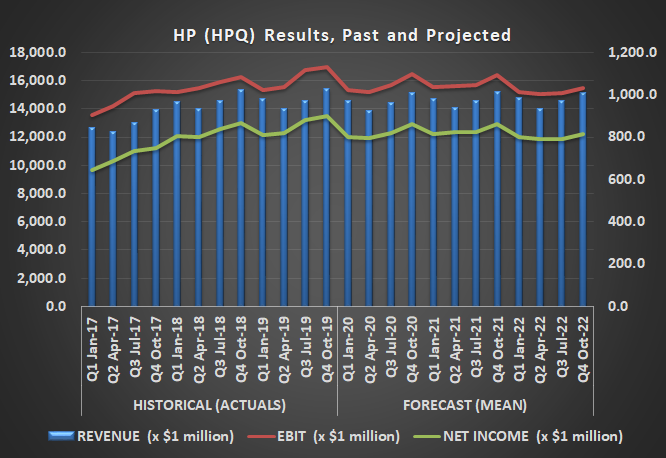 "Pushing the rock up the hill"

Simply put, neither of HP's core markets is in a great position to support a lasting turnaround.

On the PC front, it would require the convergence of the next version of Windows, and the availability of next-gen hardware from Intel and its rivals, and a giant leap in the functionality of netbooks and laptops, all at the same time, to put the personal computer market back on a longer-term, meaningful growth track. None of those are on the horizon at this time.

As for printing, it's never going away entirely, but consumers and companies alike are printing about 20% fewer documents than they were as recently as 2015 as digital storage options ramp up. And, to the extent printing is still needed, consumers and companies appear to be finding cheaper ink cartridges made by Chinese manufacturers, eating into the company's higher margin business. 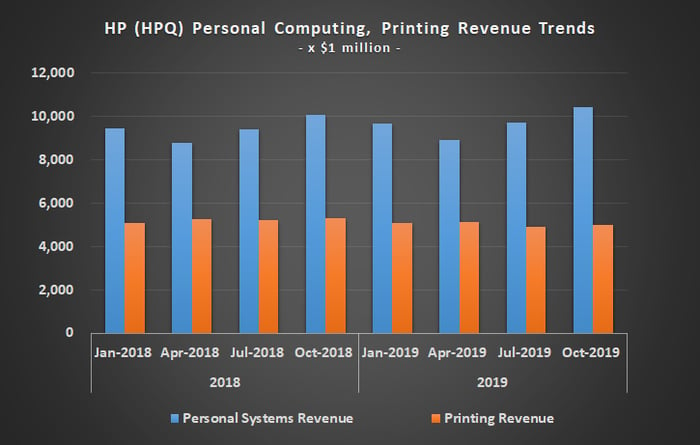 As NPD analyst Stephen Baker put it in November when Xerox first expressed interest, the company has "done the best they can, but they are pushing the rock up the hill." Gartner's and IDC's compelling 2019 numbers don't alter that overarching reality.