Please ensure Javascript is enabled for purposes of website accessibility
Log In Help Join The Motley Fool
Free Article Join Over 1 Million Premium Members And Get More In-Depth Stock Guidance and Research
By David Butler - Jan 16, 2020 at 6:15AM

For a simple, low-cost way to get broad exposure to the U.S. market, it's tough to beat a good exchange-traded fund.

If you're just beginning to learn how to invest in stocks, it can be wise to start building your portfolio around exchange-traded funds (ETFs), which offer an easy passive path to diversified holdings. To be clear, ETFs aim to essentially track the market, rather than beat it.

My preference when it comes to ETFs is to avoid overexposure to foreign markets. In Europe, economic trouble is being staved off by negative interest rates. China has shown some weakness, only partially due to its trade war with the U.S., and it's not clear that Asia is out of the woods yet. As the 2020 U.S. election heats up (and perhaps depending on how it turns out), China could well be in for more economic headwinds.

Given all that, it appears that the greatest strength right now economically is in the domestic market -- and that's where my list of top ETFs to buy largely focuses.

The Schwab US Large-Cap Growth ETF (SCHG 2.56%) offers domestic exposure to some of the best growth companies. The funds top 10 holdings include names like Apple, Microsoft, and Amazon, while also carrying exposure to the investment prowess of Berkshire Hathaway, as well as steady stocks like Visa and Mastercard. Some rank this as the best large-cap growth fund.

Overall, the fund has 29.20% of its holdings in technology, with its second-largest sector being defensive stocks at 16.94%. Over a 10-year period, it has averaged returns of 14.83% per year. Through the past three years, the fund has outpaced the S&P 500, but has generally closely tracked the index. It has been favored as a cheap play on domestic growth for years.

One reason for caution here would be the fund's 1.89% stake in UnitedHealth Group. As the 2020 election gets into full swing, healthcare stocks could face some bearish pressure from the rhetoric of democratic candidates, despite sound financials.

Since its launch in 2008, the Vanguard Mega Cap Growth ETF (MGK 2.67%) has been an excellent tracker of the S&P 500, and over the last three years, it has beaten the index annually. With an average risk rating from Morningstar, the fund tracks the CRSP US Mega Cap Growth Index. Once again, this is an easy, cost-efficient way to gain exposure to U.S. economic growth.

Its portfolio includes similar names to the Schwab US Large-Cap Growth ETF -- the difference between them lies largely in their asset allocations. Microsoft accounts for 10.47% of the Vanguard fund's holdings, followed closely by Apple at 9.84%. Other names include Amazon, Facebook, Alphabet, Home Depot, and the major credit card networks Mastercard and Visa. 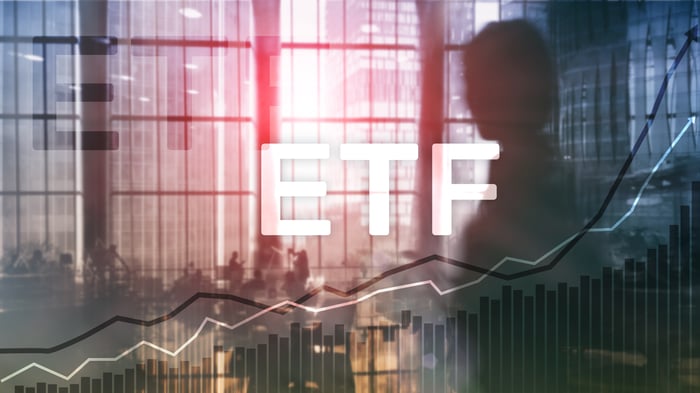 With an annualized rate of return of 9.29%, the SPDR S&P Dividend ETF (SDY 1.14%) obviously underperforms the market, but for the low-risk type of fund it is, it offers a good risk-reward scenario. The fund tracks the S&P High Yield Dividend Aristocrats Index, and has delivered an average annual dividend yield of 2.47%. Its portfolio is primarily focused on industrials, consumer defensives, consumer cyclicals, and financial services. Top names include AbbVie, AT&T, IBM, and ExxonMobil. Allocating to dividend based funds is never a bad move, and five-star rating from Morningstar demonstrates confidence in the ETF. It also carries a low expense ratio of 0.35.

While it's certainly a great ETF for investors seeking a passively managed fund, it is worth noting that its largest holdings are in technology -- a common area of high exposure these days. It also has a 16.11% stake in financial services and a 14.38% stake in healthcare. I like the healthcare industry, but again, companies in that sector could face some turbulence if Democrats gain more leverage in their quest for universal healthcare.

I love this ETF. Offering a dividend that currently yields 2.46%, and with a three-year trend of beating the S&P 500, the Vanguard Consumer Staples ETF (VDC 1.21%) invests in defensive equities to track the MSCI US Investable Market Index. Top holdings include names like Procter & Gamble, which is heavily weighted at 14.69% of the fund, Coca-Cola at 10.17%, and PepsiCo at 9.02%. With Walmart as the fourth-largest holding at 8.05%, you can see this ETF is focused on enduring leaders over the long term.

The one name that I don't like among its top 10 holdings is Altria Group. Though it offers a strong dividend, the share price has given up a lot of ground in the last three years. The tobacco giant is in an evolving industry with an unclear future, especially given the rise of legal cannabis.

This fund offers a more stable approach than highly growth-oriented funds. It's a good stable piece for a portfolio.

This ETF has only been around since the second half of 2017. Investing in equities that offer dividends and/or value returns through share buybacks, the iShares U.S. Dividend and Buyback ETF (NYSEMKT: DIVB) offers a different approach than most ETF's that simply chase the S&P 500, instead placing a heavy emphasis on financial services, technology ,and healthcare. Its dividend has yielded 2%, and it has averaged a 12.67% return.

While the fund has trailed the S&P 500 through most of its short existence, 2019 was a different story. The ETF kept up with the S&P throughout the year, all while investing in quality dividend stocks like Apple, JPMorgan, and Johnson & Johnson, while offering a low expense ratio of 0.25. The story of the markets remains in growth oriented names, but dividends offer the beauty of compound interest.