Please ensure Javascript is enabled for purposes of website accessibility
Log In Help Join The Motley Fool
Free Article Join Over 1 Million Premium Members And Get More In-Depth Stock Guidance and Research
By Alison Healey - Updated Jan 17, 2020 at 11:41AM

The U.S. government quietly extended a very valuable renewable energy tax credit at the end of the year. These two companies will likely be among its biggest beneficiaries.

As two of the most prolific U.S. developers of wind power projects, NextEra Energy (NEE 1.08%) and Avangrid (AGR 1.17%) should see lower project development costs and improved access to financing, thanks to another year of the wind production tax credit (PTC). While there was hope for the extension in the financial and energy communities toward the end of the year, there was no certainty. The extension was granted over the holidays and may have flown under the radar for some renewables investors, but now it's time to take a look at how these wind farm builders stand to gain and what that means for investors.

What the PTC does for wind project developers

The federal PTC was launched in 1992 to help companies that wanted to develop wind power projects, which at the time were scarce in the U.S. At the time, the cost of building the projects was prohibitive for all but a few on the forefront of the movement in California and a handful of demonstration and test projects.

Wind project developers typically use the credits by partnering with an entity that has bigger tax liability, like a bank, and letting that entity take advantage of the tax break during a wind project's early days of operation. In exchange, the developer gets capital to pay down construction debt, shoring up its finances and enabling it to move on and build another project. The credit has expired and been renewed many times, but has consistently been credited as a major factor that has fueled the exponential growth of wind projects over the past few decades.

Because the cost of building renewable energy has fallen significantly over the past several years, the credit has been slowly scaled back. When it was renewed in 2013, the PTC provided a maximum tax credit to a facility for 10 years of roughly $0.02 per kilowatt-hour of electricity generated. Projects that started construction in 2017 got 80% of that value; 2018 projects got 60%, and 2019 projects got 40%. Last month's extension was a big deal because it brought the percentage back up to 60%, meaning 2020 projects can be built with a better incentive than those started in 2019. 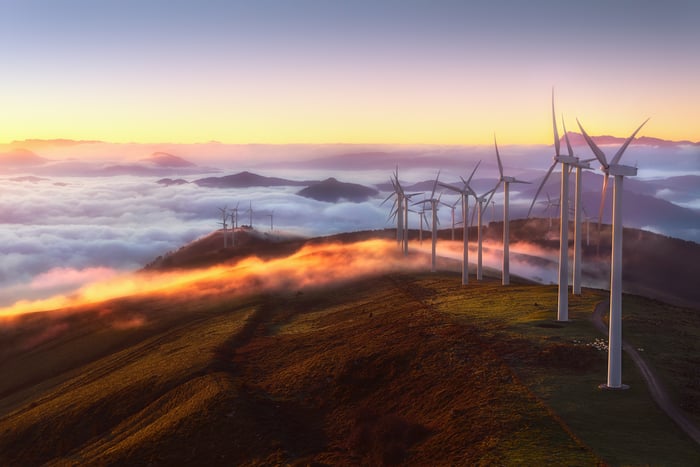 Why these two companies will benefit more than others

NextEra and Avangrid are likely to see the biggest gains from the extension based on project pipeline size alone. The companies are the two largest U.S.-based public wind power developers in terms of operating capacity, according to energy research firm Energy Acuity. They have also kept a focus on continuing to grow their U.S. wind holdings, even as many of their peers shifted to a more solar power-based agenda. It is important to note that the investment tax credit, or ITC, used to subsidize solar projects was not extended as part of the year-end PTC save.

Avangrid said in a recent presentation its onshore wind development pipeline stands at 5.7 GW. The company is also developing offshore wind projects, but they were not included in the tax credit extension.

Investors would be wise to keep both NextEra Energy and Avangrid on the radar. Both dividend-paying companies have assembled advanced and extensive networks of contracted assets that will provide steady streams of revenue into the future. Each also has a healthy pipeline of projects that can be built more cheaply and easily thanks to the PTC extension. This means projects could be put into service ahead of schedule in some cases, and revenue may grow at a better-than-expected pace. It is also important to note that each company has operations in other lines of business, like gas pipelines for NextEra and electricity distribution for Avangrid, so success is not dependent on wind power alone.