Please ensure Javascript is enabled for purposes of website accessibility
Log In Help Join The Motley Fool
Free Article Join Over 1 Million Premium Members And Get More In-Depth Stock Guidance and Research
By John Ballard - Jan 17, 2020 at 7:15AM

These three stocks could experience a huge tailwind from this rapidly growing market.

Augmented reality (AR) has been under development at tech giants like Microsoft (HoloLens) and Alphabet (Google Glass) for several years.

But the technology just started to break through to the mainstream a few years ago. Nintendo's Pokemon GO mobile game showed the world what AR can do for gaming when it was released in 2016. The app made headlines for having people walk around trying to catch digital creatures standing in the real world on a mobile screen.

Because AR lets you manipulate the real world with virtual objects, it could have a significant influence on every aspect of our lives, including how people communicate, shop, and play games -- not to mention the impact it will have on working professionals like architects and industrial designers. Goldman Sachs expects AR hardware and software sales to reach $48 billion by 2025. That's up from just $2.8 billion in 2018.

Investors looking to invest in the augmented reality market should look at Apple (AAPL -2.46%), Snap (SNAP 2.07%), and Wayfair (W 4.45%). Here is a review of how AR could affect these companies and earn investors some money in the process. 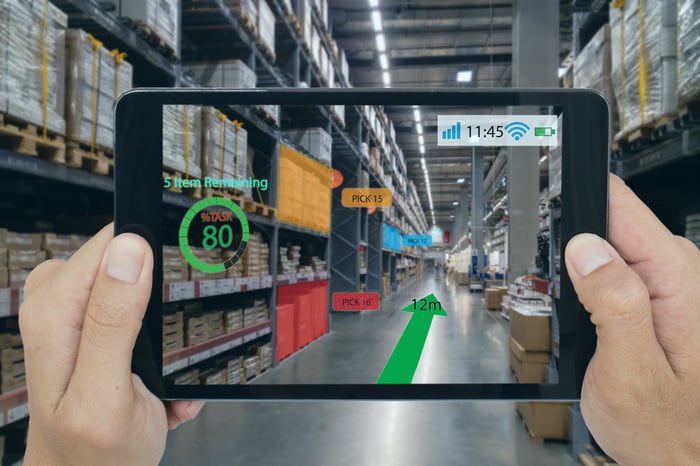 1. Apple: Its iOS is the largest AR development platform

When asked about the future of AR at Utah's Tech Tour event in 2016, Apple CEO Tim Cook explained that AR experiences will eventually become as common to everyday life as "eating three meals a day."

Cook is backing that up with real investment. Apple has increasingly been adding AR features to iOS over the last few years. I personally have found great use out of Apple's Measure app on the iPhone, which lets you measure the size of a three-dimensional object like a box using the phone's camera -- no tape measure required.

Instead of going the hardware route like its tech rivals, Apple thus far has chosen to deliver AR experiences through its iOS software on the iPhone. It was a smart move because there are 900 million iPhone users worldwide. When Apple released its ARKit for developers in 2017, the iPhone immediately became the largest AR development platform in the world. iOS developers now had hundreds of millions of customers for their AR-powered apps.

Cook boldly claims that AR will have a similar impact on the world as the first iPhone did in 2007. He's probably right, considering how the technology could affect just about every industry including games, shopping, and even construction.

Cook believes Apple has an advantage in the AR race. Unlike Google's Android, Apple's control over the hardware and software means that a new feature can scale quickly across the iPhone user base. Because there are different companies that manufacture devices for Android software, a new feature takes longer to scale across all the various models that use Android.

Apple has been awarded several patents for various AR techniques it's working on for iOS and headsets. But it's unclear whether Apple is interested in releasing a hardware product at this point, or if it will stick with software. Given its history, Apple won't release a new AR product unless management believes the technology is ready and can deliver a quality experience.

There is no question Apple will be a major beneficiary of AR adoption. If Apple releases an AR headset, it will have a built-in base of hundreds of millions of users who are already familiar with using the technology through their iOS devices. In that regard, there might not be a better AR stock than Apple.

Snap, which operates the popular Snapchat app, defines itself as "a camera company."

With a social media platform that reaches 210 million users and growing, Snap is well-positioned to capitalize on the AR trend.

In 2017, Snap launched Lens Studio, which allows its users to have fun taking pictures of things like their dog wearing virtual glasses, or turning a face into a talking potato head.

It's silly stuff, but users love it. Through the third quarter of 2019, Snapchat users had created over 600,000 Lenses. The best Lenses created by the community can draw billions of views, which helps Snap increase engagement.

New features like Lens can help Snap attract more users, which it can then monetize with advertising. The company has experienced explosive growth lately, with revenue up 50% year over year in the third quarter.

Snapchat's Lens Studio should see rising engagement over time, as the technology in mobile devices gets more advanced. Faster processors will enhance the AR capability of the phone's camera much further than it is now.

Keep an eye on Snap's games platform, where more advanced phones in the future could potentially create some interesting uses of AR technology, and draw even more users to Snapchat. 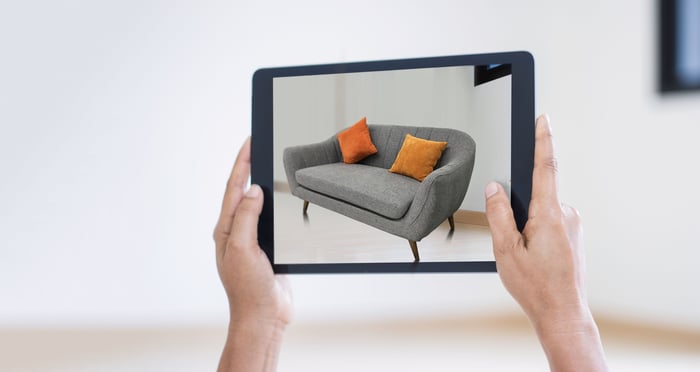 One obvious area where AR will have a huge impact is e-commerce. Some online stores are already integrating the use of AR, and one of those is the online home goods store Wayfair.

In November, Wayfair launched new features for its mobile app, including a new AR tool. The app now lets customers use its Room 3D feature to visualize how products will look in their home before they buy. The app also lets users take a photo of a room and interact with it by visualizing products in the space while on the go.

Also, Wayfair opened its first brick-and-mortar store in Natick, Massachusetts, last year, which offers a seamless offline-to-online shopping experience. The store features a Home Bar that offers design tools powered with AR to show customers "the future of home goods retail and how it can interact with their personalized space."

Wayfair has enjoyed tremendous growth over the last few years as it captures a significant share of home goods spending shifting online. AR will give online shoppers the confidence to select the right item for their room, and most importantly, have the confidence to click the order button. Wayfair could see its growth really take off over the next decade.

Prime your nest egg for the AR boom

AR certainly promises to be a game-changer for businesses and consumers. Apple, Snap, and Wayfair are three promising tech stocks that may see enormous benefits over the next decade from the rapid adoption of this new technology.