Please ensure Javascript is enabled for purposes of website accessibility
Log In Help Join The Motley Fool
Free Article Join Over 1 Million Premium Members And Get More In-Depth Stock Guidance and Research
By Timothy Green - Jan 17, 2020 at 11:58AM

Visa closed a huge acquisition and gained easier access to China, and some analysts became more optimistic about Apple.

The Dow Jones Industrial Average (^DJI 0.08%) managed another gain Friday morning, up 0.17% at 11 a.m. EST. Earnings season is just starting to ramp up, with reports from the major tech companies coming in the next couple of weeks. If results are disappointing, this rally could come to an abrupt end.

Rising on Friday were shares of Visa (V -0.71%) and Apple (AAPL -1.07%). Visa stock was up following two major developments over the past week, while Apple stock jumped after two analysts raised their price targets.

Shares of payments juggernaut Visa were having another good day on Friday, up 0.75% in the morning. If that gain holds, the stock will have risen more than 4.5% this week and about 8.75% over the past month. 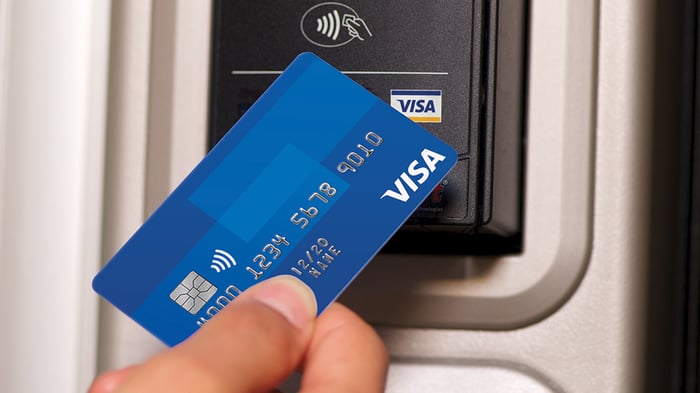 This is an expensive acquisition for Visa. Plaid reportedly had revenue between $100 million and $200 million in 2019, so Visa is paying somewhere between 26 times and 53 times annual sales. But that's a price Visa is willing to pay to tap into the growth of the fintech market.

The second piece of news came as part of the first phase of the trade deal between the U.S. and China. China agreed to make it easier for U.S. card companies to access China's multitrillion-payments market, saying it now won't take longer than 90 days to consider applications from electronic payments services providers.

With Visa betting big on fintech and having a shot at competing in China, investors found plenty of reasons to push up the stock this week.

Earlier this week, analysts at Canaccord Genuity raised their price target on Apple stock on optimism about 5G, among other things. Today, two more analysts followed suit with price target bumps of their own. Apple stock was up 0.3% as a result.

Morgan Stanley now has a $368 price target on Apple, up from a previous target of $296. The investment bank noted that the iPhone replacement cycle is now at nearly 4 years, lengthened by the end of subsidies and a slower pace of smartphone improvements. But Morgan Stanley expects longer battery life, 5G technology, and aggressive trade-in offers to compel iPhone users to upgrade, potentially shortening the length of the upgrade cycle.

Morgan Stanley also pointed to a lower iPhone dependence thanks to growth in services and wearables as a reason for the price target bump. However, many of Apple's non-iPhone businesses ultimately depend on the iPhone's success.

Analysts at Nomura weren't quite as optimistic. Nomura raised its price target from $225 to $280 due to strong iPhone 11 demand and solid growth in wearables, but it isn't betting that a 5G iPhone later this year will lead to a "supercycle" for Apple. Nomura sees the current valuation as stretched, only willing to apply a price-to-earnings ratio of 18.5 to arrive at its price target.

5G has the potential to drive users of older iPhones to upgrade in droves, but it's unclear how much consumers really care about the technology. If iPhone users balk at paying a premium for a 5G iPhone, the next upgrade cycle will be anything but super.