Please ensure Javascript is enabled for purposes of website accessibility
Log In Help Join The Motley Fool
Free Article Join Over 1 Million Premium Members And Get More In-Depth Stock Guidance and Research
By Daniel B. Kline - Jan 17, 2020 at 8:20AM

Should 45,000 human workers at the grocery and retail giant be worried?

Walmart (WMT 2.85%) employs 45,000 workers to pick orders for its grocery pickup business, according to comments made by a company executive at the 2019 Groceryshop convention. That's a sizable workforce manually doing work that seemingly could -- maybe should -- be automated.

That automation process has now started with the company testing its new Alphabot in its Salem, New Hampshire, location. The robot handles much of the order-picking process. That's good for investors watching the company's bottom line. It's less than encouraging for workers hoping to hold onto their jobs. 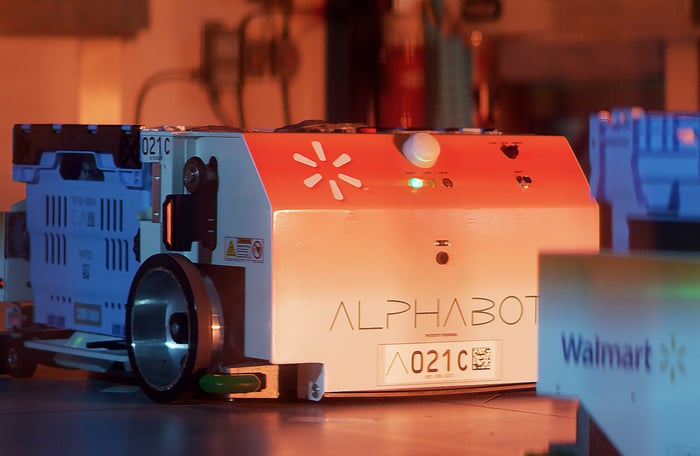 Walmart is testing the Alphabot in one location. Image source: Walmart.

The retailer has been building out its curbside grocery pickup and grocery delivery services. These offerings require the company to assemble orders that consumers place online. That's currently being done by humans -- the 45,000 people mentioned above -- but Alphabot could quickly cut into that workforce.

"The system operates inside a 20,000-square-foot warehouse-style space, using autonomous carts to retrieve ambient, refrigerated and frozen items ordered for online grocery," wrote Walmart's TJ Stallbaumer in a blog post. "After it retrieves them, Alphabot delivers the products to a workstation, where a Walmart associate checks, bags and delivers the final order."

Human workers will continue to hand-pick produce and other fresh items. That makes sense because frozen and packaged goods don't need to pass a quality assurance test while loose, fresh items do.

"By assembling and delivering orders to associates, Alphabot is streamlining the order process, allowing associates to do their jobs with greater speed and efficiency," Walmart's Senior Manager of Pickup Automation and Digital Operations Brian Roth said. "Ultimately, this will lower dispense times, increase accuracy and improve the entirety of online grocery. And it will help free associates to focus on service and selling, while the technology handles the more mundane, repeatable tasks."

What Roth said is true, but it's only part of the story. Yes, robots can free up human workers for customer service work that requires human interaction. The reality, however, is that the company will need fewer people overall as it adds Alphabot to more stores.

What's next for Walmart?

Currently, Alphabot only operates in one store. The chain is using that location to study processes and to figure out how to best deploy the technology.

Ultimately, it makes sense for Walmart to bring its robot to all of its locations. It will help it reduce headcount and lower long-term costs. That's essential if the chain wants to offer grocery pickup and delivery for a minimal added cost to consumers.

"This is going to be a transformative impact to Walmart's supply chain," Roth said. "Alphabot is what we think of as micro-fulfillment -- an inventive merger of e-commerce and brick-and-mortar methods."

Automation will help Walmart keep its costs in line (after the initial investment it takes to implement the technology). That's good for investors at the same time it's a threat to some of the company's workers.

Walmart is careful and executives like Roth always focus the discussion on how robots will free up human workers for other tasks. That's true, but it's only a piece of the story. Robots mean fewer people which lowers costs and allows the company to offer expanded grocery services cost-effectively.