The stock market is coming off a strong year in 2019, which was great for asset management companies that invest in securities in their mutual funds and portfolios. One of those firms, T. Rowe Price (TROW 2.20%), had a particularly good year, up approximately 32% in 2019 and 37% over the past 12 months. The stock outperformed most of its competitors as stocks in the S&P 500 Index overall had an average return of 28% over the trailing 12 months.

The stock has popped early this year, up about 6% already year-to-date. What has driven its success, and can it sustain its edge?

T. Rowe Price looks to benefit from a SECURE future

The Baltimore-based money manager has $1.126 trillion in assets under management (AUM) as of its last earnings report. Roughly $643 billion of that is in mutual funds, with $146 billion in fixed-income assets and $336 billion in multi-asset funds, which include target-date retirement products. AUM climbed about 4% year over year in the third quarter last year. The asset growth came mostly from the multi-asset retirement funds, which saw modest inflows and an asset increase of $3.7 billion in the quarter. 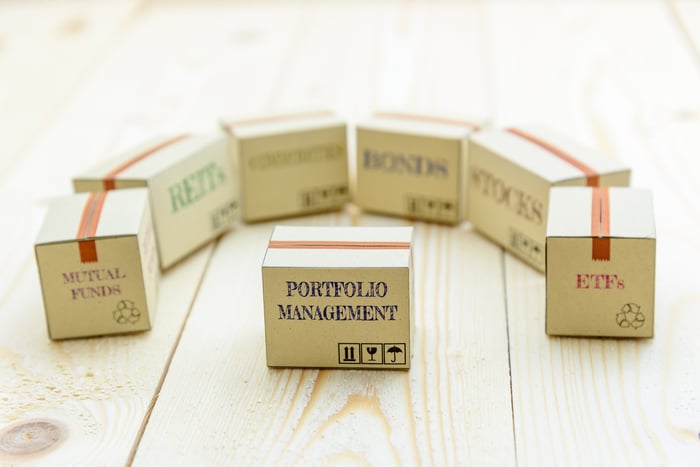 T. Rowe Price should benefit from the passage of the Setting Every Community Up for Retirement Enhancement Act, or the SECURE Act, which was approved by Congress late last year. The SECURE Act will expand access to 401(k) plans by allowing small employers to create multi-employer plans and allowing part-time workers to participate in retirement plans, among other provisions.

This should lead to more contributions and more assets in more plans, which is good for firms like T. Rowe Price, which is strong in the retirement market. Recently, the company has opened up new distribution channels for its retirement funds through Envestnet (ENV -0.30%) and Morningstar (MORN 2.44%).

T. Rowe Price's performance is rooted in solid fundamentals. It has no long-term debt and generates steady revenue growth. Net revenues jumped to $1.4 billion in the third quarter, up 2.3% year over year, while net income increased 3.9% to $659 million. It also has ample liquidity, which enables it to strategically deploy capital in growth opportunities, like its recent investment in electric vehicle manufacturer Rivian.

This also gives it money to spend on new products, like its line of actively managed ETFs that it is launching this year. "Passively managed, index-based strategies have fueled the growth of ETFs thus far," Tim Coyne, head of ETFs at T. Rowe Price, said. "But we believe that semi-transparent, actively managed ETFs from a trusted brand like T. Rowe Price have the potential to gain traction with investors and advisors who are already interested in active management but who might prefer the ETF structure. We believe this is a significant milestone that will lead to opening a new avenue for our business."

The company's stability can be measured by its stellar history of delivering dividends. The company has not reduced its quarterly dividend for 32 straight years. It currently pays out $0.76 per quarter per share, which comes out to $3.04 annually per share. Since Dec. 31, 2009, it's gone up $0.51 a share, and over the past five years it has increased $0.32 a share. It pays a yield of 2.3% per year with a payout ratio of 38%.

With a price-to-earnings ratio of 16.52, the stock is attractively priced and, with its strong fundamentals and solid balance sheet, it should continue to generate earnings growth and outperform.

Here's 1 Dividend Aristocrat You Can Buy On Sale Today

Should You Buy This Beaten-Down Dividend Aristocrat?