Please ensure Javascript is enabled for purposes of website accessibility
Log In Help Join The Motley Fool
Free Article Join Over 1 Million Premium Members And Get More In-Depth Stock Guidance and Research
By Daniel Foelber - Jan 19, 2020 at 6:03AM

How Southwest is faring in the face of ongoing MAX groundings.

Southwest Airlines (LUV 4.98%) posted a record financial performance in Q3 2019 -- perfect timing for a decade that boosted shares of Southwest up 372%, about double the S&P 500.

Southwest will report Q4 2019 earnings on Jan. 23, along with competitors American Airlines, JetBlue Airways, and Alaska Air Group. Here's a look at Southwest's 2019 performance and what to expect from this quarter and the years ahead. 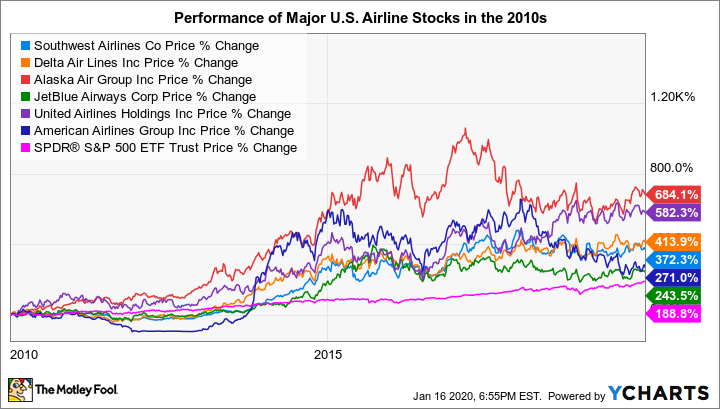 Southwest has a history of financial strength and a reputation for a rock-solid balance sheet. Southwest's fundamentals, consistent performance, and low P/E ratio that is about half of the S&P 500 make it a premier value stock.

Despite droves of airline bankruptcies in the early and mid-2000s, including United Airlines and Delta Air Lines,followed by American Airlines in 2011, Southwest has remained profitable for 46 consecutive years. 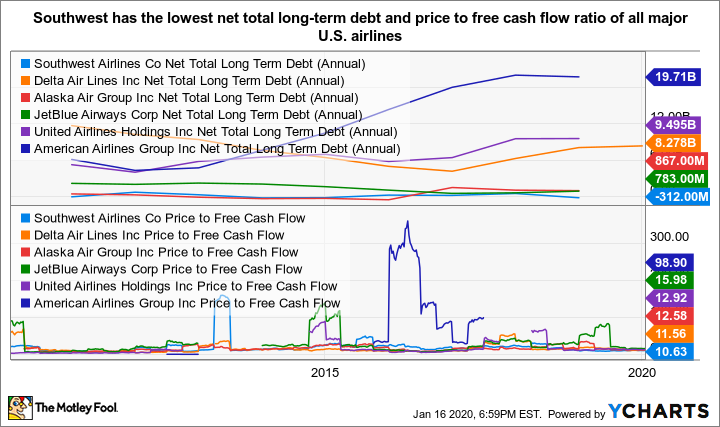 Regarded as a fun-loving airline dedicated to its people, Southwest is also the only company out of the six major U.S. airlines to have negative net total long-term debt.

As a result of its capital discipline, Southwest also has the lowest Price to Free Cash Flow (FCF) of the six major airlines, with a market capitalization that is just 10.6 times FCF. Free cash flow is a means to fund growth outside of typical operations, such as returning cash to shareholders in the form of a dividend or buying back stock. Although not an elite dividend stock, Southwest yields 1.3% and raised its dividend 200% over the past five years. 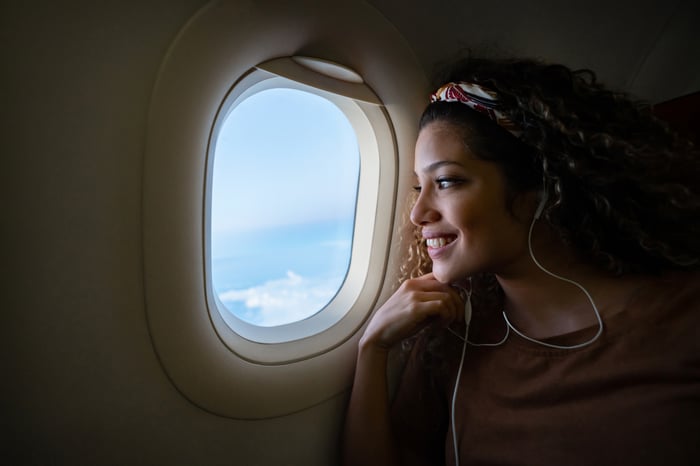 Boeing, like many airlines, expected the groundings to cease before 2019 year-end, but the planes remain out of service. The delays have forced airlines to prepare for the worst. American Airlines has delayed service of its Boeing 737 MAX fleet until April 7, 2020, Southwest until mid-April, and United until June 4, 2020, costing billions for Boeing and hundreds of millions for these airlines.

Southwest's record quarter despite the MAX delays is impressive when you consider the airline can't fly its 34 MAX planes. Southwest was originally expecting 113 737s by year-end 2020, but that forecast will probably go down the longer the planes stay grounded.

That being said, the company's resilience in the face of adversity speaks volumes to Southwest doing what it can despite an unfortunate situation.

Fuel costs used to be one of the biggest headwinds for airlines until the rise of U.S. oil supply drove prices down to what's widely considered a less volatile, more playable range. This surge in domestic production was enough to spark even the interest of Warren Buffett, a long-term critic of airlines who began buying stock in four of the majors in 2016 .

Southwest doesn't forecast fourth-quarter results to be as good as the third quarter, but RASM is expected to be up as high as 2% YoY.

Southwest noted that removing the MAX from its flight schedule is hurting capacity. Since Southwest is forced to operate with a smaller than expected fleet, there is "less flying in peak periods than planned, or optimal."  In sum, Southwest is doing just about everything in its control to improve the situation, but there's no understating the negative effects the MAX groundings are having on its earnings.

Investors should be on the lookout for any adjustments Southwest makes to its Boeing 737 MAX flight schedule based on fourth-quarter results, as well as how the bottom line fared during a quarter that was intended to have the first wave of Southwest's MAX planes in service.

Southwest's ability to break records, keep its debt low, and retain the lowest price to FCF despite its susceptibility to the MAX groundings is a testament to the company's quality, making Southwest a buy despite the current predicament.