Please ensure Javascript is enabled for purposes of website accessibility
Log In Help Join The Motley Fool
Free Article Join Over 1 Million Premium Members And Get More In-Depth Stock Guidance and Research
By Adam Levy - Jan 21, 2020 at 10:55AM

And the music streaming app has a lot more room left to grow.

YouTube overhauled its music streaming app in early 2018, and it's taken off since then.

Much of that growth stems from launches in developing markets like India and Brazil, that capitalizes on the popularity of its free video streaming platform on mobile.

Spotify (SPOT -4.75%) has contended that YouTube is the biggest free music streaming service in the world since it filed to go public. And since it made its direct listing, YouTube Music has proven a formidable competitor. Spotify still boasts a lot more users than YouTube -- 248 million total including 113 million premium subscribers -- but the success of YouTube cannot be discounted. 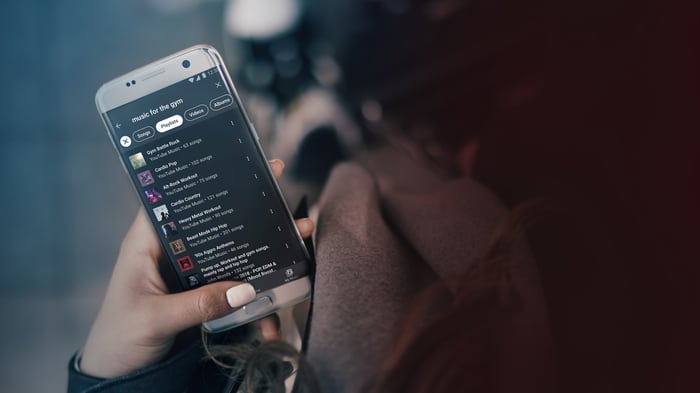 YouTube is well-positioned to offer users a free listening experience, thanks to its existing deals with record labels for its video streaming app. The free listening tier has enabled it to attract millions of listeners in quick order.

In India, for example, YouTube Music saw 3 million downloads within its first week of launch, and has about 10 million active users as of the end of 2019. Just 800,000 of those users pay to listen ad-free. Still, that 800,000 paid subscriber count makes YouTube Music the most popular paid streaming option in the country.

The free tier has been a key pipeline for Spotify, differentiating it from competitors like Apple (AAPL -1.07%) Music, which only has a paid tier. Other competitors offer a free tier, but severely limit listening options. The free tier is particularly important in attracting consumers in emerging markets where discretionary budgets are thin.

That's particularly noticeable in the discrepancy between Spotify's total listeners and its paid listeners in Latin America and the rest of the world. Those regions account for 38% of its total users, but just 30% of subscribers. What's more, that gap is widening. It was just 4 percentage points a year ago.

YouTube's ability to offer a free tier makes it easy for consumers to try out the service, but YouTube has several advantages that can improve everything from gross additions to user retention.

First and foremost, YouTube's brand is extremely well-known all over the world. It has over 2 billion monthly active users, most of whom use it on mobile. App Annie says YouTube Music's growth largely stems from cross-promotion in YouTube and Google's other apps.

Finally, YouTube is taking advantage of its user data and its parent companies' artificial intelligence to create algorithmically generated playlists. It launched its first set of playlists in December. Spotify pointed to its playlists, including personalized playlists, as a competitive advantage in its S-1 filing in 2018. They account for about 17% of listening hours on the platform.

Spotify notably uses Google's cloud computing platform in order to crunch the data and generate personalized playlists for its 248 million users. YouTube is able to use that same technology to feed its own algorithms.

It's worth pointing out that Google is only just starting to invest resources in YouTube Music, and two of these big moves -- making it the default app and introducing personalized playlists -- are only a few months old. Both could result in much more user growth in 2020 and beyond, particularly in emerging markets where there are still lots of consumers to win over.

Will YouTube's TV Shows Remind You of the Netflix Experience?

Why Alphabet Stock Has Surged This Week