Please ensure Javascript is enabled for purposes of website accessibility
Log In Help Join The Motley Fool
Free Article Join Over 1 Million Premium Members And Get More In-Depth Stock Guidance and Research
By Evan Niu, CFA - Jan 23, 2020 at 7:00AM

The popular messaging service is changing its revenue strategy once again.

At $22 billion, WhatsApp is Facebook's (META 7.19%) largest acquisition to date by a significant margin. The next biggest purchase was Oculus for just $2 billion, or less than 1/10th of what Facebook paid for the messaging service. Yet more than five years after Facebook closed the WhatsApp deal in October 2014, WhatsApp still doesn't bring in any material revenue.

Facebook is reportedly axing its plans to monetize WhatsApp with ads, and in doing so is going back to its original strategy.

The Wall Street Journal reported earlier this month that Facebook had disbanded the team that had been working on incorporating ads into WhatsApp. The company had been talking up the potential of Status ads -- WhatsApp's take on the popular Stories format -- but that effort is now on hold, although Status ads may still be introduced later, according to the report.

The push toward ad monetization was a major factor in WhatsApp co-founders Jan Koum and Brian Acton leaving the company in late 2017 and early 2018. Despite initially promising WhatsApp that it could remain independent, Facebook started exerting more control over WhatsApp's user data and pressuring the subsidiary to start monetizing the service with ads. That was in stark contrast to CEO Mark Zuckerberg's initial statement when announcing the acquisition that "I don't personally think ads are the right way to monetize messaging."

Instead, WhatsApp is turning its attention back to its initial monetization strategy of connecting its 1.5 billion users with businesses, offering a suite of tools that allow companies to deliver customer service, manage conversations, and more -- for a fee.

Every few years, I revisit the risk that Facebook may eventually have to recognize a massive impairment related to the goodwill it recorded as part of that deal. Goodwill represents the premium paid over the fair value of assets acquired. In paying $22 billion for a company that had trailing-12-month (TTM) revenue of just $22.7 million and TTM net losses of $311.9 million at the time, the vast majority of Facebook's current goodwill is attributable to the WhatsApp deal. 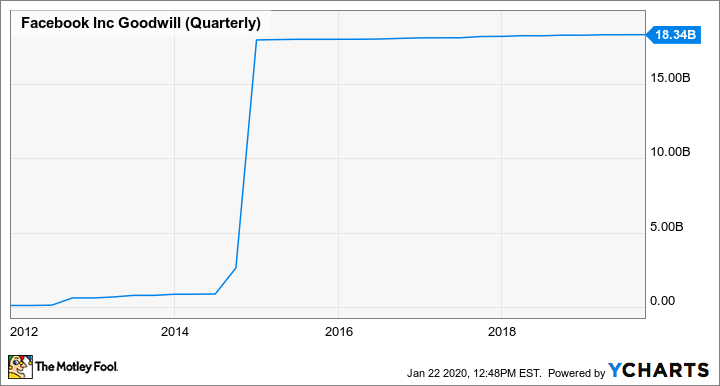 The tech giant still has this potential time bomb just sitting on its balance sheet, and if WhatsApp fails to prove its worth, Facebook will have to eat an enormous charge. Here's how the company frames the risk in regulatory filings:

We test goodwill for impairment at least annually. If such goodwill or finite-lived intangible assets are deemed to be impaired, an impairment loss equal to the amount by which the carrying amount exceeds the fair value of the assets would be recognized. We may be required to record a significant charge in our financial statements during the period in which any impairment of our goodwill or finite-lived intangible assets is determined, which would negatively affect our results of operations.