Please ensure Javascript is enabled for purposes of website accessibility
Log In Help Join The Motley Fool
Free Article Join Over 1 Million Premium Members And Get More In-Depth Stock Guidance and Research
By Daniel Foelber - Updated Jan 23, 2020 at 11:28AM

Can the worst-performing major U.S. airline turn it around in 2020?

The smallest of the six major U.S. airlines by market capitalization,JetBlue Airways (JBLU -6.59%), is a discount airline that covers North America, Central America, and South America. Unfortunately for JetBlue, its stock was the worst-performing of the major airlines last decade. However, the stock was still able to climb more than the S&P 500. Lacking a dividend, is JetBlue worth considering or is there a better case to be made for other airline stocks? 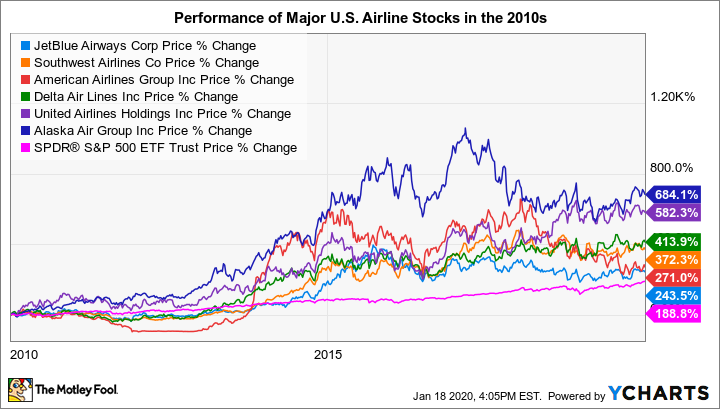 Similar to the second smallest major U.S. airline by market capitalization, Alaska Air (ALK -1.06%), JetBlue has coverage throughout major cities in the U.S. but also specializes in a particular region. For JetBlue, that region is Latin America, specifically the Caribbean. During its third-quarter 2019 conference call, CFO Stephen Priest notes revenue challenges in JetBlue's Latin America/Caribbean region, contributing to revenue growth of just 4% year over year.

For a while now, JetBlue has been struggling with revenue growth, and that struggle looks to continue. The company's COO, Joanna Geraghty, "expects low-single-digit RASM growth for 2020." 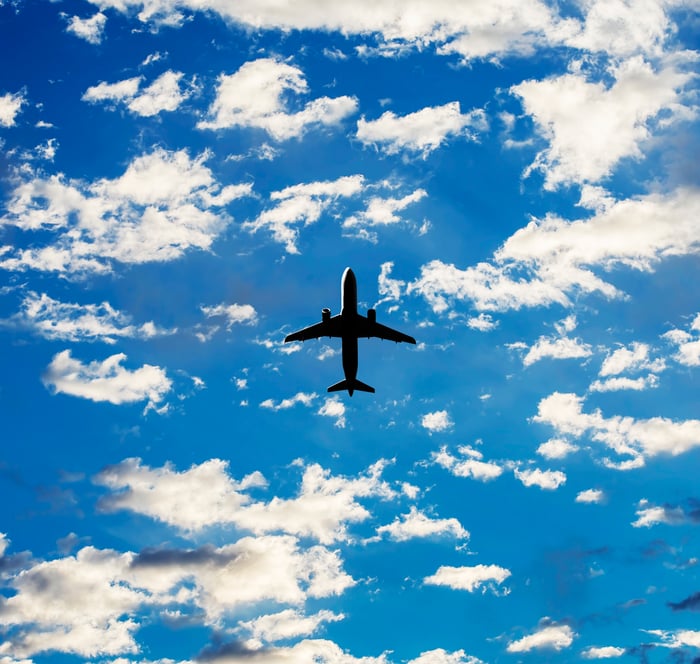 JetBlue's anticipated revenue declines come despite capacity increases that are forecasted to be between 4.5% and 6.5% in Q4 2019, resulting in an impressive total 2019 increase of 6% to 7%.

Also on the positive side, JetBlue's fleet is predominately Airbus and Embraer aircraft, meaning it isn't as impacted by the Boeing (BA -1.25%) 737 MAX scandal as rivals Southwest Airlines, American Airlines, and United Airlines. JetBlue is the only major U.S. airline that doesn't operate Boeing planes in its fleet, meaning JetBlue should have no problem filling its expected 15 Airbus orders for 2020. 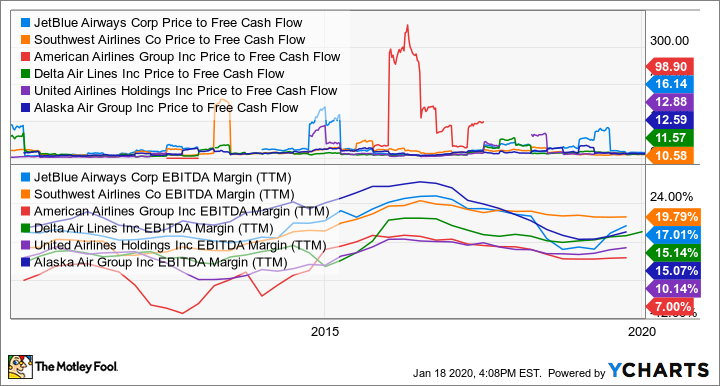 Another positive is JetBlue's earnings forecast, which is $2.50 to $3 for 2020. At a current price of around $18.70 per share, JetBlue's forward P/E ratio would be 6.23 to 7.48, placing the stock in value territory. Another strong suit for JetBlue is its EBITDA margin, which is second only to Southwest at a solid 17%.

The EBITDA margin is a company's operating profit as a percentage of revenue, providing an accurate reading of actual performance. EBITDA margin is a transparent indicator of a company's true profitability, meaning that JetBlue's current operations are impressive. That being said, slowing revenue growth paired with increased capacity could mean that margins will decline in the future unless JetBlue can reverse its trend of negative RASM growth.

All in all, JetBlue remains only about average relative to its peers in forward P/E and price to free cash flow (FCF). Price to FCF is an important metric to determine the cost of a stock relative to its FCF. Free cash flow is a means to fund growth outside of typical operations, such as returning cash to shareholders in the form of a dividend or buying back stock. In terms of its finances, JetBlue looks decent but not great compared to its peers.

For an airline, JetBlue appears fairly mediocre. JetBlue and United Airlines are the only two of the six major U.S. airlines to not pay a dividend. In terms of growth, negative RASM is disconcerting, especially considering Alaska Air is guiding for 1% to 4%  RASM growth compared to Q4 2018. American Airlines, which is hurting from the MAX scandal, originally guided for 0% to 2% RASM growth year over year in Q4 2019 but then guided down to 0% to 1% on Jan. 13, threatening to end its 12-quarter RASM growth streak. Still, the fact that JetBlue doesn't have Boeing planes in its fleet and is still guiding for negative RASM is a glaring red flag for investors.

JetBlue isn't a bad stock, but compared to other airlines such as Delta Air Lines, which recently blew past expectations, it lacks a differentiating factor to make it worth consideration at this time.