Please ensure Javascript is enabled for purposes of website accessibility
Log In Help Join The Motley Fool
Free Article Join Over 1 Million Premium Members And Get More In-Depth Stock Guidance and Research
By Will Ebiefung - Updated Jan 26, 2020 at 10:36PM

Management is making some ambitious projections for the space tourism business. But can they pull it off?

The commercial space race is heating up -- and the possibilities are nearly as limitless as space itself. First movers in this industry stand to monetize space tourism, space mining, and, of course, space aliens, should they exist.

Virgin Galactic (SPCE 7.90%) is a $3.4 billion company focused on the first of these -- the luxury space tourism market. It's set to begin commercial operations this year, and management expects revenue to increase by a whopping 580% -- from $31 million to $210 million -- between fiscal 2020 and 2021. Can the company make this work? It's a moonshot, but if things go according to plan, shareholder returns could be massive.

What is Virgin Galactic?

Virgin Galactic is a space tourism company founded in 2004 by British billionaire Richard Branson. When it went public in October through a reverse merger, it became the first publicly traded space exploration company. 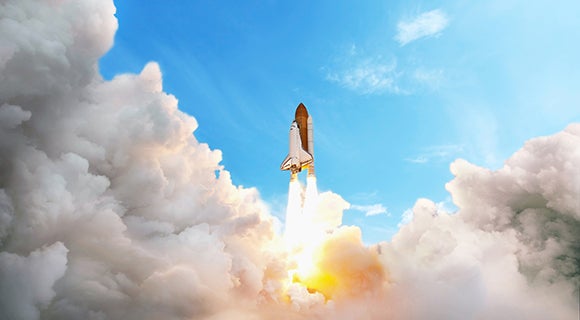 The business operates in two main divisions: Virgin Galactic, its consumer-facing tourism and customer experience arm, and The Spaceship Company, which is in charge of manufacturing and testing its aircraft.

Growth drivers for the near term

With commercial operations slated to start in June, Virgin Galactic is aiming for a rapid ramping up of operations -- hence that 580% predicted revenue increase. To make this guidance a reality, the company will have to expand its fleet.

Galactic currently operates an aircraft called SpaceShipTwo (SS2), a suborbital space plane that's lifted to release altitude by a cargo plane called the WhiteKnightTwo (WK2). The company plans to build two more SS2 aircraft by 2021, with a total of five by 2023. Each plane is projected to carry five passengers, each of whom will pay a ticket price of $250,000 per person.

Achieving these results depends on reaching the projected number of annual flights. Even for a millionaire, $250,000 is a large chunk of cash. Management is confident in the market, however, projecting a 6% annual growth rate in the number of people with a net worth of $10 million or more, as well as a growing demand for luxury travel services.

Virgin Galactic is in a good financial situation for such an early-stage business. It's backed by multibillion-dollar holding company Virgin Group, as well as its founder, Richard Branson, and several institutional investors. Galactic is debt-free, but it has sizable short-term financial obligations of $7.2 million on its balance sheet.

The company has a small amount of cash on hand, at $48.4 million. That's dwarfed by a massive balance of marketable securities valued at $677.1 million, which Virgin Galactic acquired from Social Capital Hedosophia, the company it merged with to go public. The marketable securities are short-term treasuries held in a trust account, and the interest from these treasuries goes toward net income -- helping offset Galactic's net loss from operations.

Virgin Galactic had a net loss of $482,184 in the third quarter of 2019, based on an operating loss of $4.2 million and offset by interest income of $3.5 million and an unrealized marketable securities gain of $258,197. Operating losses are to be expected from a company in such an early stage of development. Again, meeting the goals for number of flights and tickets sold will be key to whether the company can generate its projected EBITDA in the future.

Virgin Galactic's management is setting some very lofty goals for revenue growth, and if it meet its targets, the stock could soar. The good news is that management seems to have its finances in order; its cash position is solid, debt is zero, and its $3.2 billion valuation leaves room for equity raises if needed. On top of that, Galactic's ownership of The Spaceship Company may give it an edge over competitors that don't design and manufacture their own aircraft.

But are there enough people able and willing to shell out $250,000 for a trip to space? Possibly. (Neil DeGrasse Tyson is in favor, at least.)

It's hard to find a comparable example to space tourism, but perhaps it's somewhere between a trip to the top of Mount Everest and a chartered private jet -- both of which see sustained niche demand despite their seemingly prohibitive price points. According to Business Insider, people are already spending up to $130,000 to climb Mount Everest. And while Virgin Galactic's space trip is significantly more expensive than that, it's also much more exclusive. And, importantly, Virgin Galactic already boasts $80 million worth of pre-order deposits.

The stock is a moonshot, but with great risk comes great reward. It may have a place -- perhaps similar to that of a biotech stock -- in a diversified portfolio.