Please ensure Javascript is enabled for purposes of website accessibility
Log In Help Join The Motley Fool
Free Article Join Over 1 Million Premium Members And Get More In-Depth Stock Guidance and Research
By Adria Cimino - Jan 25, 2020 at 5:00AM

Mylan’s planned combination with Upjohn is a bright spot for investors, but the difficulties of the U.S. generic-drug market remain a potential obstacle.

Shareholders of drugmaker Mylan (MYL) are off to a good start this year, with an 8.4% gain after last year's 27% loss. The market may be thinking of the company's planned combination with Pfizer's Upjohn business, which focuses on off-patent branded drugs and generics. The deal is expected to close around the middle of this year and is a bright spot among challenges that haven't gone away. 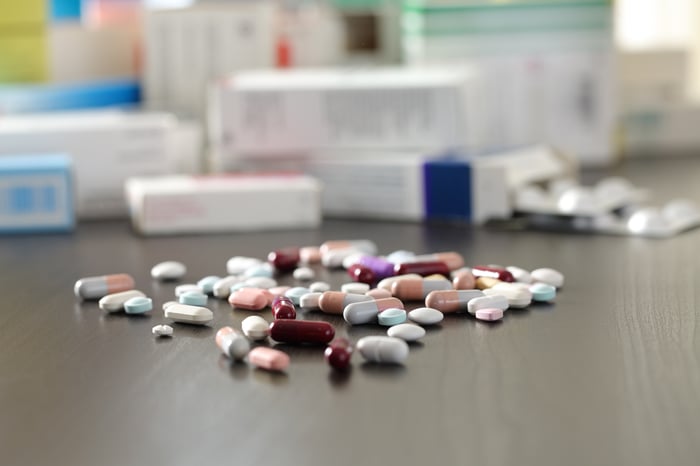 Mylan, a company best known for generic drugs, watched its stock slide last year after it was named along with other generic-drug manufacturers in a case alleging price-fixing. The lawsuit, brought by more than 40 state attorneys general, describes an industrywide conspiracy to fix prices of generic drugs. Rather than one quick blow to the stock price, this could be a drawn-out process that weighs on the shares periodically as the case unfolds.

The climate for generic-drug pricing in the U.S. is another headwind that isn't about to go away. According to an AARP Public Policy Institute report, generic-drug prices have generally declined over the past 15 years. In 2017, the retail prices of 390 common generic prescription drugs fell by 9.3% from the previous year, the data showed. And the average annual cost for one generic used on a chronic basis was $365 in 2017, down considerably from $751 in 2013. A new initiative by California, meant to lower healthcare costs for residents, could lead to further pressure on generic-drug prices: Gov. Gavin Newsom is proposing that California create its own generic-drug label and negotiate with manufacturers to provide the medications. If the state follows through on this plan, it would be another door leading to lower prices.

In addition to the generic-drug climate, earnings haven't been much of an incentive to buy shares of Mylan. Though Mylan beat analysts' earnings-per-share expectations in the third quarter, sales of $2.96 billion missed some analysts' forecasts for $3.01 billion. The company also narrowed its full-year total revenue outlook to the range of $11.50 billion to $12 billion. The highest end of the range was $12.5 billion, according to Mylan's earlier prediction.

Against this backdrop, the combination with Upjohn and Mylan's launch of a biosimilar to rival Roche's Herceptin are two positive elements.

Mylan launched Ogivri, a biosimilar of trastuzumab to treat breast cancer and gastric cancer, in December. Biosimilars are biological-drug products that are similar to another biological drug that has already been approved. Roche's Herceptin is a drug that brought in about $7 billion in sales in 2018. Ogrivi is a positive addition to Mylan's portfolio, but its importance shouldn't be overestimated, as it isn't the only biosimilar rivaling Herceptin. It is set to face competition from at least four others, including Kanjinti, a Herceptin biosimilar from Amgen and Allergan that was approved last year.

In the Upjohn transaction, each Mylan share will be converted into a share of the new company, which will be called Viatris, and Mylan shareholders will hold 43%. Shareholders of Pfizer will own 57% of the business. Pro forma 2020 revenues for the combined company are expected to be between $19 billion and $20 billion. Pro forma 2020 adjusted EBITDA (earnings before interest, taxes, depreciation, and amortization) is expected to be in the range of $7.5 billion to $8 billion. With a focus on returning capital to shareholders, the plan is to start with a dividend of about 25% of free cash flow beginning the first full quarter after the deal closes.

All of this sounds favorable, but investors should keep in mind Upjohn's latest earnings results. Third-quarter revenue fell 26% operationally as generic competitors for nerve pain drug Lyrica entered the U.S. market, and excluding the Lyrica impact, operational revenue fell 6%. Though Upjohn predicted growth in China, the picture in the U.S. remains lackluster.

Is Mylan a buy?

For investors specifically seeking to invest in a generic-drug maker, Mylan is a better prospect than competitor Teva, the main drugmaker cited in the price-fixing lawsuit noted above. Mylan's combination with Upjohn may bring investors dividends and a chance at better growth. That said, companies with a strong position in generics -- considering the environment for generics in the U.S. -- are not the best place to be these days. Mylan isn't a buy right now, but if you're interested in investing in healthcare, you might want to keep an eye on Viatris' first couple of quarters to see if this new company can make it past the headwinds blowing in the direction of generic-drug makers.