Please ensure Javascript is enabled for purposes of website accessibility
Log In Help Join The Motley Fool
Free Article Join Over 1 Million Premium Members And Get More In-Depth Stock Guidance and Research
By James Brumley - Jan 26, 2020 at 11:24AM

In fact, a smaller store base seems to have weakened the ones remaining in operation.

The idea sounded reasonable enough. If a struggling J.C. Penney (JCPN.Q) store is beyond salvaging, then cut it loose -- don't let dead weight drag the entire organization down. That's why the iconic retailer has been culling stores since 2012, and accelerated those closings in 2017. The company is hoping to scale back on quantity in an effort to beef up quality.

As it stands right now, though, eight years of store closures and about as many years of various turnaround efforts haven't helped. Indeed, the approximately 850 J.C. Penney stores still up and running appear to be doing worse, on average, than the stores that have been closed.

In short, whatever J.C. Penney is doing to drive customer traffic into its stores and then induce more purchases isn't working ... at all.

It's been tough to get a good feel for J.C. Penney's results. Investors know total revenue should be shrinking given its smaller footprint. And the roughly couple dozen locations it shed last year, followed by recently announced plans to shutter six more locations by April, make it clear the retailer isn't done yet either. 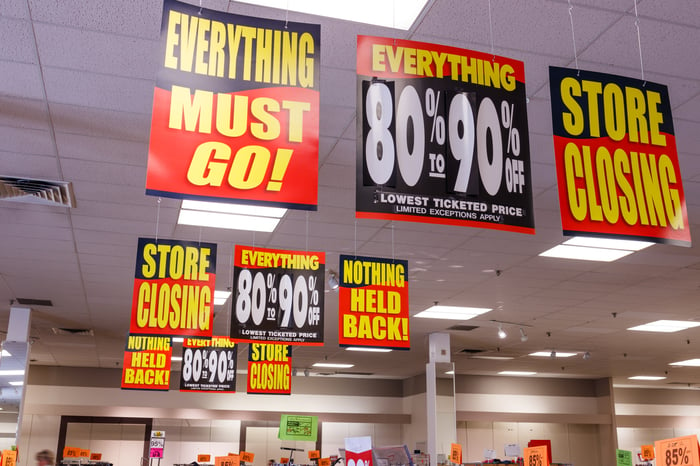 After years of right-sizing the business and adapting to the new world of retail brought on by Amazon, however, one would expect a clear sign that the closures are making a difference. Unfortunately, they're just not.

Investors did see a brief glimmer of hope in 2014, to be fair. Working its way out of damage inflicted by visionary but misguided CEO Ron Johnson in 2011 and 2012, the average store's revenue, gross profits, and operating income -- after allocating all corporate overhead -- began to rise again after years of deterioration. Specifically, the average store's sales grew from 2013's low of around $10.8 million to $14.7 million by 2017.

The growth wasn't meant to last, though. After per-store metrics improved in 2017 (mostly thanks to the closure of more than 100 locations), J.C. Penney is now about to wind down a second consecutive year of per-store declines on most fronts, despite more store closures in the meantime. Of its 850 or so units still in operation, the average store is on pace to deliver only a little more than $13 million in sales for 2019, leading to an average EBITDA of $607,000 per store. A year ago, those figures were $13.9 million and $636,600, respectively.

Perhaps most alarming of all is that the average store is not only in the red but increasingly in the red. Per store, J.C. Penney is expected to lose about $375,300 for 2019, versus the $33,600 loss each store suffered in 2018 after divvying up corporate overhead costs like advertising, distribution, and management salaries. 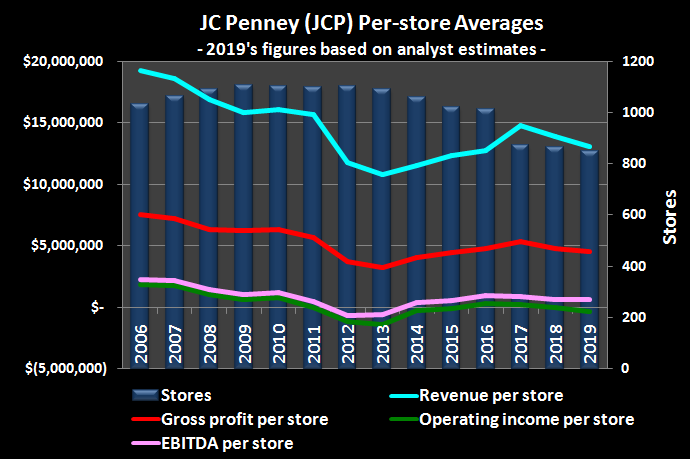 The per-store calculations are only rough estimates, mind you. The company didn't shutter all stores slated for closure in any given year exactly when the new year began (or at the same time), thus skewing the math. It's also easier to close a store and kill those costs than it is to reduce the corresponding corporate costs of operating that store.

It's not just J.C. Penney that's on the defensive, for the record. Close rival Kohl's also saw same-store sales fall 0.2% during the all-important holiday season despite pulling out all the stops to bring shoppers into its doors. Macy's saw a slight dip in same-store sales in November and December as well, setting up what's sure to be an extension of its weak same-store sales trend.

Given the backdrop, one can't help but wonder if J.C. Penney committed too much floor space to Sephora in its partnership with the cosmetics company, or closed stores it should have kept, or kept stores it should have closed. Perhaps the company sacrificed scale it didn't fully realize it needed until it was gone. That is to say, the mere existence of one store could drive traffic to other stores.

Whatever the case, if what the company continues to do within its remaining operations was going to boost traffic or up the average ticket size, we would have seen evidence of it by now. Per-store estimates for revenue, margins, and EBITDA all continue to dwindle, and by more than a little.

So for any investors out there looking for a deep value play, beware that what's ultimately broken with J.C. Penney is still broken ... a reality also underscored by what have turned into habitual same-store sales declines.